Cebu City: The Queen City of the South. My lovely asawa and I recently returned from a short vacation to do some shopping and to relax in the famed “Second City” of the Philippines, the oldest city in the archipelago. While I haven’t done anything to earn a sabbatical, my spouse has. My wife has been dealing with the construction of our new home in the Philippines for almost six months now, and needed a break, even though she would never admit to that.

We took a cruise on a ship from Cokaliong Shipping from Iloilo City to Cebu City. We paid 3,500 pesos, 77 US Dollars,  for a round trip ticket and stayed in an air-con cabin with four other passengers but at least we both got bottom bunks to sleep on. The air conditioning was extremely cold and I found myself covering up with a sheet during the nearly 13-hour trip, but I wasn’t complaining. I enjoyed the cold air. We shared a CR, Comfort Room, with the other four passengers in our cabin.

We could have gotten a private suite on the return trip for 2,500 pesos more, 55 USD, but opted for the cheaper cabin. However, a couple with a baby were put in our cabin as the outside Tourist Section, without aircon, was too hot for the baby. Thankfully, the young tot slept very well and barely cried. The crusty old expat also got a fairly good night’s sleep as well. 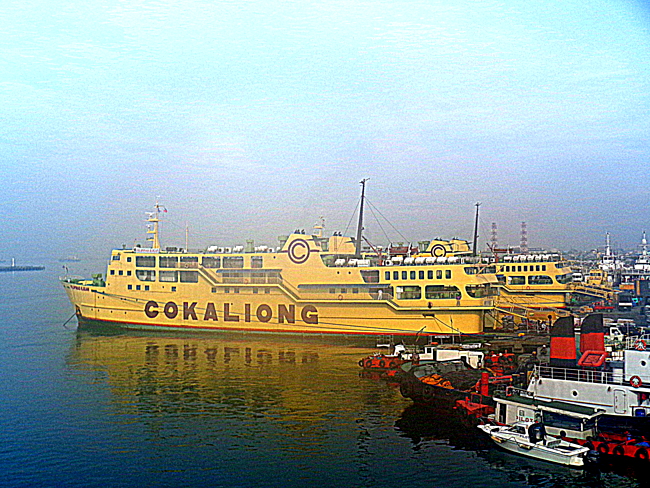 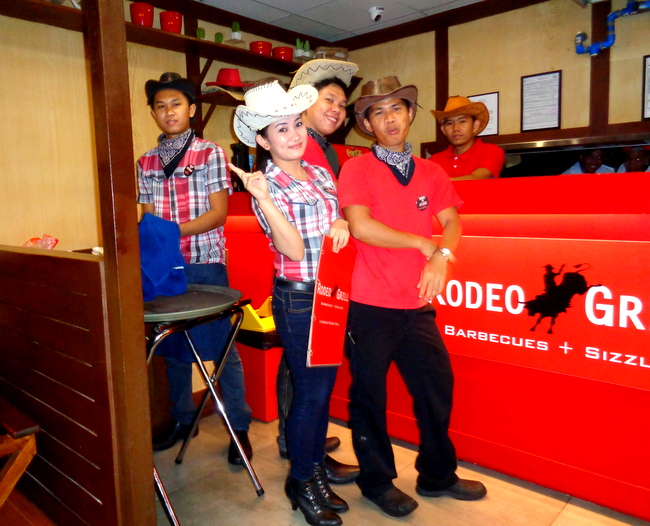 I always like to check out new eateries while on vacation, such as the Rodeo Grill at SM City Cebu. The staff, shown above, were quite friendly and very efficient. The food, however, was a disappointment. My wife ordered a rack of ribs that were too tough and my “Mississippi” Fish and Chips had excellently seasoned fries, but the fish was bland.

It’s not a place I would return too but the cute Filipina cowgirl in the pictures above and the friendly cowpokes, made it a worthwhile place to visit. I loved the following sign displayed at the eatery. 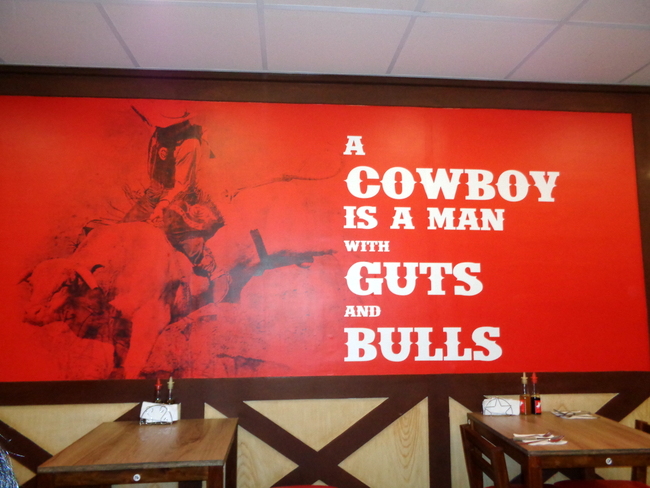 While the Rodeo Grill was a new experience, there was no way that I would let a visit to Cebu City pass without paying a visit (or two) to my favorite burger joint there, Flame It! On this trip to the Queen City of the South, however, we only devoured burgers at the SM City Cebu location and not the Ayala Mall unit, this time around.

Though the Cheese burger and fries I ordered during our first stop were good, I felt the burger wasn’t as juicy and flavorful as the hamburger I had eaten the year before at Ayala. I tried an Angus Burger during our second visit to SM City and that burger did had more flavor than the regular cheese burger. Plus, the eatery doesn’t use those pastel-blue buns I found a bit off putting during our trip last year. All the patties at Flame It are handmade and the service is excellent.

(Editor’s Note: If you visit the Deli at Ayala Malls’ Metro Supermarket, look out for cockroaches in the sandwiches. There was one submarine sandwich left that I was eyeballing but after spotting the cockroach inside the wrapped up sandwich package, I opted not to purchase it. I tried to explain to the salesclerk why I did want the sandwich but she absolutely no clue what I was talking about.) 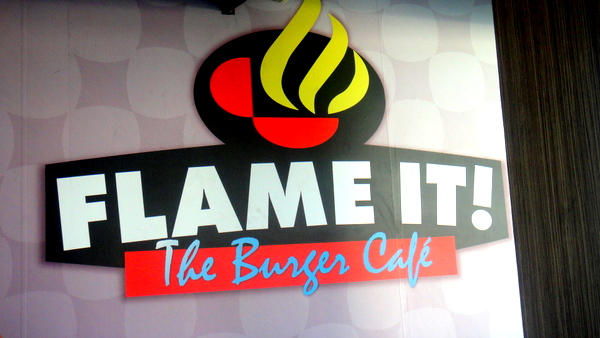 During our visit to Cebu City last year we stayed at the Alto Pension House and found the accommodations more than adequate. Though the price for a room had increased from 800 pesos a night, 18 dollars, to around 1,000,  22 USD, I called a day ahead of time to reserve our room for three nights.

We took off. But after a few minutes the cabbie asked me if this was the right way.

“Hell, I don’t know, “ was my irritated reply, “you’re the taxi driver. I thought you knew the way. Maybe we should have gotten the driver that knew how to get here.”

Fortunately I remembered the unique shape of the pension house and when we passed up the Sacred Heart Center, located directly next to the Alto, I told the driver we had passed it up. I spied new signage for the hotel as seen in the next photo. 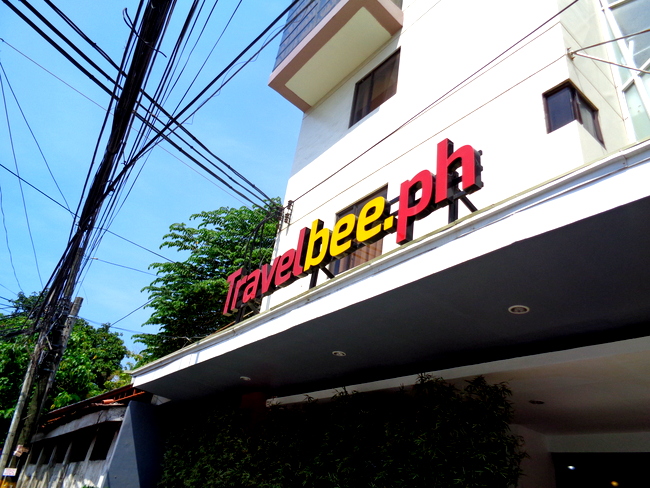 It was the former Alto Pension House. I approached the young lady at the front desk, the same one who had taken my reservations and asked her why she didn’t tell me the name of the pension house had changed. She informed me the hotel was sold to new owners last June. I told here we had stayed her last year but that the taxi driver had a hard time finding it. I advised her that it would have been a good idea to have told me about the new name.

When I used Google and entered the search term “Alto Pension House, Cebu” I found no mention of the Travelbee. Of course, now that I know the name has been changed, I found this link to the Travelbee website. There’s my lovely asawa in the next photo, relaxing in our “Double Beehive Hideout.”

That’s my spouse again, in the next picture, doing what she loves to do best: shopping. We spent a couple of days at the SM City Cebu location and one day at the Ayala Mall. Do yourself a favor and avoid the lower level Comfort Rooms at SM City Cebu if possible. I had to make an emergency pit stop at one and two out of the four stalls were absolutely disgusting with seats covered with feces. I pointed this out to the attendants on duty. Of course there was no toilet paper but I had a reserve of extra tissues from the eatery we had just visited stuffed in my pockets.

We spent one hour at the Robinsons Mall. Save your time and don’t even bother with Robinsons though our front desk clerk did tell me that a new Robinsons is under construction. I didn’t use the CR’s there. 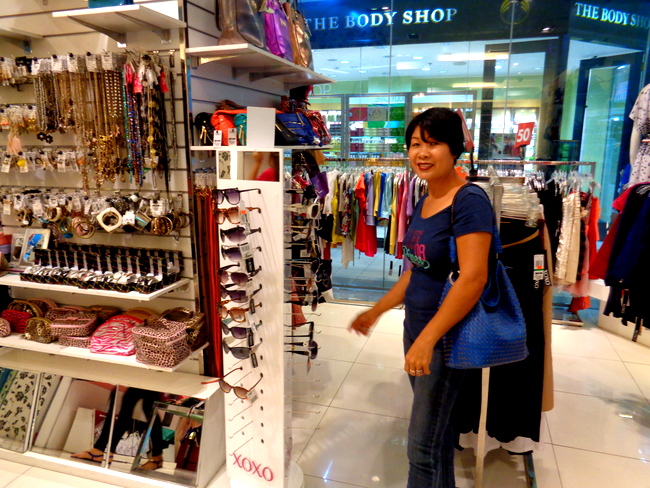 We met some new relatives, seen in the next shot, that my wife met on Facebook. Vhmiz, with son Josh, originally comes from Guimaras and is a second cousin of my asawa’s. Nice lady. Her husband was working that day so we did not get to meet him. My spouse had never met her second cousin before this visit to Cebu City. 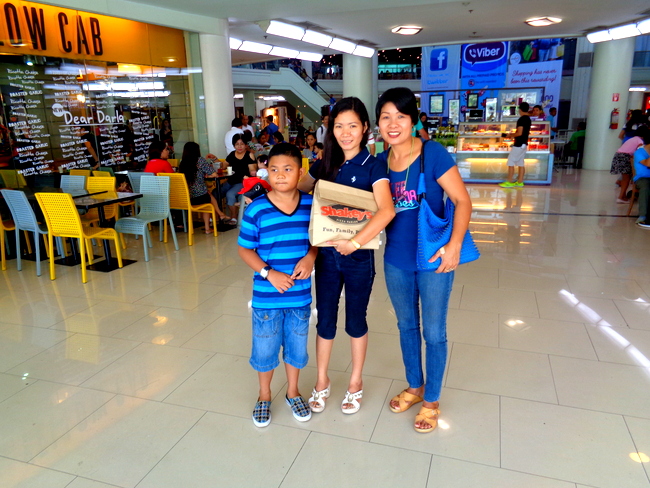 I don’t know what Josh was doing in the next picture, maybe reacting to my presence in the shot. 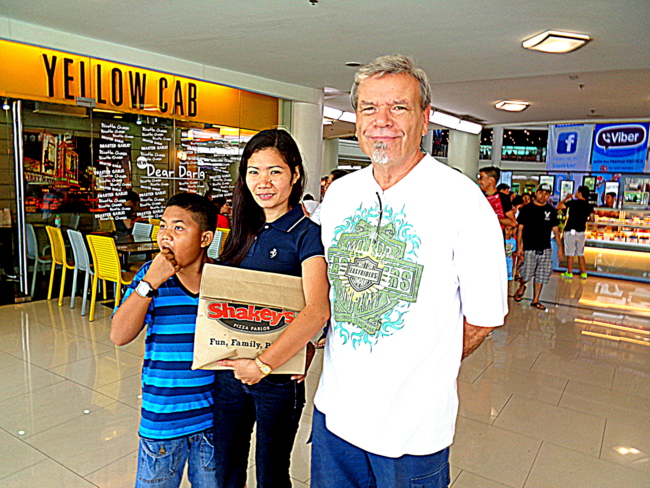 We had eaten at Shakey’s and honestly, the pan pizza we ordered was delicious. We had Vhmiz take the leftovers so her husband could have some of the pizza for supper. Josh played in the local video game joint while my wife and her cousin talked. I stood around for a couple of hours trying not to get bored.

We had a pleasant visit to Cebu City and we were glad we got to meet Vhmiz and her son. I was happy that my wife got a few days of well-deserved vacation and I was elated to get away from my father-in-law, Lolo. Regular readers of Philippines Plus know that Lolo, afflicted with dementia, has a propensity to talk to dead relatives and talk and sing throughout the day, annoying his crusty old expat of a son-in-law.

Yes, again, I know that my father-in-law has no control over his condition, but I would be less than honest if I told you that our upcoming move to our new house in the Philippines, where Lolo will have his own nipa hut separate from our abode, is something that I have been looking forward to for a long time. Thank God for the Cebu City break!

4 thoughts on “Cebu City: The Queen City of the South”