Road trip. Fergus and Rose. Nogas Island in Antique Province. Pale Pilsen.T-Ice. Great scenery. Swimming in the ocean. Pretty Pinays all along the way. How could I resist an adventure like that? Isn't that what retirement in the Philippines is supposed to be like? Exploring new vistas and enjoying life? My asawa and I have spent plenty of time cooped in our new subdivision home outside of Iloilo City. It was time to see what else Panay Island had to offer other than shopping at SM City or Robinsons. 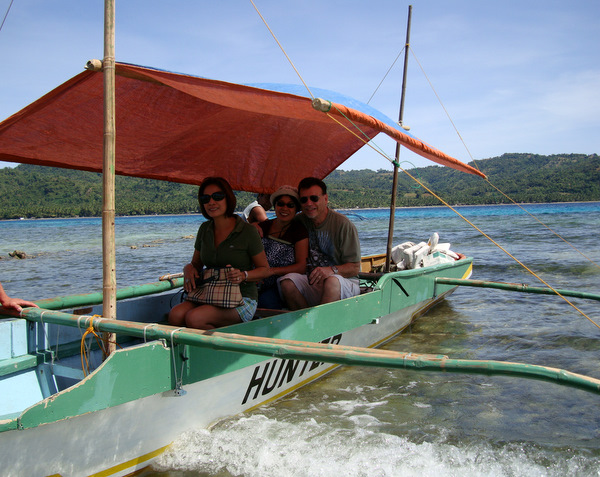 So when Fergus and Rose invited us to journey this past Monday to Nogas Island,  a 24-heactare government marine reserve approximately 3 kilometers off the coast of Anini-y, Antique on the southern tip of Panay Island in Western Visayas,  we eagerly accepted.

Left around 6:30 am with a cooler full of San Miguel Pale Pilsen, Tanduay Ice, bottled water and soda. Sunny, breezy day, just perfect for a trip to this unhabited island which also was home to a lighthouse and a giant Balete tree . I can't swim, but I figured I could pass the time taking pictures and drinking a few  bottles of Pale Pilsen.

About a 90-minute drive to the Sira-an Hot Springs in Anini-y where we would catch a boat to Nogas (round trip cost for 1-10 persons is P500, 11.58 US Dollars.) We were accompanied by RJ, Rose's cousin, who acted as our security and who also carried the majority of our gear. Fergus, who is much braver than I, and drives around Iloilo and the surrounding provinces of Panay Island, is adept at dodging dogs and kids that suddenly jump out into the street along with jeepney drivers that  make abrupt stops in the middle of the road without any warning.

We were about the only set of private wheels on the road aside from the aforementioned jeepneys along with a mix of motorycycles, trikes, and pedicabs (which always clog the road and slow down traffic.)  Many sections of the paved path to our desitination  were also covered with rice and copra that was spread out to dry. But Fergus patiently made his way through the obstacle course without any difficulty or spewing of profanity. Don't think I could have been as restrained.

We also traveled through the longest steel bridge in Western Visayas (.350 kilometers long and made of Pittsburgh Steel, imported from the United States; see photo.) 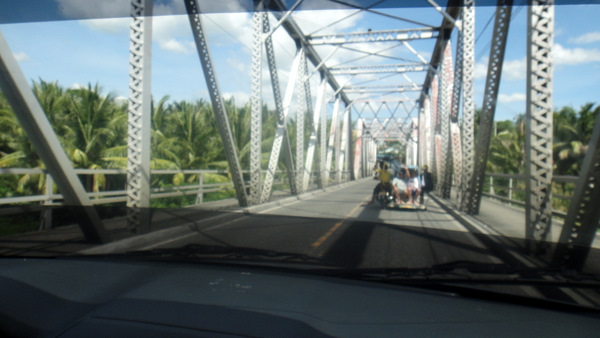 Made it to Sira-an Hot Springs and got out to stretch our legs and make arrangements for the boat ride to Nogas Island. Was around nine am, too early for lunch. Fergus, RJ and myself went to the shoreline to take some pictures while the ladies took a CR, Comfort Room break.

Fergus and I then walked over to the hot spring pools while waiting for our asawas. There were two big wading areas and the folks in the water were kind enough to let us take some photos. I heard a couple of "Hi Joe's!" from the group so I also snapped this photo of two pretty pinays who were taking each other's picture.  Everyone seemed to be enjoying themselves. I personally couldn't imagine wanting to go into hot water while living in the Philippines but would prefer a place I could cool off, but I suppose the springs have some therapeutic benefits. 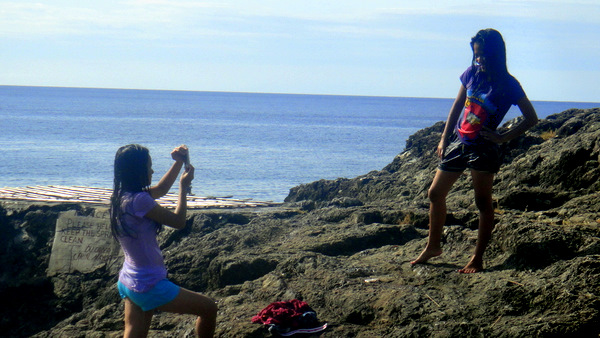 Could spot our island destination in the distance (see following photo) but couldn't see any pump boats which I was accustomed to riding in when living in Guimaras and going to the Ortiz Dock in Iloilo. Since I didn't have any San Miguel in my system yet,  I wasn't  extremely comfortable about going out to the island in the much smaller  vessel pictured at the beginning of this post. 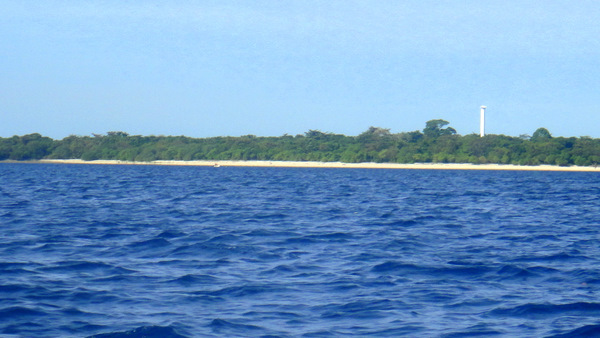 But with The Sainted Patient Wife holding onto me all of the way, I managed to plunk down in the middle seat and put a white-knuckle grip on the sides of the boat with both hands.  We made it to the island without me falling into the water and one of our boat guides (see next photo) had to help push the vessel to shore. We ended wading almost knee deep but made it to the beach unscathed. 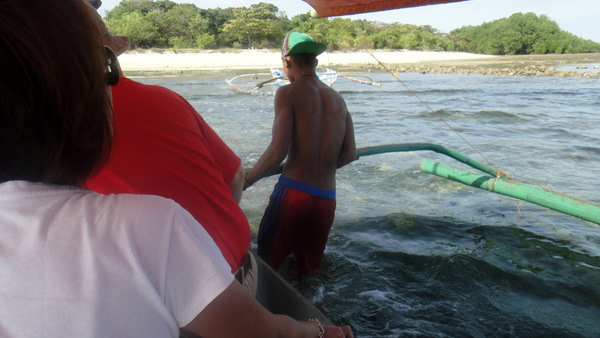 Next post I'll have some photographs of Nogas Island along with the lighthouse and tell of a family that we met who lived across from the beach and made their living fishing in the area. They were some absolutely friendly folks and treated me like a celebrity. More pictures and adventures coming up! 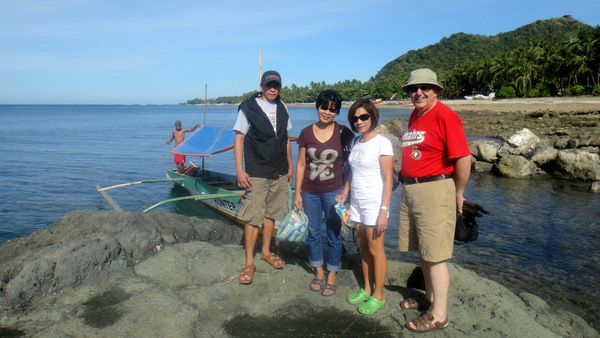