A recent new survey on our Guimaras property could spark a turf war. My asawa and I are set to start building our new domicile on the mango island province this November and had hired a survey firm from nearby Iloilo City to do provide us with a sketch plan. We could start working on our final design plans that we could submit to Peter, a local architect and trusted relative, who could transform our rough sketches into a blueprint our construction crew could work with. 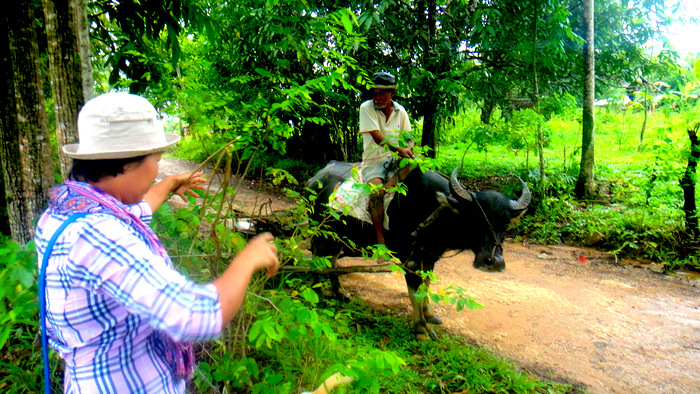 The brother, who is stationed on an oil rig in Galveston, Texas, comes to Guimaras every few months and would not be available again until December. My wife and I both wanted him to advise the survey group as we wanted all parties concerned to agree on the lot’s boundaries, as we  did not desire any possible property disputes once we started building.

We had decided to use an outfit from Iloilo City, Santome Surveying Office, since we had employed their crew five years ago to do a survey on my wife’s property on our mango province that I fondly call “The Compound.”

We scheduled the surveyors to come out on Monday as the owner’s brother had to return to Manila in about a week to prepare for his return to the oil rig job. The cost of the survey was pegged at 15,000 pesos, about 336 US Dollars. More than I had expected, but as my wife pointed out, the survey would cover 7,020 square meter where as our other lot is only 240 square meters. That previous survey cost 600 pesos, 13.50 USD. 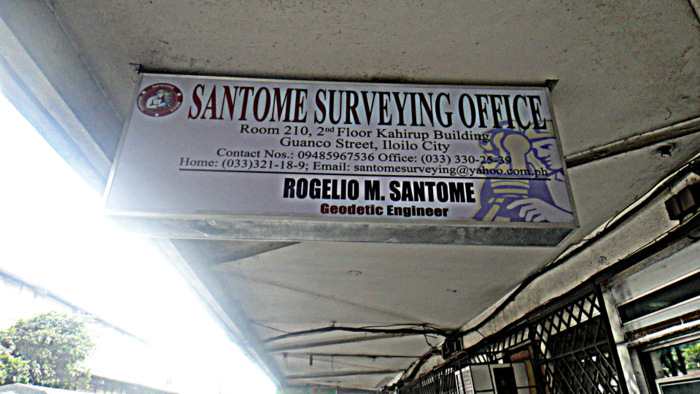 The crew hit town around 9 am Monday morning and my wife met with the group, seen below,  comprised of three men, at our local Sari Sari Breadstore. It was taking a while for the group to walk over to our driver’s trike as I wondered what the delay was. It seems that the posse’s leader,  with the dark blue shirt, was asking my asawa if we had a land sketch. What land sketch? That’s why we hired the surveyors in the first place. Things weren’t getting off to a good start.

My wife fired off a text message to the brother that would be waiting for us. He replied he would check with his sister for the plan. 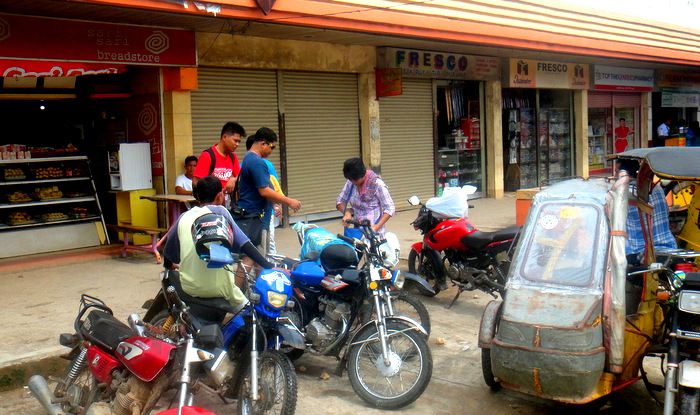 The group finally boarded the trike, operated by our regular trike driver, No No,  and transported the crew to the property, about a 25-minute ride, while my wife and I stopped off at “The Compound” to pick up our brother-in-law Joery who was going to set up some concrete markers he had made to help mark the boundaries of our new lot. That’s No No’s trike shown parked on the private road which leads to our lot. 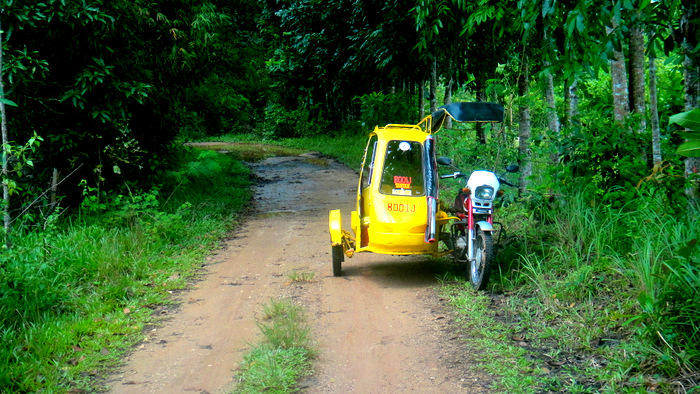 Here’s a view of our new property in Guimaras as seen from the road. It’s very quiet and peaceful which is something my wife and I both desired as I had no desire to live in a noisy, crowded subdivision as we did when we spent two years in Savannah in Pavia, Iloilo, which was touted as one of the “premier”subdivisions. With running water only available to us three times and week, and 25-30 brown outs, power outages, a month, I would hardly describe the enclave as a “premier” subdivision. 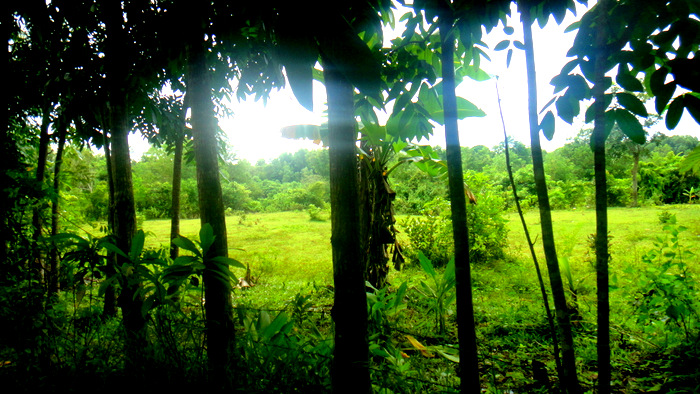 The following photo shows the power lines that stretch across our lot. Joery spotted the main utility pole located very close to our lot, so we should not have any problem getting power to our location. When the actual construction begins in November, I will have our resident computer whiz come out and check on getting an internet connection for us as he did when we went seven months without the World Wide Web at our present residence at “The Farm.” 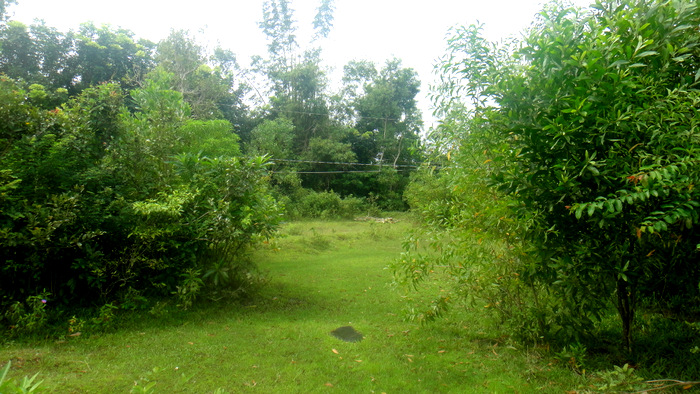 That’s my spouse headed out to where the surveyors where located and checking out the property line of the seller’s niece, who had since arrived at the scene. The land sketch had not been located as the brother who was going to advise the surveyors, was told be his sister that he had the plan. So he takes off in his vehicle to look for the “mother lot”sketch which the surveyors said they needed. It looks like they were having trouble establishing the eastern boundary where the niece’s lot was located. 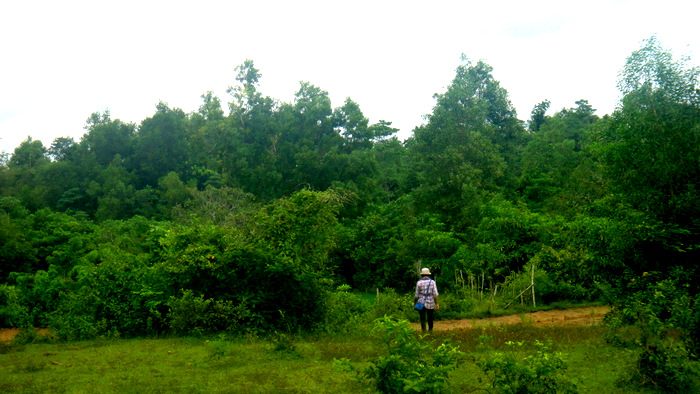 My wife returns and joines Esther, the agent/manicurist, who originally told us of the property. There is a discussion with the niece and the survey crew and the surveyors want to return to finish the job. With the master land sketch, which their boss in Iloilo told them we had, they could not continue the survey and “compute”the sketch plan for our lot. The niece wanted to see the “mother lot”plan before she would agree to any boundaries.

The seller’s brother advised my wife that the niece had taken 250 square meters of the lot and the the the seller had taken some of their land in return. What it boiled down to was that the ownership of 500 square meters was in dispute. I told our agent, Esther, in no uncertain terms, that if the survey showed we did not own 7,020 square meters, as per our agreement, the deal was off. She relayed that information to the brother who assured me that everything would be straightened out with his niece by the time the crew returned a few days later on Thursday.

I shook his hand and said I hoped he was right.  I did not want any turf war with his relatives. 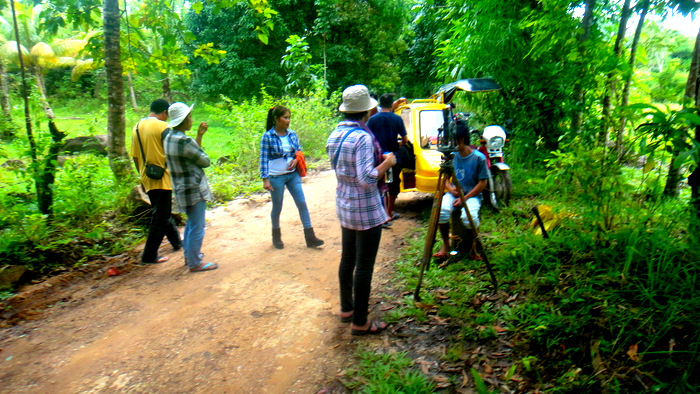 As my wife looks on, we head back home as our driver takes the survey crew to the jeepney stop to catch the banca boat back to Iloilo City. Thursday would reveal whether or not the property disagreement would be settled or if we would be looking for a new lot in Guimaras. 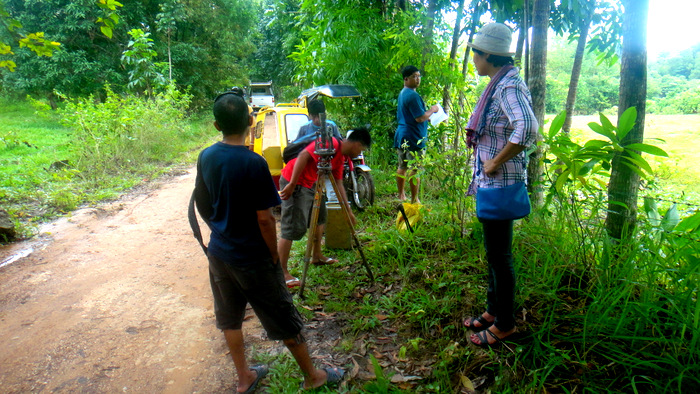