During a recent shopping sojourn to Bacolod City, the “City of Smiles,” my asawa and I were impressed by several things. The friendly people and the stores that actually hired more mature workers, impressed me. The public transportation system was cheap and easy to use. The cab drivers were honest. The Check Inn Pension House where we stayed was affordable and centrally located and had a decent restaurant where we had a couple of meals. But two incidents during our three day stay are worth noting, especially to any expats that might be planning to visit Bacolod. 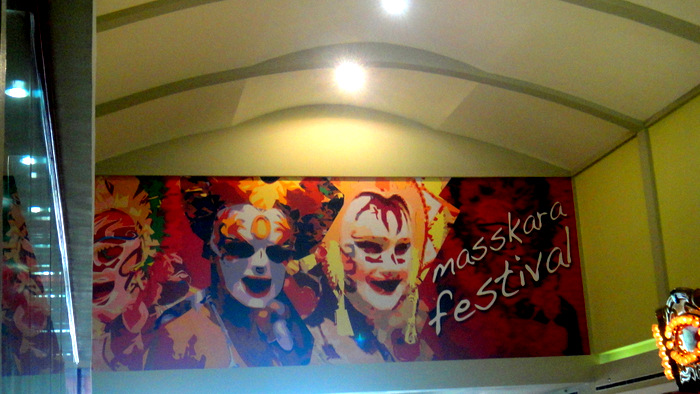 Our accommodations were in the heart of downtown and the sidewalks, like Iloilo City where we do the bulk of shopping, were narrow and crowded. One has to exercise caution when traveling in the Philippines as a foreigner and the first incident I will mention caught me totally off guard.

My wife and I were walking about two blocks from our hotel when my asawa whispered to me that two young guys were following us. I stopped dead in my tracks. The two young men quickly veered off to my left and ran across the street. They knew they had been “made.”

My spouse had noticed the pair standing around as we passed them up.  They split up after spotting me and the one quickly walked ahead of his partner trying to catch up with me. They were going to try and box me in. My alert asawa had no doubt that they were going to rob me, possible taking my Samsung Tablet which I carry in my “man purse” in front of me.

Now I feel foolish for not being alert, something I preach in one of my books, “The Philippines Expat Advisor.” There was absolutely no excuse for me not being on guard and for letting the pouch that held my tablet hang so low, at waist length. I quickly cinched up the bag until it came up near my left armpit where I could keep it more secure and safer from another attempted robbery. Lesson learned. 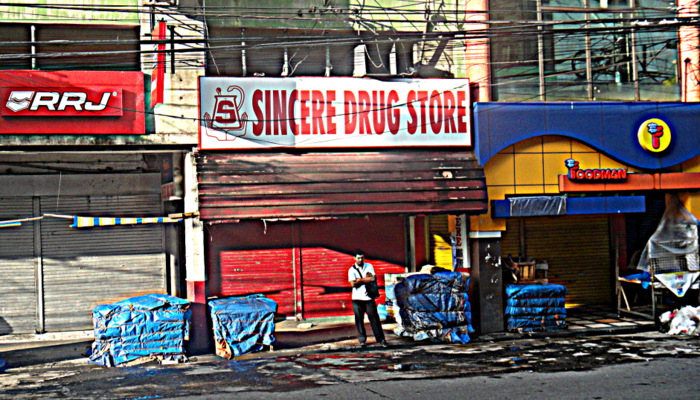 The second incident happened on the next day, a Sunday, when my wife and I were headed over to catch a jeepney to the North Terminal as we headed toward the Ayala Mall. We were only a few blocks from our hotel again when a Filipino man, in his early 40’s approached my wife. They stopped and chatted in the local Ilonggo language which I don’t understand and thought the man was a relative who was visiting Bacolod.

But when the man emptied out his pockets and held a lone ten peso coin outstretched in the palm of his hand, I had no doubt a scam was being attempted. The man was no relative but my wife had sworn she had seen the guy in Iloilo before. The scammer, who was asking money to visit a sick relative in the hospital, a favorite scam in the Philippines, claimed to be a taxi driver in Iloilo. 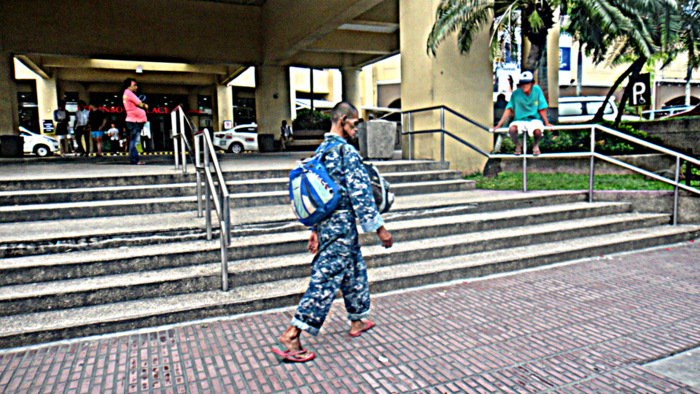 A man in camo walking by the local Robinsons Place

I advised me wife the man had conned her and put the idea into her head that she had seen the guy before. But my asawa claimed the man, when he approached us, said to her: “So you’re here now and not in Iloilo?”

Whatever the case, the scammer received no handout from my wife who certainly was targeted because she was with a “rich kano” that he thought could be his own personal ATM.

In over five years of living in the Philippines, this is the only time we have been approached by such a scammer. Of course, beggars in the Delgado district of downtown Iloilo regularly confront us, but aside from an incident at Glorietta Mall in Metro Manila, when I first arrived in the Philippines to get married to my amazing asawa, we’ve never had a problem with theses scammers.

When I arrived in the Philippines in January 2000, my future spouse and I went to the Glorietta Mall in Makati City to buy her wedding ring. As we were shopping in the mall a Filipino gentlemen approached me and said “Hello, sir! Do you remember me? I am your security guard at your hotel. Could you give me 600 pesos for my daughter’s birthday today so I can buy her ice cream?” 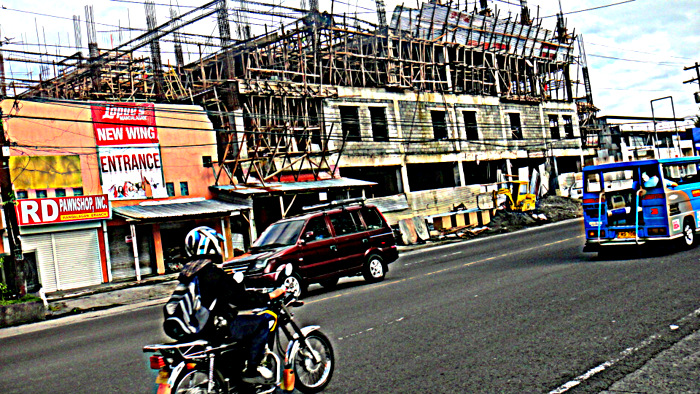 I was taken aback, and since I had only been in the Philippines a couple of days, and I was staying at a hotel, I gave the man the money as I did not want to appear cheap in front of my soon-to-be wife and didn’t want any trouble with any security guards at our hotel.

As soon as the man left, my future wife said she was ashamed of the behavior of some of her countrymen, and apologized. I told her there was no need for an apology, and advised her that I had doubts about the man’s story, but went ahead and gave him the money to avoid any trouble. Yes, I was scammed, the man wasn’t a security guard at our hotel, but I learned from it.

But the two incidents didn’t dampen our visit to Bacolod. We had a thoroughly enjoyable time in the “City of Smiles”and would recommend anyone visiting the Visayas region of the Philippines,  where we reside, to include Bacolod in your travel plans.