I was schlepping over to “The Compound” to visit our niece and nephew last Saturday. A scorching sun was handing me a shellacking but I had my trusty bottle of tubig (water)  with me. Along the way, near The Shirven Hotel, I encountered a Philippines road construction crew on our island province of Guimaras. The guys took a break to mug for the camera as they saw me taking photos of the new highway improvements being done in our area. Here’s a few members of the crew in the following photo, one of the workers pretending to bash in the heads of his fellow co-workers with a shovel. Talk about violence in the workplace! 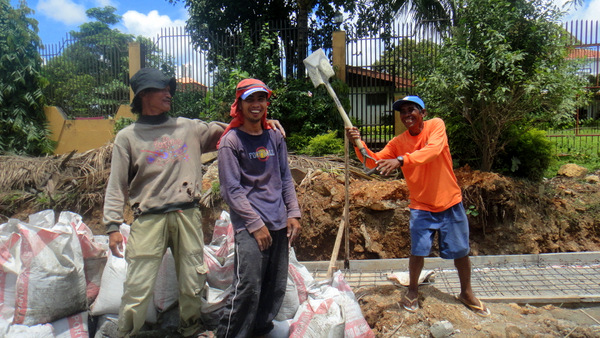 These are gangplanks being used for pedestrians to enter the local businesses from the road. New concrete sidewalks are being poured in some areas. Sidewalks are a rarity on our mango island province and will be especially helpful for the locals to navigate around town especially during this rainy season.

Check out some Filipino ingenuity. Here’s a bamboo pole, painted with black and yellow stripes, and set in a used Boysen brand paint bucket filled with concrete. These poles are used as barriers, along with concrete bags filled with dirt and rock, until the concrete is cured.

Also, in order to keep track of when each section of pavement is poured, along the way I have seen blocks of concrete, such as the one shown below, which note the location and date that particular segment of road was done. 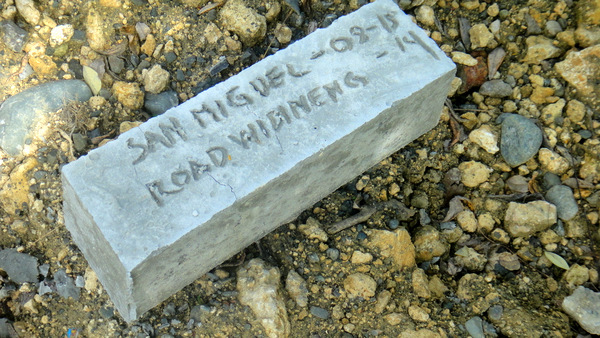 I’ve seen a lot of dog tracks whose paw prints are embedded in the freshly laid concrete. Many of the road tracts have tarps covered over them once the concrete is poured but I guess there wasn’t enough tarp to go around in some localities. 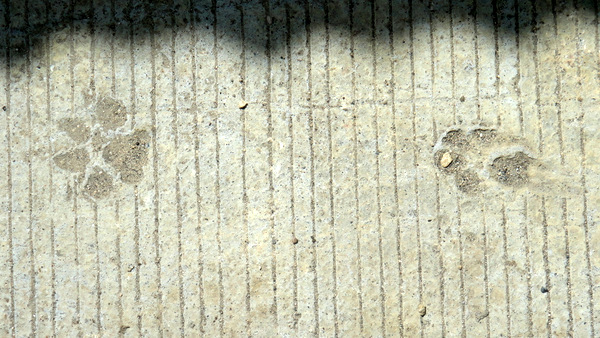 Of course, if you have dogs in the Philippines, you’re going to have chickens and roosters hanging out, too, as shown in the next shot. I haven’t seen any cow, carabao or goat prints yet but there’s still lots of road construction to be done. 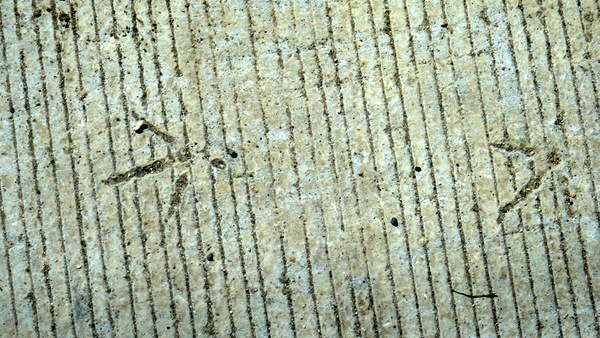 Here’s another look at the construction crew in Guimaras as they mug for the camera. Despite temperatures of 30 degrees Celsius  these guys were upbeat and friendly. 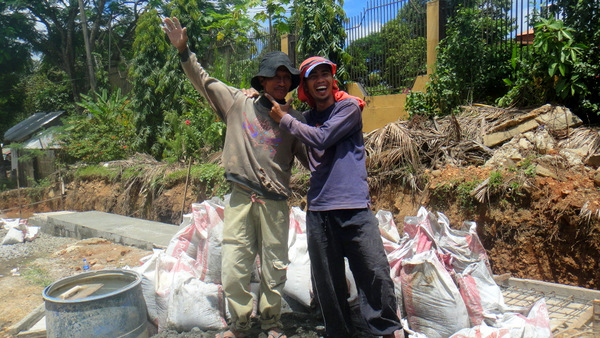 I have been told that one of the engineers employed on the project is allegedly taking a cut from the wages each employee earns, thus reducing the daily wages of each crew member.

The workers, desperate for a job, are helpless to do anything and this engineer knows it. There are no labor unions or other organizations on Guimaras that can help them but I wonder how the Australian government, which is funding these road improvements, would feel about this injustice.