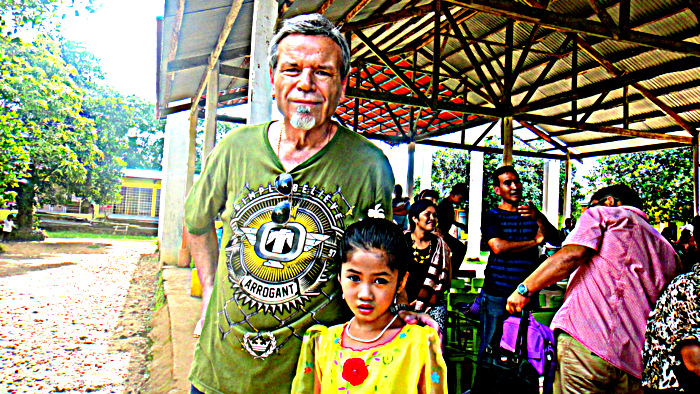 My asawa and I attended the SPED 1st Quarter Culminating Activity held at San Miguel Central School in Guimaras. Our niece, JalAmiel, and nephew, Jorealle, her brother, are in advanced classes called SPED, Special Education.

Now I know what you’re thinking. Back in the States, “Special Education” denotes classes that are geared to individual with disabilities. But at the public school my niece and nephew attend, children that are tested to be advanced learners, like JalAmiel and Jorealle, are all included in the SPED category, though they are not in the same classrooms as youngsters that are blind or those with  Down’s syndrome.

In the Philippines, those Filipinos with special needs are called PWD’s, Persons with Disabilities. Though if the kids were all put together in the same classroom, I think that the social intermingling would be good for all the students involved, disability or not.

That’s “The Kano” with our little niece, JalAmiel,   in the lead photo. Amiel had to recite a poem with five other children and was dressed in a native costume. The event we attended was held this past Friday. I was told that Amiel’s poetry reading would be done on the Thursday before but that she would repeat the reading on Friday where her brother Jorealle would be doing a dance number.

But it turns out that JalAmiel did not recite her poetry number on Friday but instead participated in another activity onstage with her classmates. When I asked my asawa “why” I was given a confusing answer I did not comprehend but decided to let it go. You married guys out there will know what I’m talking about. 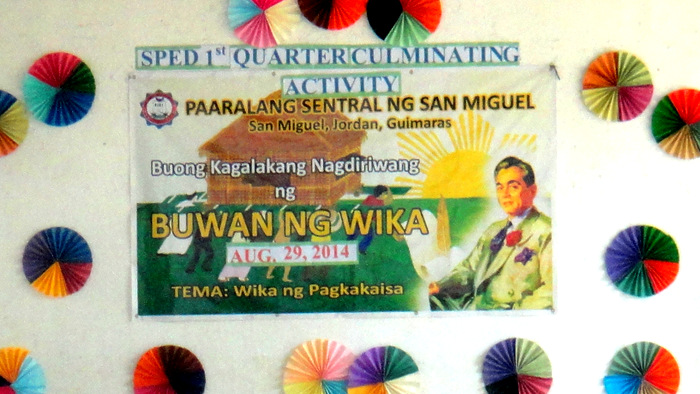 That’s my sister-in-law Alida on the left standing next to my lovely asawa and Alida’s husband Joery, with JalAmiel up front in the next picture.  Alida and Joery are the proud parents of  JalAmiel and Jorreale. They also have a daughter, Den Den, enrolled in the Santa Teresa High School. 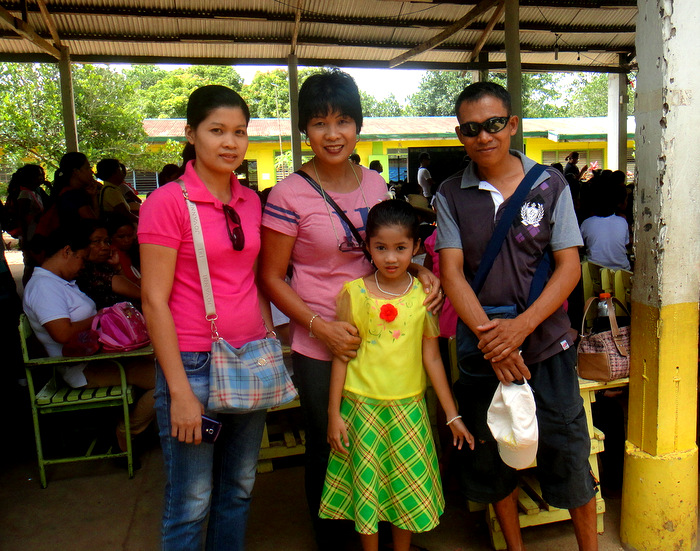 That’s me, The Kano, again, with The Sainted Patient Wife. You have to be patient being married to me for almost 15 years. Of course, there’s Amiel on the right looking on at the program being held onstage. The event which was to begin at 1:00 pm, started at 1:30 pm, only 30 minutes later than scheduled. Not bad for a culture steeped in “Filipino Time.” 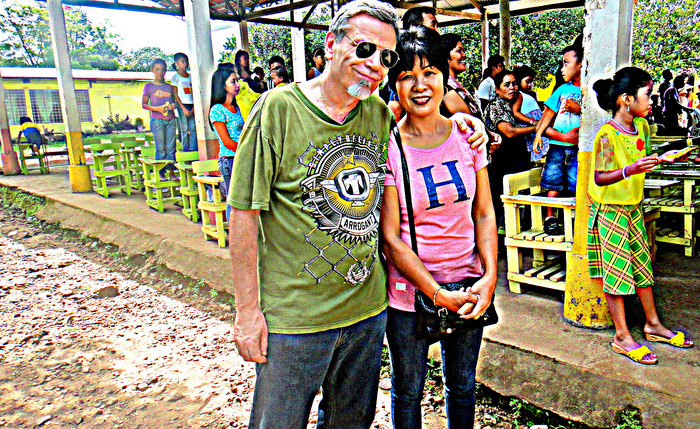 OK, I call our nephew’s outfit, shown in the picture below, a skirt. It has a Filipino name for it but since I’m writing this post a few days after the event, I can’t recall what my wife told me it is called in the local language. She’s upstairs shaving a coconut to cook with some vegetables for Sunday dinner and I’m too lazy to walk upstairs to ask her again what this outfit is called. She’ll only get irritated with me for asking again anyway. 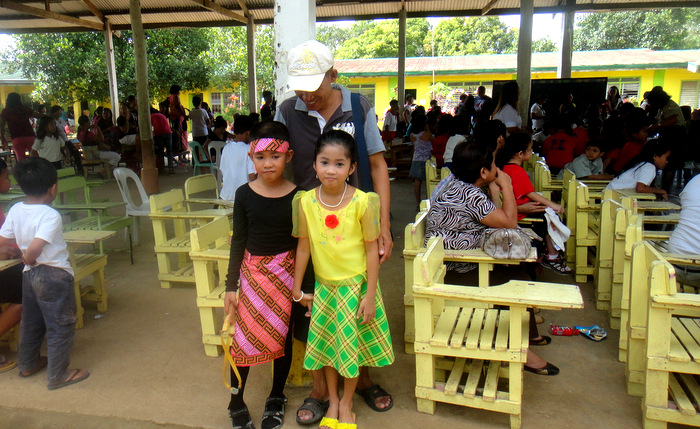 JalAmiel’s in the back standing next to the big kid holding the Philippine flag in the next photograph. I’m not sure what this activity was all about since the entire program was naturally done in the local language, Ilonggo. I recall some kid prancing around the stage waving the flag before handing it over to the kid in the barong tagalog, but that’s about all I got out of it. 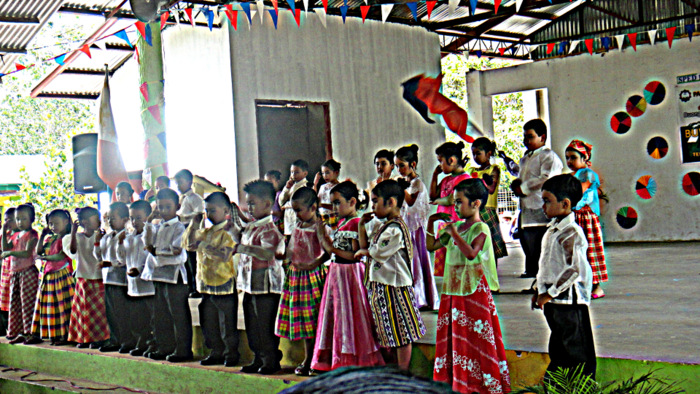 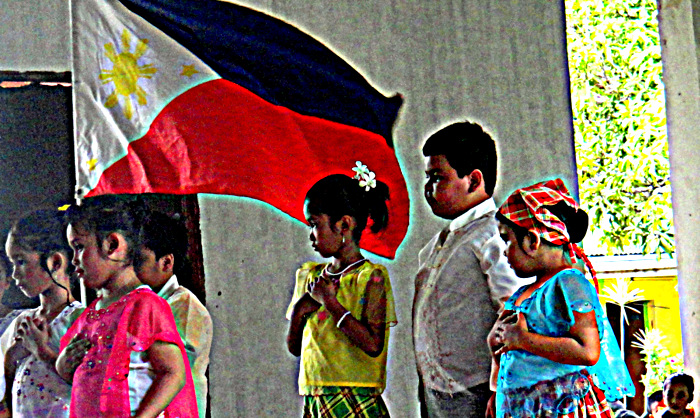 A closer view of the flag ceremony. 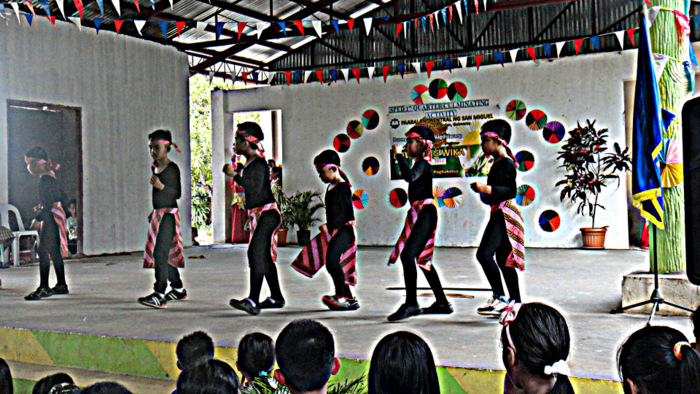 Here’s Jorreale and his fellow dancers. How in the world the teachers convinced these boys to dress up in black tights and a pink skirt is beyond me. My nephew, on the far left, was armed with a slingshot and I believe the guys were depicting fierce Filipino warriors. but in those outfits I don’t how they could really intimidate anyone. I, of course, teased our nephew about his attire.

The entire program lasted nearly two hours but my asawa and I wanted to show our support for our niece and nephew. We don’t have any children of our own but believe it’s important for the kids to know that we believe that their education is important and something to be taken seriously.