As Dave usually writes about enjoying an iced cold Pale Pilsen with friends while relaxing on the second floor atop the UR Zone in Iloilo City, I sit and stare out my window here in Tupelo, Mississippi. And while him and his friends savor the taste of the best beer in all of Asia, I still long for the day I can return to the easy life in the Philippines. 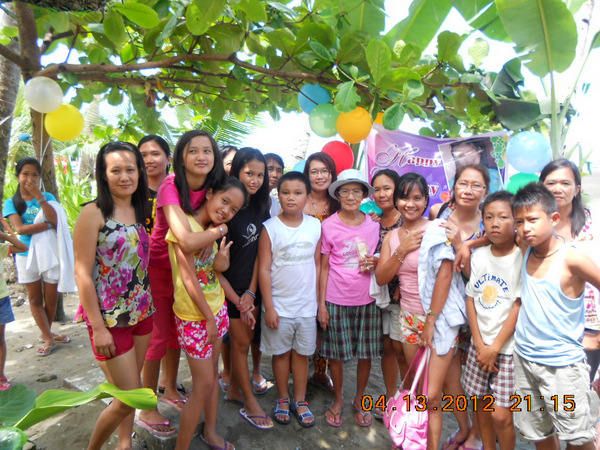 Of course the easy life is a relative term and comes with the connotation that one doesn’t have to do much of anything if one doesn’t want to. Many things can simply wait until tomorrow to be done or, with very little peso-persuasion, tasks can be done by someone more willing. I call that having ‘peso-nality’ which simply means having the ability at will to spread the wealth around.

A few pesos here and a few pesos there will usually muster up any number of volunteers for anything that resembles labor, combined with a thankfulness from those that earn their share. So it can be a relatively easy life in the ‘Domain of the Golden Dragon’.

I can remember once when visiting a Guam Beach back in 1974, fully dressed in the uniform-of-the-day (shorts, t-shirt and flip-flops), and having the beach all to myself – smack-dab in the middle of January! With my feet buried in the cool white sand and my snorkeling gear and cooler of water and beer at my side, and an ocean vista to die for, all I could think about what my friends were doing back home in Illinois.

I knew exactly what they were doing…freezing their hinies off while shoveling snow! After another beer or two and a few more passing thoughts of frigid winter-like scenarios, I quickly nominated myself as an excellent candidate for full-time living in the Domain of the Golden Dragon. BTW, I only needed one vote, and it was an overwhelming majority! The hard part was figuring out how to do it. For what it was worth, I smiled a lot that winter.

With the extensive Navy operations In the Western Pacific since (and before) World War II, this unique passage has become so common that few initiation ceremonies actually take place these days. But the certificate, decorated with a Chinese-style dragon, will still find its way to a spot on that sailor’s wall at home. 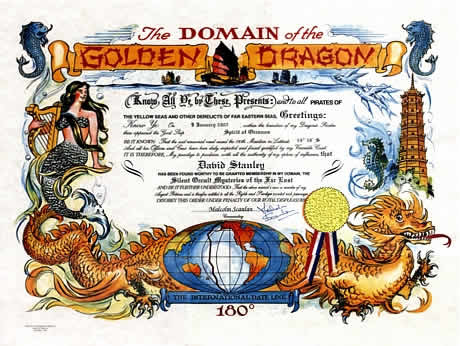 As a career Navy man, I’ve had the privilege of crossing the Dateline on several occasions. The dateline is actually the longitude of the 180th meridian, both east and west. It’s the meridian opposite the Prime Meridian which joins the north and south poles and passes through Greenwich, England. I was lucky enough to actually go through the ceremonious hazing during my first crossing I received my certificate, which I proudly display on the wall in my man cave.  It reads as follows:

Know, All Ye by These, Presents: and to all pirates of the Yellow Seas and other derelicts of Far Eastern Seas, Greetings: Know Ye: On 5 August, 1986, within the boundaries of my Dragonic Realm there appeared the Good Ship USS Beaufort (ATS-2). Be it known: That the said renowned vessel crossed the 180th Meridian in Latitude 17-41N. All her Officers and Crew have been duly inspected and found qualified by my Venerable Court. It is therefore, my privilege to proclaim, with all the authority of my sphere of influence, that Randy Landis has been found worthy to be granted membership in my domain, the Silent Occult Mysteries of the Far East. And be it further understood: That the above named is now a member of my August Retinue and is therefore entitled to all the Rights and Privileges accorded such personages. Disobey this order under penalty of our royal displeasure. L.G. Nibbs, Commanding.

Back to Guam. Although I first arrived there in 1974 (via aeroplane), tradition has it you must ‘sail’ into the domain to be considered for the rights of privilege. But, the fact that I didn’t sail into the domain until 1986 has nothing to do with my early attraction to Far East culture. My arrival in Guam at the ripe age of 19 provided me my first look at this unique culture AND beautiful Asian woman.

You see, even though Guam is essentially still the USA (incorporated territory), the local culture results from a blend of local Chamorro (Guamanian) and Filipino, with Caucasian, Japanese, Korean, some Chinese mixed in. While many of my Navy cohorts would sit around the barracks day-in and day-out and complain of nothing to do, I immersed myself in the island lifestyle and quickly fell in love with the uniqueness of Asian life.

Three of the four “B” ingredients required [good time recipe] to have a great time were always readily available –  Beaches, BBQ’s, and Beer. The 4th“B” which stands for “Babe’s”was a hard to find ingredient, most times. I beached a lot, snorkeled, learned to dive, fished, did some cliff diving, learned to fly, fished, boonie stomping (island exploring), bought a boat, ski’ed, fished,and literally moto-crossed myself around the island.

Did I mention fishing? I attended Fiesta’s, Novena’s, and even played in local card games and learned to play Maj-jong. I even attended a cock fight or two. For me there was plenty to do and discover (remember, I’m a flatlander from Illinois).

One of the more difficult things to do there was find a good woman. There were plenty of women on the island but it seemed like they were part of an endangered species or just maybe just a protected species, administered by their distrustful older male family members.

It was rare to find local girls out partying or simply unaccompanied and, except for a handful of nightclubs with mainly Korean ‘buy me drink’ ladies, there weren’t many places to go to meet women (except the USO, and that’s a story for another time).  Island women of other ethnicity such as Japanese, Korean, or Chinese were more difficult to meet, mainly because of the stronger and more extreme cultural differences and language barriers.

Filipino is the second largest ethnic group on Guam totaling over 25% of the population. Aside from the Chamoro culture, Filipino food culture had woven its way into mainstream Guam life and living, where every week there was a fiesta and every fiesta consisted of pork or lechon, red rice, pancit, lumpia, and many other Filipino descended delicacies. There was always beer, adult beverages and tuba (a locally made coconut sap liquor). 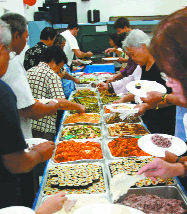 Guam was truly a melting pot of Asia if you will, sauteed with Chamorro, stir-fried Asian, and flavored with a touch of Americanism. After spending nearly 5 years (off and on) living on the island,and 3 years living in the Philippines (where I met my beautiful asawa), it left me with an unending desire to return to the ‘Domain’ forever.

From my early days there and since then, I could never cure myself from the addiction to this culture. I didn’t want to. Now some of you are probably thinking Guam?…I never thought of that!  I say go ahead, but you better have a boatload of money or a really high paying job to survive there. Guam is beyond expensive.

Back to the Philippines. To me the Philippines is a lot like Guam, but on steroids. It’s not so small that you will get island fever like Guam. It has many more beaches and lifestyles to choose from. The friendliness of the Filipino people, combined with their natural and genuine nature to please, is unlike nowhere else. Their hospitality in Asia is second to none, and to many foreigners, the ability to live in an environment where the government still trusts you to make you own responsible decisions can be of paramount importance.

Many Western cultural and liberties have been lost or taken away, and probably forever. If you can immerse yourself into the culture of the Philippines like many others do,you will discover there is a richness about living there and it has nothing to do about having money, being rich, or having an abundance of material things. It has everything to do with having a good loving woman at your side, and being surrounded by a culture of caring people.

On occasion you may hear an expat say they that they crave for a certain food or a miss particular western convenience, or they might think out loud about missing the seasonal weather back home. You may hear many complaints from expats from time to time, but it all means a hill of beans when one thinks of their adopted Filipino culture and the overall enjoyment of living in the Philippines.

The Philippines is not Guam, and it’s definitely not like living in the West….it’s a good life in the Domain of the Golden Dragon.

15 thoughts on “Living in the Domain of the Golden Dragon”