Food, family and good times. One thing I should mention is eating while in the Philippines. When around family it seems eating is never done. I recall how in the mornings, we would enjoy our coffee (Nescafe 3-in-1) with freshly baked pandesal purchased from a rolling store (usually a honking bicycle with a big box on the back.) 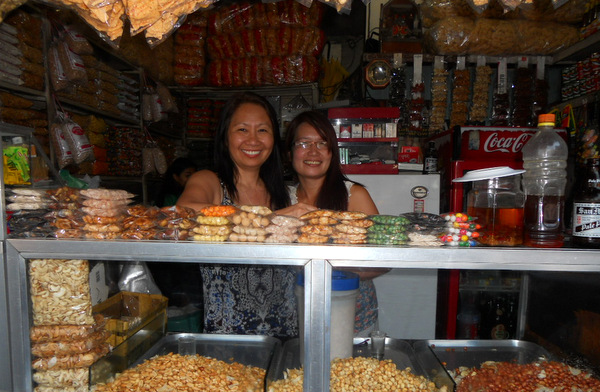 Pandesal, or the “bread of salt’ is probably the most popular bread in the Philippines and is the favorite “agahan” or breakfast food of most Pinoys. Get it before 8am because it goes “out of stock” quickly. Our morning pandesal however, is the family’s way of curbing the appetite until the real breakfast is ready, usually consisting of rice,  "kinilaw" (made from the mornings fresh fish catch), and just about anything else they could conjure up.

No sooner was breakfast over and preparations for lunch were already underway. Lunch, then more snacking, then supper, then pulutan (analogous to the English term “finger food”) with evening drinks. There may be a shortage of many things here in the Philippines, but appetites are not one of them.

Beaches, fiestas, mountain hikes, waterfalls, SM Pale Pisen and all with no rain. Well okay, one measly shower but I don’t think we could have timed our visit any better. Our time in Calbayog City in the province of Samar came to an end faster than a gecko catching a fly. We would have loved to stay put but we did have to get back to reality and our children (our cats.)

We had only 5 days left and we still had to travel with Teri’s sister and nieces back to Mariveles, Bataan to see her hard working left-at-home husband. Bebe and Orly own two stores that specialize in all kinds and varieties of roasted nuts, pork skins, etc. He could not leave the stores for an extended vacation, so I was going to make it up to him when we got there. (See lead photo.)

The wait for our return flight to Manila was not without the usual tearful exchange of hugs, kisses and goodbyes. We assured everyone that we would do everything in our power to return home to Samar as soon as physically possible. Everyone was well briefed on what we must accomplish before we can eventually purchase our one-way tickets home.

We boarded our plane, took off,  and the return to Manila was again uneventful except this time I got to view Mt. Banahaw and Mt. San Cristobal under clear flying conditions. They were not as picturesque as Mayon, but striking and beautiful in their own right. In one hour we were at NAIA, on the ground gathering our luggage from the turnstile.

We proceeded quickly out the doors to the shuttle station that would deliver us to the bus station where the A/C liner to Mariveles awaited.  Up until this point in my trip, I had exercised a great deal of patience in everything Pinoy and I was beginning to think I was actually becoming a new person until "the cutter" showed up.

After standing in and near the front of the shuttle line for about 25 minutes, the shuttle finally arrived. By this time the line had become quite long, and apparently too long for this young punk of a pinoy who decided he was too good to queue up like everyone else and was getting on this shuttle first.

I quickly came out of my quiet little shell, walked up to him and with a firm tap on his shoulder, pointed to the rear and said rather loudly “line” while pointing to the rear. He gave me a cold stare but quickly realized I had garnered the support of everyone in line behind me and retreated to the back of the queue.  My asawa (who would never get involved in so much as a  friendly food fight even if she was starving) just gave me the “look” and shook her head. These days when I get the “look”, I will just smile. 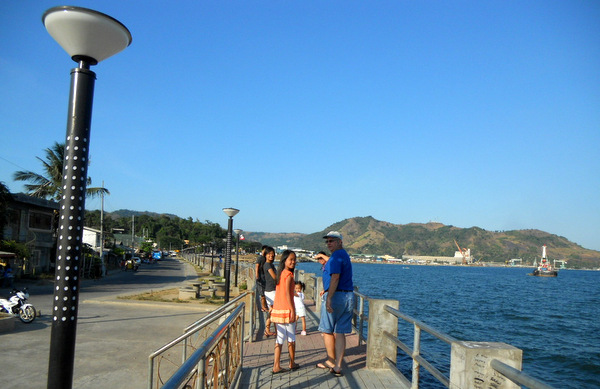 Our four hour aircon bus ride into the southern Bataan Province climaxed with a steep descent down the side of the southern Mariveles Mountain ridge and provided a magnificent view of the Bataan Freeport Zone. Mariveles, a first class municipality, sits at the base of Mt. Marivelles along the coast conjoined with the picturesque natural harbor which makes this city desirably attractive to a wide range of economic activity.

Brother Orly was home awaiting our arrival and almost the minute we arrived the second celebration began. More greets and hugs, food, drink, and all that goes with it. Although our time in Bataan Province was short, we managed to spend a day at a mountain river picnic spot where we ate and stayed refreshed in the clear cool waters descending Mt Mariveles. 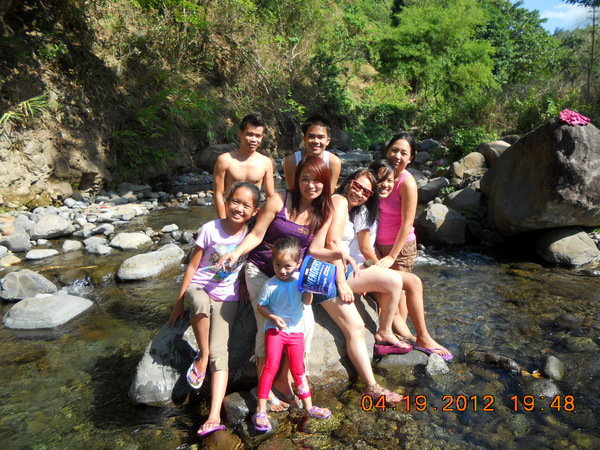 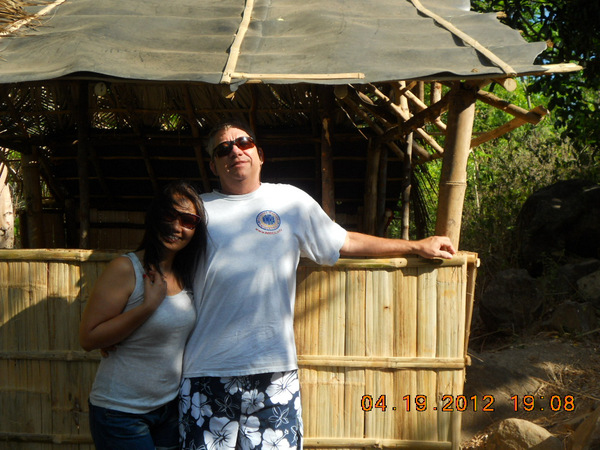 Our last full day before departing for home, we again employed the driver and the van to take us to the Subic Freeport Zone, to visit the place that we once called home. Driving around the Subic and Olongapo areas was quite different than we remembered it as much progress and many new business had changed the landscape.

While my asawa seemed lost, I quickly directed the driver through town and the vaguely familiar streets to our old apartment down by the river. My asawa was amazed and said to everyone in the van, “I’m impressed – he can remember where we lived 25 years ago but he can’t remember to take out the garbage!” Much laughter ensued.

We then drove out to the Barrio to see some old sights, shopped at the new mall on Magsaysay, and then met for lunch at Texas Joe’s at Subic Freeport. We were met for lunch by Paul and Mayang Thompson, long-time residents of the area, and while Paul and I tossed back a few SMB’s and reminisced about Navy days and days gone by, the ladies and kids all went shopping again (have I ever mentioned my asawa’s favorite pastime?)

Upon their return, they enjoyed pony rides, watching skateboarding competition and just hanging out on the beach at the Subic bay front while Paul and I slowly finished off our adult beverage. Once we were all gathered, we said our goodbyes and departed back for Marivelles.

We hope someday to visit Olongapo and visit with the Thompson’s again as we had a rousing good time. I bought Orly a really nice bottle of Merot at the Mall for his bar at home. He even made me sign it before he put it on display along-side all the other famous names on his other bottles like Jack Daniels, Johnny Walker, etc. Needless to say, he was proud and happy. 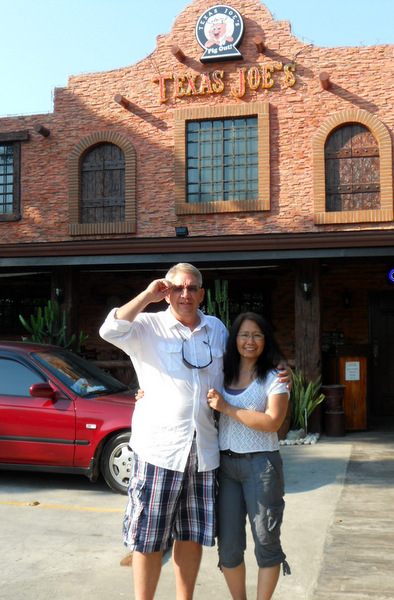 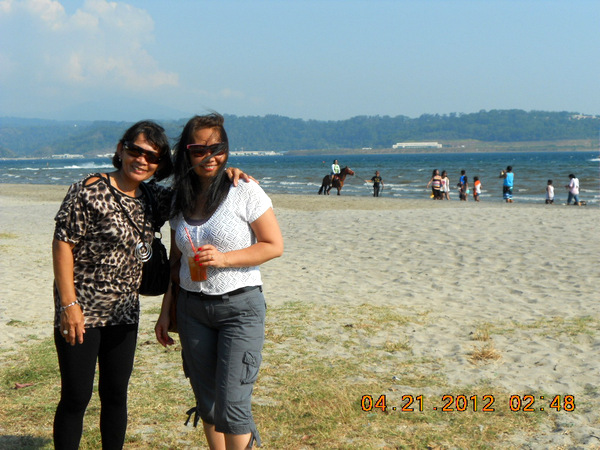 The next day, our driver took us all to the NAIA departure terminal for our long trip home. The midnight departure gave us all full maximum use of our last day there and couldn’t have worked out any better as it gave us plenty of time to share hugs, kisses and goodbyes.

Once we got home, the jet lag (that we never experienced going) hit us both pretty hard and it took a full week to recover. Of course there was probably a little ‘depression’ mixed in, but nonetheless, it was a very long week. The jet lag finally disappeared but the depression looms on, understandably so. Looking back on the trip, I’m not sure which leg of the trip was longer, coming or going, but one thing is for sure. The next trip will only be one way.