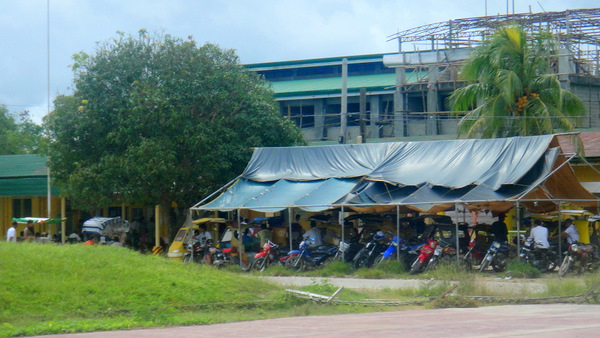 Been writing some posts recently about medical costs in the Philippines.  My asawa and I visited Mercury Drug in Iloilo City last week, and she was able to purchase her medicine  that will shrink a small kidney stone that was revealed in an ultrasound she had done in a healthcare clinic in Guimaras.  We saved over 400 pesos (9.17 US Dollars) from the previous quote from a different pharmacy we had went to. I convinced her to finally use the money that had been set aside for our annual fiesta which was held yesterday since the majority of the funds had already been used to help pay for her uncle's funeral costs. However, after our morning walk yesterday, it looks like my spouse will need a return visit to her general practitioner, Dr. Jacobo. She almost collapsed to the ground after suffering some chest pains.

We had started our exercise routine around 5:10 am. Walked over to the house in Guimaras that Alan and Mike are in the process of renovating. Went back to the paved lot in front of the museum where my asawa likes to jog (I walk) and do some stretching routines on the museum steps. I was circling the lot at a speed which no one would mistake for The Flash, and saw my wife sit down and motion me over to her. She had a pained countenance. I just figured I had  unknowingly done something to irritate her again. It was more than that this time!

I quickly walked over to my spouse. "I'M GOING TO FAINT!" she weakly gasped. "COME ON! LEAN ON ME, I'LL TAKE YOU TO THE HOSPITAL!" I exclaimed. Our local hospital in Guimaras (seen in the above photo) was right next door to the museum. This was no time be concerned about medical costs, I didn't have any money with me. But I knew from a previous panic attack my better half experienced, that the emergency room did not charge us for the visit (only had to pay for medications, a blood test, and other supplies.)

"NO, NO! I CAN'T WALK! I WILL FALL DOWN! JUST LET ME REST!" she pleaded with me. My asawa said she had a pain, or "wind" in her chest that hit her. Her vision had been blurry. I feared a heart attack. I felt her arms. They were cold.  After a couple of minutes, she felt better. I still wanted to take her over to the hospital, but she said she was fine. The staff had wanted to run an ECG (not EKG as we call it in the States) on her previous visit, but she refused it at the time.

Her recent blood test at the healthcare clinic in Guimaras revealed no problems, and the ultrasound revealed a small kidney stone.  But my asawa insisted we just go home, and I advised her that there will be no more walking or jogging for her until we return to her physician in Iloilo for a check-up.

She did complain about some shoulder pain she was experiencing in the morning before we started our walk and took a couple of ibuprofen (brought back to us from Alan during a recent trip to the States.) Or maybe she was experiencing another panic attack? Some of the symptoms she manifested were similar to those of such an attack. Our medical costs have been mounting with the ultrasound, blood test and healthcare clinic visits, and we currently are awaiting reimbursement from my insurance provider in America from the last round of tests. But when your best friend's personal health is at stake, you have to do what's necessary to make sure she's going to be alright.

So a return visit to Dr. Jacobo in Iloilo is a must. I'm keeping a close eye on my aswasa  and have instructed her sister Alida to do the same. Life in paradise. There's always sure to be a few bumps in the road, but I'm praying The Sainted Patient Wife will be fine. She's all the world to me. A faithful, loving Filipina wife. I'm a fortunate man.

5 thoughts on “Back to the Doctor in Iloilo. Medical Costs in the Philippines”