My previous post regarding my “Gangnam Style” backlash against noisy neighbors on New Year’s Eve, had me wondering what kind of trouble my protest might stir up.  This recent incident had the potential to cause some big trouble.  An issue with one of the new  neighbor’s friends and his unleashed dog in our yard ignited the initial irritations.  Say the wrong thing. Do the wrong thing. You might just find a knife stuck in your gut. And least that’s what my asawa always tells me. 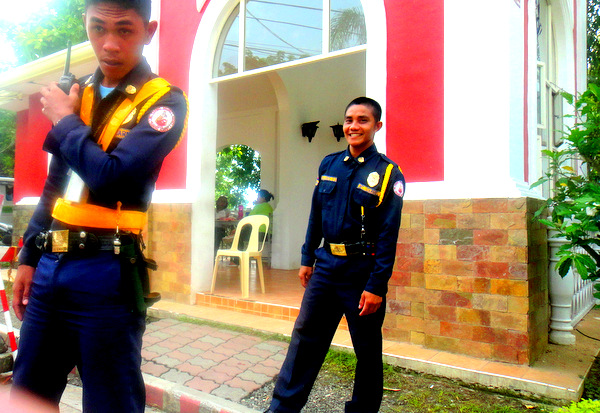 So as I stood in the kitchen on New Year’s Day as my wife sat drinking her morning cup of coffee with niece April hovering around, I saw my neighbor, Harold, out in his yard. Told my spouse I was going out to speak with him about last night’s incident. My niece was concerned. I told her not to worry. I was only going to talk.

I walked over and greeted Harold with a hearty “Happy New Year” and stuck my hand out. He momentarily hesitated but stuck his paw out and shook my hand. I explained to him that I did not call the security guard, Jack, that had pulled up in front of his home on New Year’s Eve. The guard had showed up just minutes after the revelers had cranked up their speakers’  volume to an intolerable, ear-splitting level.

We do not have any “911” number to call in Savannah, our subdivision outside of Iloilo City. No contact information for our local security. The fact that the guard came by might have been due to other neighbors complaining or the noise level itself attracted the attention of our roaming security guards. Or it might have been that they just wanted a drink.

Another party, minus the music, was held at our neighbor’s house this past Friday. My asawa informed me that two of our sentries pulled up on separate motorcycles and joined the group of drinkers that had gathered outside.  That’s what the security guard did on New Year’s Eve after requesting the music be turned down (it was.) I was inside our back bedroom with the air con on watching “Ocean’s Eleven” on HBO. I couldn’t hear any noise from the group.

I don’t know if Harold understood me or not. His girlfriend’s brother suffered a heart attack at the age of 30 not long after we arrived at our new home in Iloilo, and I mentioned to my new neighbor how I had witnessed two guys carrying the poor man’s body out of the house. Harold nodded.  I informed him that I did not want any trouble. He nodded and excused himself.  His van, parked nearby was running with passengers inside and he had to leave.

My asawa is concerned. When the latest party was in progress she informed me that she is worried if I continue to complain. She said as long as they do not turn their music on loud and do not bother us, I should leave it be. I personally do not want my spouse to have another panic attack like she did when we lived in Guimaras after she thought I was kidnapped. Stress can trigger one. The neighbors have built a wooden fence now and sometimes their hound from hell is kept in there and other times it’s not.

I saw the butt-ugly mutt returning to it’s home about 4 am this Saturday morning and tossed a rock at it. It growled and ran away. The demon dog will return, however. And there will be more parties across the street. Our new home will not be built for about 20 months so we won’t be moving anytime soon.

My only glimmer of hope is that my asawa, on information provided by her manicurist, has said the new neighbors are having a new house built in a nearby province. Hopefully, progress on their new residence will go faster than a vote on the RH Bill.  But I’m not counting on it.