An Iloilo City high school teacher recently tried to teach cheat my nephew Sharwen out of money owed to him. Now that Sharwen and his sister, Shaina, our niece, are  enrolled in the public high school system in Guimaras, I’m releasing this post as I feared possible repercussions from the “teacher” involved in this incident.

My nephew needed a mandatory school t-shirt which cost P160, 3.65 US Dollars. My asawa, in charge of all finances for our nephew and niece, who had been living with us, gave Sharwen a P1,000 bill as she did not have any smaller bill.

One would think one of the premier public high schools in Iloilo City would have the resources to give out change for a 1,000 note, about 23 US Dollars. But every day my nephew’s teacher/advisor would always make excuses for not handing over the P840, 19 USD,  in change.

I did not know this situation had been going on almost a week.  Frankly, I’m usually oblivious to most everything around here.  But when our nephew came home one evening, six days after he had given the teacher the 1,000 peso note, my asawa’s loud reaction to another day without the change prompted me to investigate what was going on.

After getting the teacher’s name and number from my nephew, I sent the “educator” a text. She replied that she had already spent the 840 pesos to cover the expenses of t-shirts for other students who did not have any funds. There would be no change.

This “instructor” did not ask permission to take my nephew’s money, she in effect, stole it. Refused to give it back. And  now claimed she used our personal funds for other students.

It’s not the fact that we cannot afford P840, it’s a matter of principle, something which this teacher obviously lacks. I am completely aware that teachers in the Philippines make very low salaries. When my sister-in-law in Guimaras worked as a teacher, before she started her preschool, she was earning approximately 100 US Dollars a month.

I replied with another text informing my nephew’s advisor that I would be in the principal’s office the next morning to get the change for the P1,000 note. I also told her that if there was no change I would be filing a police report.

Faster than a monkey can grab a banana,  I received a reply. “Sir, frankly speaking, I needed the money to buy medicine for my father who had a stroke. Please do not go to the principal’s office and report me.”

Folks, I can smell a scam a mile away.  The “sick relative” routine is a popular ruse in the Philippines with some Filipinos. It ranks right up there with “the check’s in the mail,” and “I’ll respect you in the morning.” Suddenly her story had dramatically changed! I didn’t believe it for a minute.

(I wasn’t the only one not fooled by this teacher’s scam. Our niece Shaina was told by fellow teachers, once they heard of the incident, that their fellow co-worker  was indeed a “liar.”)

“U stole money from my nephew.” is how I began my next message, “U did not ask us. U simply took it and now make excuses. I REPEAT, I WILL be in your principal’s office tomorrow and I WILL get r change.” 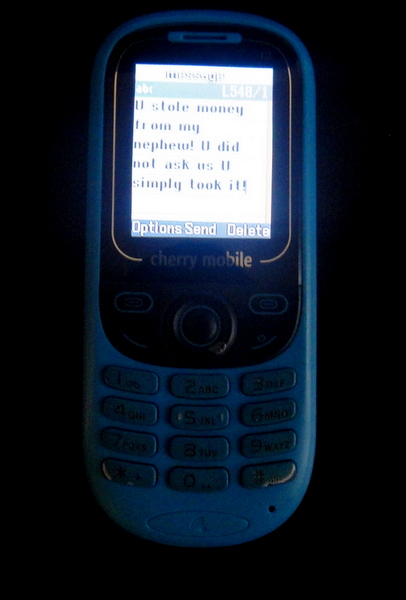 Another swift reply: “OK, sir, I guess my father will go without his medications. Can you wait until Wednesday when I get paid?” (It was now Monday evening.)

“No, I will NOT wait. This is my last text to you. Again, I WILL be at your school tomorrow and I WILL get my change” was my final text.

Five or six more text messages were sent from the instructor that evening. Some in English. Some in  Ilonggo, the local language. I ignored all of them. The next day I was off to school in Iloilo City to pay a visit to the principal.  And I wasn’t happy.