I Carried This House On My Back! (Along with 49 other Guys.) 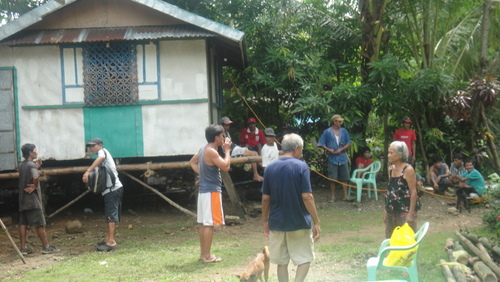 Never know what new adventures await in the Philippines. After a madcap motorcycle ride to Buluangan this past Sunday to watch my father-in-law’s house get moved in an event called the Bayanihan. The term bayanihan refers to a spirit of communal unity or effort to achieve a particular objective which originated with the common Filipino tradition where family and friends volunteer to move a house to a new location. There was a flock of Filipinos  posted around Lolo’s home and clusters of neighbors scattered throughout waiting for the move. This was certainly going to be one of the social events of the year in this small community. 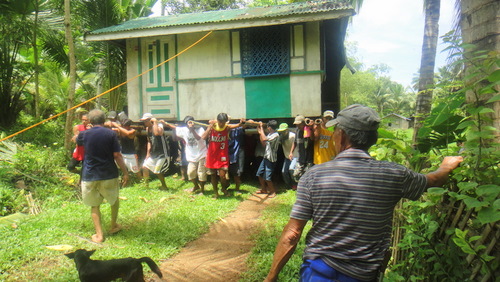 It was never my intention to do some manual labor and actually physically participate in the Bayanihan. I really had no desire to hoist a two-ton structure on my back and move it 200 meters down a muddy, wet, unpaved road. I’m 59 years old. I’m lucky to be able to lift a bottle of San Miguel Pale Pilsen to my lips (OK, OK, to be honest, I really don’t a problem with that.) But after going around Lolo’s house and taking a few pictures of the feast that was being prepared for later, I decided to help. Thought it would be a unique experience. It was. 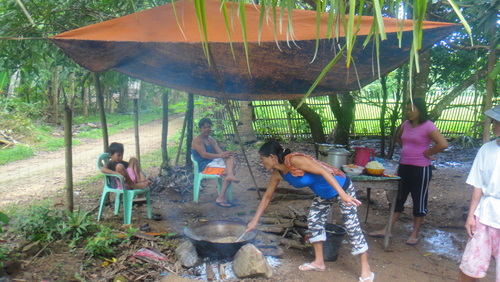 There was a huge kettle of pancit being prepared in the photo above. There were also a few dogs occasionally checking on the progress of the dish. I saw some of the mutts lapping some leftover food from the pan after most everyone had eaten after the Bayanihan move. My asawa brought along some crackers and tubig (water.) She has never eaten at this relative’s house. I think I can understand why now.

Went over to the right side of the house and got underneath a bamboo pole as the move was about to commence. We lifted lolo’s structure and soon let it down a couple of minutes later. Check out the first video below, and you can I’m getting too old for this sort of thing.  That’s me in the following photo, second from the left, and I’m struggling. My brother-in-law Joery is to my right, he’s not even breathing heavy. 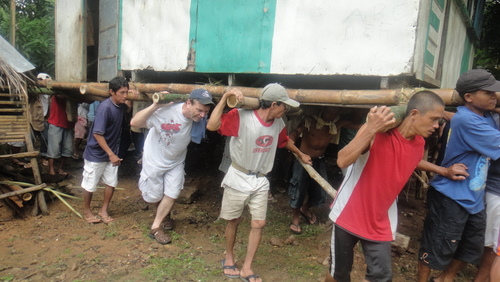 Had to chop down a papaya tree before we could advance. Only took a minute for one of the guys to shimmy up the tree and tie a rope around it. It went down in a furious flurry of bolo chops, and  we were on our way again in a few minutes. 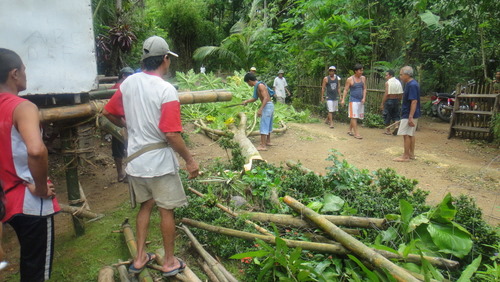 We didn’t get very far until before we got stopped again, butted up against a neighbor’s fence we almost took out. After some maneuvering, we worked ourselves away from the fence. It was suggested by my asawa that I switch positions and move to the rear of the house. Most times I listen to my spouse, so I took her advice and took up the new position. Much easier on me, but I could feel the damage was already done. My back was hurting, but there was no way I was going to give up.

I’ll leave you with two extremely short videos my staff photographer, The Sainted Patient Wife, was able to take before her camera battery went dead and needed recharging. Of course, as CEO of PhilippinesPlus.com, I should have charged the battery the night before, at least that’s what I was told by the real boss of the outfit, my wife. In the second video, you’ll  catch just a glimpse of the move because SPW heads out of the way of the oncoming structure and is trying to avoid the mud and water on the path which I did not dodge. More on the story in the next post along with some more photos. A long walk through the jungle was coming up after the Bayanihan, and I’m still suffering the after effects of the move and the trek through the jungle in the Philippines. I need some more ibuprofen!