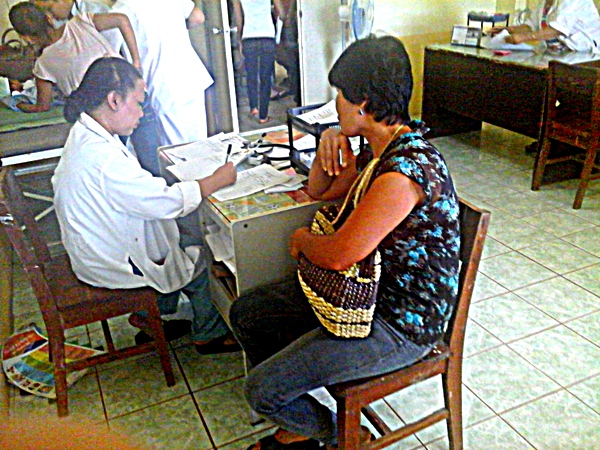 Returned to Iloilo City this past Monday so the results of my asawa’s medical tests, the ultrasound and blood test, could be seen by her physician, Dr. Jacobo. We didn’t schedule an appointment but since we had to pick up results from the healthcare clinic located in the J and B III Building where the general practitioner’s office was located and had some shopping to do, my spouse sent a text message to what she thought was his secretary. Received a reply shortly thereafter from Dr. Jacobo himself stating that we could come by later in the afternoon at 3 pm. The Sainted Patient Wife had mistakenly sent the text to the doctor’s personal cell phone. Little did I know at that time that the medical costs for some prescriptions my asawa needed would be so costly,  and that our wait would be considerably longer than we had anticipated. 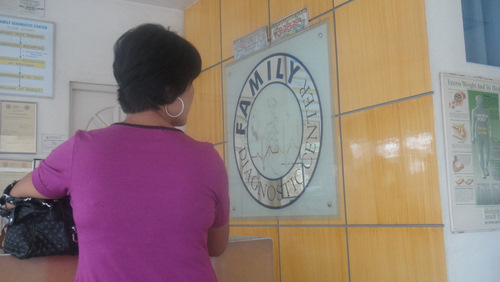 Stopped by the Jollibee at SM Delgado in Iloilo for a Champ Burger breakfast (hold the mayo) for myself and spicy Chickenjoy for my asawa. She was paying, and I was pleased. It was only 10 am so we had a lot of time before our appointment. Didn’t make sense to go back on the pump boat to Guimaras Island and come back later. We wanted to make sure that all of the medical tests were scrutinized by our physician. My asawa had not had any pain in her abdomen recently, which was the reason for our visit to Dr. Jacobo originally. I was concerned because the ultrasound results revealed a small kidney stone. And I wanted to make sure her blood test and cholesterol levels were fine.

Decided to head out to the Robinson Mall (more on that visit in a future post) instead of our usual hang out,  SM City. Had only been there about two years ago, and didn’t stay very long. We didn’t care think they had adequate air con before, but after we entered the shopping center we noticed a good flow of cool air and decided to check out what movies were available at the cinema. I didn’t feel like walking around for the next five hours as I was suffering from a cold and sore throat.

Took a taxi to the doctor’s office around 2:15. The cab reaching the J and B III only two blocks away. We had no idea we were so close and could have easily walked. Went into the healthcare clinic to pick up one of my wife’s medical test results and took the elevator to Suite 204, Dr. Jacobo. His office door was closed, and we sat in the hot hallway for about 15 minutes. An elderly lola arrived, opened the door (which we had not tried to open, thinking the office would not be open until 3 pm) and followed her in. An air con was pumping cool air into the room as the receptionist retrieved some plastic chairs from another room so we could sit in comfort along with the group of patients already waiting. 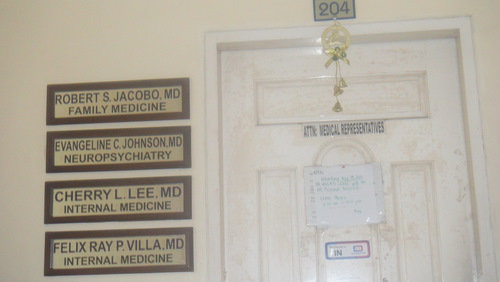 Seems the doctor had been called away on an emergency. One of his patients had suffered a heart attack, and our physician was at a local hospital in Iloilo City trying to stabilize the man. Didn’t get back to his office until around 3:30 and there was a long line of people ahead of us. Got called into his office approximately 5:00. He apologized for the delay, and began looking at my asawa’s blood test results. Everything looked fine. Scanned the ultrasound results and prescribed two different medications to shrink the small kidney stone. Also wrote out a prescription for Fosavance which was to be taken once weekly and would help The Sainted Patient Wife absorb  calcium.

SPW takes a daily dose of Caltrate faithfully, but without the new medication, most of the calcium she was getting from the supplement was being wasted, according to her general practitioner. Had no idea what the medical costs would be but decided to use the pharmacy in the healthcare clinic on the ground floor since we were advised their rates were very reasonable. My asawa asked how much half of the prescription for the two medicines which would shrink the kidney stone would cost. She was quoted the price of 4,800 pesos, almost 113 US Dollars. With our costly huge Fiesta being celebrated at the end of this month, my asawa decided to wait until next month to purchase the medication. It not within our budget to be able to purchase the medication today.

Dr. Jacobo had said that the kidney stone might not even cause a blockage, and the ultrasound doctor at the Guimaras Island Clinic said my wife would be alright if she just drank a lot of water. She called the kidney stone a “crystal.” The pharmacy did not even carry the Fosavance so we stopped at two other drug stores but had no luck in locating any. It was beginning to get dark, and I did not want to stay in Iloilo City overnight. We needed to catch a pump boat back home before the last one left for our rural province. Walked several blocks over to the Mercury Drug Store near Mary Mart Mall where my wife purchased her mother’s high blood pressure tablets, and they had the medication in stock. After handing a 1,000 note (23.65 US Dollars) to the pharmacy clerk she was advised that the cost would be P910 pesos (21.52 USD) for only TWO TABLETS! Talk about your outrageous medical costs!

Well, my wife did not want to ask for her money back. I asked her what good a two week supply of the medicine could possibly do. I’ll just have to submit the cost along with the doctor’s bill of only P350 (8.27 USD) to our health insurer provider back in the States and hope we get reimbursed. I’ve got three claims into the company which compensates us for medical fees we incur in the Philippines, but none have been processed yet. Once that money gets deposited into our bank account, we’ll have the funds we need for the kidney stone medication. I personally feel that this is an expense that has a much greater priority than a fiesta, but the two day celebration is such an important part of the culture in the Philippines, that I cannot convince my asawa to use the money for her prescriptions. According to her, the fiesta comes first.  And after being married for over 11 years to my wonderful, but stubborn, Filipina, I know there is no way I am going to change her mind.