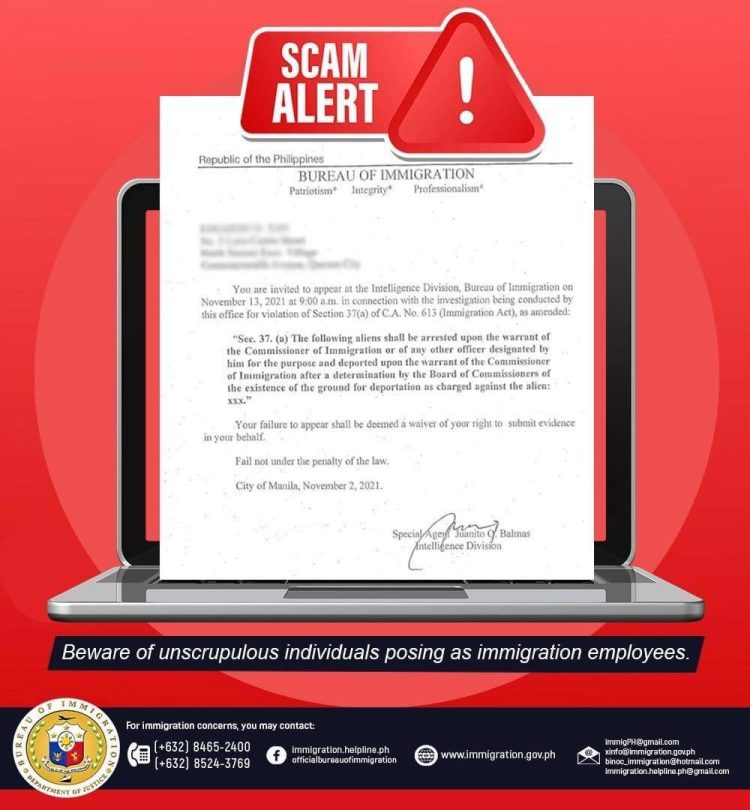 Here’s a November 11, 2021 PRESS RELEASE from the Philippine Bureau of Immigration, BI, that I felt expats living in the PH should be aware of. The BI is warning of fake agents harassing foreign nationals.

Morente stated that BI has received reports that unscrupulous individuals are presenting themselves as BI agents.

The Commissioner reports that a victim sent BI a letter to verify a notice he received via courier. The letter was inviting the foreigner to the BI office in connection with a purported investigation in which he could be charged and deported.

A certain Special Agent Juanito Balmas signed the said letter. Balmas is not an employee of the BI.

“The victim was being asked to appear before the BI on a Saturday,” said Morente.  “We have no office during Saturdays.  We suspect that whoever was trying to harass him will meet him nearby, and possibly extort money from him,” he added.

Morente said that in the past, the BI has warned against numerous scams involving fake employees.

Legal notices are sent to foreign nationals using the BI’s official letterhead. Legitimate employees of the agency sign such letters.

Per the Commissioner, the contact information of all the BI offices nationwide is available at the BI’s website at www.immigration.gov.ph, should the public wish to verify communication sent to them.

For your queries, requests for clarification, and other concerns, you may contact us at:

Other Offices | Bureau of Immigration