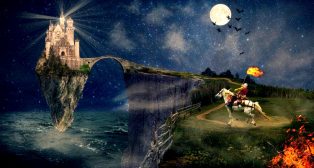 “I asked the DPWH (Department of Public Works and highways) and they said it’s not a priority of the [present] administration because the economic return is not as big as others,” Philippine Senator Cynthia Villar announced last week.

“Iloilo is a progressive province but Guimaras is not. So they prefer other projects with big economic impact.”

By the way, Mark Villar, Senator Villar’s son, is the Secretary of the DPWH.

Here’s the original article which was published on August 23, 2019. Note that the article states that in May 2018 Senator Villar said the bridge could be built by the end of 2022.

I love the smell of fresh carabao crap in the early morning air. Recently, I smelled it again when I saw the following headline from the Daily Guardian: “PALACE OFFICIAL: Iloilo-Guimaras bridge is Duterte’s top priority.” I have a better chance of finding Bigfoot than I do of ever seeing the bridge’s construction actually go beyond the “feasibility” stage. Hence, I’ve named this post “Fairy Tale Iloilo-Guimaras Bridge is Duterte’s Top Priority.”

After the August 3, 2019 Iloilo-Guimaras sea tragedy in which 31 lives were lost, politicians have been jumping on the bridge bandwagon faster than small-town gossip. They’re making privileged speeches wanting the construction of the Panay-Guimaras bridge to actually begin.

Unfortunately, if experience is an indicator, the “lip service” will continue but any actual work on the proposed bridge is nowhere in sight. However, “feasibility” studies, of which someone must be making a buck on, always seem to be two sandwiches short of a picnic.

Cabinet Secretary Karlo Nograles told reporters “We are doing everything how we can speed up the process. But this project needs to comply with several requirements.”

Due to the Secretary’s use of the word “but,” alarm bells went off in my fat, bald kano head. Frankly, I couldn’t understand the need to comply with “several requirements.” I’ll explain in a bit.

History of the Proposed Bridge

Rodolfo P. Gumabong wrote the following in The News Today in a July 2009 article:

“During our masteral school days at the College of Public Ad at U.P. Iloilo in 1972  Dr. Catalino Gallego Nava, a well-known physician-traumatologist, talked about his fervent wish to put up a bridge from Bulobito-on shore to Buenavista shoreline. The plan was to let Japan do the construction and funding will be taken from a World Bank source or any other world funding agency.”

Dr. Nava later became the Governor of Guimaras province, as did his sons, Dr. Rahman Nava and Dr. Felipe Nava.

Dr. Catalino Nava met his premature death on Dec. 3, 1995 while serving as Congressman. His fondest dream of constructing a bridge in his home province has not materialized to this day.

The inter-island bridge project was conceptualized way back during the term of President Fidel V. Ramos in 1997.

As reported by the Inquirer.net in March 2012, a study undertaken by the Japan International Cooperation Agency in 1999 pegged the cost of the project at P53.661 billion with a total span of 23.19 kilometers.

This included P14.173 billion for the construction of the 2.59-km Panay-Guimaras bridge and P39.488 billion for a 20.6-km bridge linking Guimaras and Negros islands.

The Inquirer.net also reported that a DPWH (Department of Public Works and Highways) study in 2010 estimated the project to cost P28.496 billion spanning a total of 13.16 kilometers. This included 3.6 kilometers for the Panay-Guimaras bridge at P9.438 billion and a 9.56-km bridge to connect Guimaras and Negros costing P19.08 billion

In July 2011 then Guimaras Governor Felipe Nava said that the plan was to build a bridge that would connect Iloilo to Guimaras. Governor Nava hoped to complete the dream of his late father, Dr. Catalino Nava.

The proposed target completion date was from 2011 to 2015 for the Iloilo-Guimaras Bridge.

The next stage of the plan sought to build a bridge from Guimaras to Negros. The construction was supposed to start in 2016 and be completed in 2020.

However, a lack of funds delayed the progress of the “dream” bridge. (As reported in the Philippine Daily Inquirer.)

In November 4, 2016, the Sun Star stated the $1-billion bridge connecting the four islands in the Visayas should see completion within the term of President Rodrigo Duterte in 2022.

Department of Public Works Secretary Mark Villar said the Iloilo-Guimaras-Negros-Cebu Link Bridge is the “most ambitious bridge program in the history of our nation.”

National Economic and Development Authority Director General Ernesto Pernia, said the infrastructure projects, including the Iloilo-Guimaras-Negros-Cebu Link Bridge, have gone through the “eye of the needle” and are ready to be implemented by the concerned agencies next year.

HOLD ON! Norgrales said the proposal needs to undergo several requirements such as visibility study and approval by the National Economic Development Authority (NEDA.)

However, in November 2016, the NEDA Director General said the project has gone through the “eye of the needle” and is ready to be implemented by the concerned agencies next year (2017.)

The Philippine News Agency, PNA, reported that Guimaras Governor Samuel Gumarin said that the construction of the 5.7-kilometer Panay-Guimaras bridge may start next year (2019.) Public Works and Highways Secretary Mark Villar said the proposed bridge was “feasible” because of the shallow water between these islands.

The bridge was supposed to be one of the core projects of the Duterte Administration’s “Build, Build, Build” Program.

In addition, in May 2018, the Panay News quotes Mark Villar’s mother, Senator Cynthia Villar, as stating the bridge may be completed before the end of President Rodrigo Duterte’s six-year term in 2022.

Start of construction for the bridge linking the island province of Guimaras to Iloilo, which will be part of the Panay-Guimaras-Negros Bridge network, is targeted by the end of this year or early 2019, according to Guimaras Gov. Samuel T. Gumarin.

The Governor was citing the latest update from Public Works and Highways Secretary Mark A. Villar. The governor said completion period would be seen within four to five years.

“Ever since, it is a dream of Guimaras province because we are suffering whenever there is a storm signal. So we pray that it will be pushed through,” the Governor said.

Sadly, nothing has been “pushed through” and ANOTHER so-called “feasibility” study by the Chinese is now underway. I hope that no more lives will be lost on the dangerous pump boats that ply the Iloilo-Guimaras Strait in the meantime.

CCC Highway Consultants Co., Ltd. of the People’s Republic of China is conducting the afore-mentioned “feasibility” study. This study began in November 2018. The Philippine News Agency, in an August 8, 2019 article, stated that the current feasibility study for the Panay-Guimaras-Negros Island Bridges Project is in the final stage of completion. It’s scheduled for presentation by the end of 2019.

A feasibility study does not commence the construction of any project.

It’s time to stop talking!Build the bridge before more people lose their lives on the pump boats!

The pump boats are gone. All wooden-hulled craft were banned in January 2021. There are not enough vessels plying the Iloilo Strait now. People have to wait in line, sometimes for hours, to catch a ride to Iloilo City or vice versa. Frankly, now that the bridge is suddenly no longer a priority, Guimarasons will continue to suffer. The lies continue.