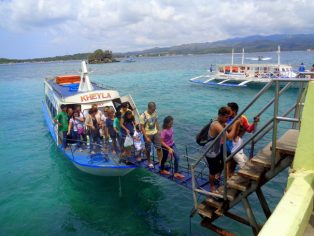 After a six-hour Ceres bus ride from Iloilo City we arrived in Caticlan, the gateway to Boracay, around 1:15 pm last Friday afternoon, February 28, 2020. First of all, a thermometer gun was pointed at all incoming visitors’ heads due to the current COVID-19 hysteria. Furthermore, after passing the “fever check point,” we had to fill out some paperwork, a Declaration Form.

Hence, the “Declaration Form,” only required basic information. Only one form was needed; I didn’t need to fill out one for my Filipina wife. After presenting my United States passport, I completed the form that only asked for my Name, Nationality, Sex, Age, Contact Number, Email address, and Address in the Philippines.

Pay Fees at One Convenient Window

Hanging out at Caticlan in 2017 with our nephew and nieces

In our previous visits to Boracay, we had to go to three separate windows to pay our entrance fees. Now we could pay all of our fees at one window, much more convenient. Here’s a look at the fees and their cost:

There were two windows where we could pay our fees, so we thought. One window had a sign with three employees working at the counter.  The signage indicated all few fees could be paid at their window. Nonetheless, the employees directed us to the next window that merely stated “Terminal Fee.”

I really don’t know what the function of the three employees was aside from standing around and checking their smart phones for their latest Facebook post.

After paying our fees, we made our way through the security checkpoint. While putting our two bags on the conveyor belt screening our items, I was instructed by the female security guard to put my “man purse” on the belt. I usually don’t bring this with me. However, I was carrying my Samsung tablet and our hotel reservations in it.

Our two pieces of luggage went through and then the guard stopped the conveyor belt, therefore forcing me to reach way inside and grab my “man purse.” As I grasped my “purse,” I loudly asked the guard why she had stopped the belt.

There was no reply. In contrast, a female agent at the terminal heard my remark and said something to the female security guard.

Frankly, there wasn’t much signage and direction from the guards and employees in the Caticlan Jetty Port on how to proceed. Furthermore, while there weren’t huge crowds surrounding us as there were on our previous visits, it would have been nice to have some kind of clear directions on how to advance.

I saw the entryway to the boats that would take us to Boracay, about a ten minute boat ride away. However, my wife had to go back to a counter to have our hotel reservations confirmed before we could proceed.

Boarding the Banca Boat to Boracay

Consequently, after having our hotel reservation’s confirmation stamped, we made it to the motorized banca boat. There were plenty of seats available and the rain that had plagued us earlier in the day had stopped.

About ten minutes later, we were on the outskirts of Boracay. A guide on a nearby by mini-bus asked where we were going.

We were then directed to a nearby E-trike, which charged us 150 pesos, three US dollars. The trip to Station Two on the White Beach where our hotel, Jejsellends, was located took around 15 minutes. The beach area wasn’t particularly crowded. We knew from prior visits that we had to walk down a pathway that passed a McDonald’s to reach our destination. The trike drivers are not allowed right on the beach.

The Search for Our Hotel

Our trike driver had left us in a familiar spot. We reached our first location, the aforementioned McDonald’s, without any problem. I knew we had to turn right. A Johnny Rocket’s was my point of reference along with a retail outlet named “Real Coffee.”

Burgers no more at Johnny’s joint

After walking for several minutes, I spied the “Real Coffee” sign but didn’t see the Johnny Rocket’s joint. It was gone. We walked on but knew we had passed one of the narrow pathways that would lead to our hotel. It was now around 1:45 pm, still plenty of time to make our 2:00 check-in.

A middle-aged Filipino with a “Guide” tag asked if we needed help. We did. He wasn’t too familiar with our hotel, but managed to ask around and after about 10 minutes we found our hotel. We checked in and gave the man a 100-peso tip. The guide also booked island-hopping trips. We were too tired to go on any island hopping tours that afternoon, but informed the man we would check with him the next day.

Next Up: Our Boracay Island Hopping Tour & Hot Stones Massage