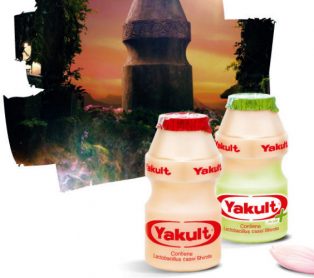 On January 23, 2020, the Department of Health (DOH) announced that dengue cases in the Philippines continue to decline. Only one region exceeded the alert threshold while another passed the epidemic threshold.

In the past three months, a steady decline in dengue cases was recorded in all regions of the Philippines. For December 22-31, 2019, there were only 815 dengue cases. That was 87% lower compared to the 6,125 cases reported over the same period in 2018.

Meanwhile, we’re now able to buy Yakult in our regular outlets in Guimaras without any problem. S&R in nearby Iloilo City, where we do the bulk of our shopping, always has plenty of Yakult on hand. At one time, there was a sign limiting the amount of Yakult packages one could purchase to five per customer.

During my treatment at the Emergency Room at Medicus Medical Center in Iloilo City for a gall bladder attack, I was advised to take some probiotic supplements.

However, the ER doctor said that Yakult did not contain enough probiotics to help me. Recommended by the physician were yogurt and a probiotic supplement in tablet form.

I was shopping with my asawa the other day. We stopped by the Hypermarket in San Miguel, Jordan, Guimaras. Because we would be in Iloilo City the following day, we were only purchasing some basics we could obtain on our island province.

First of all on my list was Yakult. It’s a probiotic drink invented in 1930 by Dr. Minoru Shirota, a Japanese microbiologist.

Probiotics are live bacteria and yeasts that are good for you, especially your digestive system.  I never heard of Yakult until we moved to the Philippines over 10 years ago.

Since my wife suffered a severe gastritis attack last year, we’ve been purchasing Yakult on a regular basis. However, before I headed over to the section that sells this healthy drink, my spouse informed me that the market was out of stock the week before.

I soon discovered that Yakult was sold out again.

I wondered if the drink was in a different section. I’m an inquisitive American expat in the Philippines. Therefore, I asked one of the store clerks if they had any more Yakult in stock.

The employee checked with a co-worker. No more Yakult. Out of stock.

“Out of stock.” A common phrase I’ve heard in the Philippines since my retirement in “paradise.”

“Yes, sir,” replied the clerk, tickled that I had spoken a phrase in the local language.

Because we would be shopping at S&R in Iloilo City the next day, I wasn’t too concerned. We could just pick up some tomorrow. S&R always had Yakult in stock.

My partner and I arrived in Iloilo City the next day. After a stop at the Festive Walk Mall and SM City, we ended our shopping trip at S&R. After stocking up on a box of White Castle Cheeseburgers and Jimmy Dean Sausage, Egg, and Cheese Biscuits, I headed towards the dairy counter.

Suddenly, I noticed a commotion in the dairy section! A group of people was absconding with all of the Yakult!

Hurriedly, I “raced” over. The shoppers already had two carts full of Yakult. I reached in front of the store clerk shoving the Yakult in the carts and snagged three cartons of Yakult. Only a few packages remained.

Finally, I returned to my wife. While informing her of what had just transpired, I knew I had to return to the scene of the Yakult hijacking.

I approached the group of ladies with the load of Yakult. Politely, I inquired as to why they needed so much Yakult, explaining we couldn’t purchase any in Guimaras the day before.

While fully realizing it was none of my business, a young Filipina in the group still explained they needed it because of dengue. Dengue fever has exceeded epidemic status in Iloilo and our own province of Guimaras. Yakult is used to help treat dengue fever.

The young lady also informed me that their children drink Yakult instead of soft drinks. My wife later surmised that perhaps the group operated a private school or a canteen for a school. I agreed that could be a possibility. However, I didn’t press the group for any details. I had bothered them enough. I thanked the ladies for their time and moved on.

Yakult is said to help regenerate blood platelets. A low platelet and white blood cell count is common with dengue fever. My own asawa experienced as such during a dengue fever attack she suffered years ago.

Four or Five Bottles a Day

Numerous articles flood the World Wide Web regarding the usage of Yakult in the treatment of dengue. Some doctors recommend drinking four to five bottles a day of Yakult to aid in dengue recovery.

If you can’t find Yakult, papaya leaves boiled in water are also a good dengue fever treatment. It’s possibly the best home remedy treatment for dengue fever according to ndtv.com.

Yakult Shortage & Dengue Fever? Unfortunately, it’s a reality in our province and nearby Iloilo.