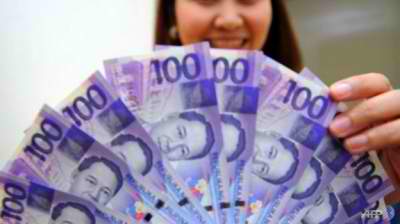 Therefore, I discovered that this original post touted a London-based firm, Capital Economics, which predicted the Philippine Peso would drop to 58 by the end of 2019.

Barring any coup d‘état’s, the peso looks to close around 50.41 to 1 by the end of 2019. Political instability never has a good effect on any country’s economy. The PHP currently stands at 50.62.

Hence, I’m looking at some Philippine Peso predictions for the upcoming year, 2020, and beyond.

The Wallet.Investor has a slightly different take.  Here’s a look at their Forex USD/PHP predictions:

Only time will tell who is correct.

Why Was Philippine Peso’s 2019 Performance Better?

Why did the Philippine peso strengthen to over 3.6 % this year? Bloomberg.com points out the Philippine central bank cut interest rates three times in 2019. While this usually weakens demand for a nation’s currency, it helped slow down the Philippines’ skyrocketing inflation rate.

The country’s annual inflation rate dropped to 0.9% in September 2019 from 6.7% a year earlier. The slowing inflation rate has pushed up the real yield on the nation’s 10-year bonds, thus drawing in more foreign investors. The Philippines, according to Bloomberg, offers the highest real yield in Asian emerging markets.

Traditionally, the peso also extends gains due to higher remittances sent home by Overseas Filipino Workers, OFWs, in the last four months of the year. December has been the peak month for remittances in each of the past 10 years.

HERE’S THE ORIGINAL ARTICLE FROM NOV. 2018

The Manila Times is reporting a forecast from London-based Capital Economics, CA. The UK research institution is retaining an earlier prognostication that the currency could fall to as low as P58 against the dollar in 2019.

The reason for the projection? The Philippines’ widening current account deficit.

The research group noted that it made sense for a relatively undeveloped economy like the Philippines to import capital from abroad. As a result, this is driving current account deficits in the Philippines.

However, it also said that the “sudden shift in the current account from surplus to a small deficit has made the country more vulnerable to sudden shifts in global sentiment, and has been a key reason behind the sharp fall in the peso this year.”

A deficit of $3.087 billion in the first half of 2018 is a major component of the balance of payments. This deficit is equivalent to 1.9 percent of gross domestic product (GDP).

The Philippine peso is Asia’s worst-performing currency for 2018.

While the Philippine peso has recently fallen to near 13-year lows in the P54:$1 level, the current strengthening of the peso is not expected to last.

Exports are expected remain weak on the back of slowing global demand. Imports will likely remain strong given demand for capital goods to support the government’s infrastructure spending program.

“This is likely to put further downward pressure on the currency, and one of the key reasons why we expect the peso to weaken from 52.7 pesos to the dollar currently to 58.0 by end-2019,” it said.

The trade deficit widened by 70.5 percent to $29.910 billion in January-to-September from $17.543 billion a year ago based on latest available data.

The government is banking on its P9-trillion ambitious “Build Build Build” infrastructure program to boost economic growth. However, economic managers recently revised to a lower 6.5-6.9 percent this year from the previous 7.0-8.0 percent. GDP growth has remained below target at 6.3 percent as of the end of September.