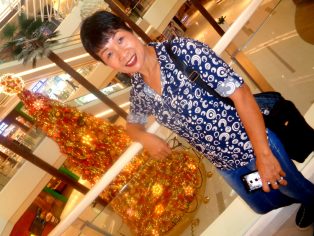 First of all, we’ve had our Christmas tree up since the last week of October. Furthermore, our tree was on “Filipino Time” this year. The tree was on display the first week of October last year. Therefore, a recent entertainment news piece regarding Fixer Upper star Joanna Gaines, however, piqued my interest. Media outlets were making a big deal about her putting up her Christmas tree two weeks before Thanksgiving.

Frankly, it’s no big deal in the Philippines. The Philippines has the longest Christmas season in the world. It begins in September, the first of the “ber” months, September, October, November, December.

The SM City Malls in Iloilo and throughout the Philippines begin playing their Christmas music in September. Cashiers and sales start donning their Santa Claus caps.

Hence, you might understand why I believe the Joanna Gaines story is no big deal. Decorating your Christmas tree two weeks before Thanksgiving isn’t newsworthy. However, Joanna stirred up a snowstorm on social media when she posted pictures of her Christmas tree. Here’s a look at our tree:

All the major malls in nearby Iloilo City already have their Christmas trees on display.

Joanna’s Christmas spirit is to be admired. However, she lags far behind the Philippines when it comes to celebrating the Christmas season.