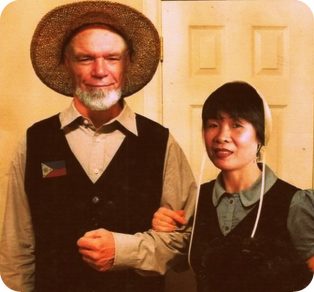 “American Expat’s Simple Life in Philippines” was the original title for this post. While I contemplated that rather boring headline, I substituted the following title “Life in Philippines: Hallucinogenic Mushrooms & Sex Surveys.” Every website expert will tell you to have interesting, informative, or provocative titles for your posts. It’s a good way to get more visitors to your website.

Furthermore, this goes to the Johnny Cash theory from his song “Bad News.” “Well bad news travels like wildfire, good news travels slow” is the second line from that Cash classic.

Consequently, more people are inclined to read a news story that involves drugs and sex than some joker from Illinois living a simple life in the Philippines. That’s human nature.

However, good news does win out occasionally. Take the case of Kayne West speaking recently at Evangelist Joel Osteen’s Lakewood Church. West is now a born-again Christian. He openly speaks about serving his Lord Jesus Christ. I consider that good news. An atheist undoubtedly would file this in the “bad news” category.

However, let’s return to my original premise for this post “Life in Philippines: Hallucinogenic Mushrooms & Sex Surveys.”

The Philippines Department of Health is concerned. They’ve issued a warning about high school youth in the Philippines scouring the countryside for hallucinogenic mushrooms, specifically psylocibin mushrooms.

Furthermore, I’m not making this up. Some kids are reportedly looking for a shabu (meth) substitute that won’t get them arrested and put into the slammer. Unlike, marijuana, which has a dangerous drug classification in the Philippines, no mushroom is on the dangerous drug list.

Education Secretary Leonor Briones has warned authorities. “I know three high school students who were hospitalized and brought to the ICU (intensive care unit) because they ingested these wild mushrooms they got from somewhere,” said Briones.

While the use of psychedelic mushrooms like peyote has been used by different cultures for thousands of years in religious ceremonies and rituals, the Filipino kids are probably just looking for a cheap “high.” Perhaps it’s better than inhaling the contact cement “Rugby” and getting ;your kicks that way.

In contrast, this American expat in the Philippines has never smoked a joint or a cigarette of any kind. I’ve never taken any dangerous drugs. While I’ve certainly consumed a bottle of Red Horse (or two) during my past ten years in the Philippines, we don’t have any kind of alcohol in our home.

Furthermore, I haven’t consumed any adult beverages in almost a month. Last time we visited Olivia’s Kitchen in Guimaras, I only ordered a Pepsi. We don’t go out that often anymore and I usually drink a liter of two of water a day to combat any further kidney stone attacks.

Let’s deal with the sex surveys now. Just Google “phil care sex survey” after you read this post and check out the following headlines:

Survey Reveals That Many Sexually Active Filipinos Don’t Use Condoms.

Illonggos have best sex life in the Philippines.

No word regarding the PhilCare study as to what effect hallucinogenic mushrooms might have on one’s sex life, however.

The “simple” life. Nothing wrong with it. My loving Filipina wife of almost 20 years and our eight canines provide me with all the love, affection, and amusement I need.

Lead photo of Mr. and Mrs. Amish courtesy of Line of Sight Communications