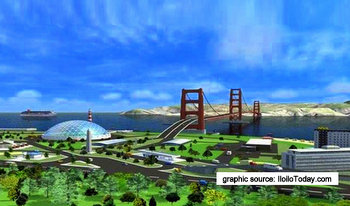 It’s a line I’ve heard several times before. Consequently, it’s right up there with “The check’s in the mail” and “I’ll still respect you in the morning.” Iloilo-Guimaras Bridge Construction Starts 2021? Well, that’s the new target date for bridge construction to begin.

Department of Public Works and Highways, DPWH, Secretary Mark Villar recently appeared before the Senate. Villar now claims that the Iloilo-Guimaras-Negros Island bridge construction might begin the second quarter of 2021.

The Secretary states that the Iloilo-Guimaras phase will be completed sometime in 2023.

First of all, in 2016, Villar claimed the project would be completed within President Duterte’s term. Duterte’s term ends in 2022.

At that time Villar said the Iloilo-Guimaras-Negros-Cebu Link Bridge was the “most ambitious bridge program in the history of our nation.”

However, now there’s a glimmer of hope. Maybe this “Fairy Tale Bridge” will actually become a reality.

“This is already the fourth year of the Duterte administration. It was committed on the first year. We already lost 31 lives to a tragedy. I hope we do not wait for another 31 lives to be lost again before we start the construction of this very important bridge,” Drilon told DPWH officials at a Senate Finance Committee hearing.

Hence, Villar now states that the DPWH feasibility study for Iloilo-Guimaras-Negros Island bridges is due in October. There’s been numerous so-called “feasibility” studies going on since 1999.

“What is important is the feasibility study is completed. Once it is completed, we can proceed with the detailed engineering,” Public Works Secretary Mark Villar told the Senate Committee.

Drilon Wants to Know Why the Delay?

Drilon questioned the DPWH for the delay in the construction of the inter-island bridge that will connect three major islands in Western Visayas.

Villar said the Proposed Iloilo-Guimaras-Negros Island Bridges Project remains to be part of the priority economic bridges by the Duterte administration despite the delay. There was no explanation for the delay..

The recent Iloilo-Guimaras sea tragedy that killed 31 people bolstered an outcry for the construction of the bridge.

After which, the Department of Finance will consider the funding.

Drilon asked the DPWH for the timetable, urging the agency for the project’s speedy implementation.

Again, the construction will start about the second quarter of 2021. The construction of the Iloilo-Guimaras link will take up to two years, sometime in 2023. Phase 2 that will link Guimaras to Negros will be completed by 2024, the DPWH committed to Drilon and the committee.

The Ilonggo senator earlier called on the national government to already proceed with the Iloilo-Guimaras-Negros Island bridges, saying that the safety of the people should outweigh its economic cost.

With reporting from the Senate of the Philippines Press Release.