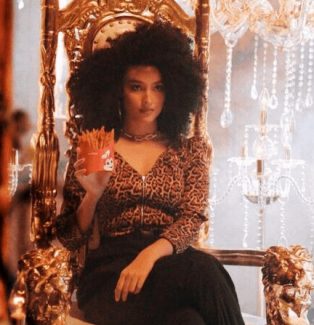 Hence, Soberano was hired to portray all the Spice Girls in the new Spicy Fries commercial. Get it? Spicy Fries. Spice Girls. A trained monkey get could get that reference.

However, I doubt that a trained monkey would have been so culturally insensitive. Nevertheless, Jollibee and Soberano screwed up and made what is basically a racist commercial for french fries.

Didn’t anyone at Jollibee’s know what blackface is? It’s makeup used on a performer to make them appear darker when they’re playing the role of a black person. It’s an offensive practice. It was traditionally used by white performers who portrayed caricatures of African slaves in minstrel shows in the United States.

Evidently, Liza Soberano was also clueless. She defended her look when netizens challenged her use of blackface. Soberano made the following statement: “This is not any form of blackface. It’s a costume just like how any other person would dress up if they were portraying a famous character. In this case, it’s Mel B.”

After getting schooled by social media critics, Soberano eventually apologized on Twitter:

“Before everything gets out of hand I would like to apologize for those affected by my comments about the whole ‘black face’ issue. It wasn’t of my intention to mock anyone of any culture or ethnicity.”

“I understand that this is a sensitive topic and that I should’ve kept my mouth shut,” she continued, saying that she will try to learn more about such matters to keep herself from making “careless mistakes” again in the future.

Better to keep your mouth shut and seem a fool than to open it and remove all doubt.

UPDATE: THE RACIST AD HAS BEEN TAKEN DOWN

With reporting from rappler.com

(Fear not, O Faithful Reader, “Philippines Plus” is not a politically-correct sanctuary. We oppose such terms as “informal settlers” for “squatters” and “fisherfolk” for “fishermen.” However, some times we’re even offended by the evident ignorance of some individuals and organizations that should know better.)