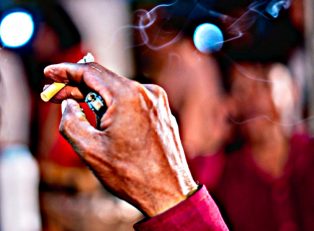 Maybe I have too much time on my hands. I read online news stories from the Philippines throughout the day. While my sexy pool boy duties have resumed again, I still find myself with lots of spare time. Consequently I have time to post stories like this: “Are Chinese Tourists Uglier than Americans?”

Are Chinese Tourists Uglier than Americans?

First of all, a recent story in the Daily Guardian caught my attention. Hence, the newspaper’s headline, “Smoking Chinese nabbed for flicking cigarette butt on auxiliary cop’s face” was certainly worth investigating.

I had just posted my own “Ugly American” story, “Hey, Pink Shirt! Put on your Life Jacket!” Maybe there’s a chance that Chinese tourists are even ruder than US citizens?

It was Sunday, September 8, 2019. Boracay Island in Malay, Aklan province. A Chinese national, Denis Chong, 50, was smoking a cigarette.

Noly Cuatriz, 27, is an auxiliary police officer in Malay. The smoking Chinese was reprimanded by the cop. Chong was in violation of Malay’s anti-smoking ordinance.

He flicked his cigarette butt.

It landed on the cop’s face.

Other members of the Malay Auxiliary Police immediately arrested the Chinese national. Chong was charged for direct assault upon an agent of a person in authority. However, he was released after posting bail.

Furthermore, Chong is a businessman who reportedly owns a travel agency in Boracay. Chinese nationals top the list of local ordinance violators in Boracay. From January to April 2019, Chinese nationals allegedly committed 739 infractions. Tailing them are Korean nationals, locals (Filipinos), Russians, and Taiwanese. Finally, that’s according to a report from the Boracay Tourism Regulatory Enforcement Unit.

Consequently, I was pleased as a turd in a toilet bowl that no Americans made it to the top of the “naughty” list. As a result, I did a little research to see how many Americans have been visiting the white sandy beaches of Boracay. If there’s not as many Americans visiting the White Beach of Boracay, odds, are, there are less of them to break the law.

My research, courtesy of the Sunstar Iloilo, revealed that 250, 326 Chinese tourist came to Boracay from January to June 2019. South Korea came in at second with 197,488 tourists. The Koreans formerly held the top tourist spot for years.

Here’s the remainder of the tourist figures:

Therefore its not hard to understand why Filipinos are in the list of top violators. However, perhaps there might be a case for suggesting that Russian tourists could be as rude as the Chinese. The number of Russian visitors to Boracay was 7,074 as compared to the Chinese arrivals, 250, 326.

That said, the Russians still finished high on the list of tourists who committed violations on Boracay. Furthermore, American travelers to Boracay were double the amount of Russian tourists, but the American’s didn’t make the “mischievous” list.

Is it possible that we Americans are becoming more civilized?

Hope springs eternal in the bosom of this American expat in the Philippines.