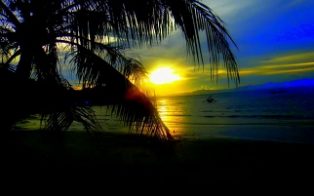 First of all, if you’re planning to visit any of the sandy white beaches in Guimaras, don’t. “Guimaras’ Massive Travel & Tourism Problems,” today’s post, explains why.

Because I’ve lived in Guimaras, an island province in Western Visayas, for the better part of ten years, I have a firsthand view of what’s going on here. Moreover, I’m not here to promote the Philippines or Guimaras. I’m not the Tourism Department.

I’ve never sugar-coated anything since moving to the Philippines in 2009 with my lovely Filipina wife. If something’s good, I’ll write about it. I’ll inform my readers of any bad news, also. I’ve done it for the past ten years and will continue to do so.

Tragically, on Saturday afternoon, August 3, 2019, 31 people lost their lives. They were passengers on three ill-fated pump boats on the Iloilo Strait that capsized during a sudden squall.

The jump off point for tourists in Guimaras is nearby Iloilo City. Before the tragedy, you could expect to wait five or ten minutes (or less) to purchase a ticket to ride one of the 104 pump boats that used to ply the Guimaras to Iloilo route, and vice versa.

The trips would take about 15 minutes from Jordan Wharf in Guimaras. During normal days, Guimaras Tourism Director Liberty Ferrer said one motorized banca can cater to an average of 20 trips daily.

In contrast, you now could wait anywhere from five to ten hours to purchase a boat ticket at Guimaras’ Jordan Wharf if the weather is inclement. The Coast Guard will not allow the dangerous pump boats to operate. Fast craft and RORO, roll-on, roll-off ferries are the only alternatives for travel.

Therefore, accommodations are down in Guimaras. There’s less people traveling to visit Guimaras’ many tourism sites. While business might pick up after the rainy season ends in November, right now I wouldn’t recommend traveling to Guimaras.

Our Trips to Iloilo Curtailed

Our trips to nearby Iloilo City will be strictly limited. I closely monitor the weather reports. In addition, we now cut our trips to the city short and leave early in the afternoon.

In retrospect, I would think that some businesses in Iloilo City would also suffer as they, too, must be losing customers from Guimaras that normally would come over.

Are there really any short-term solutions to Guimaras’ massive travel & tourism problems? The pump boats are at the mercy of Mother Nature. Therefore, why would any fast craft or RORO company add additional vessels when they don’t know on a daily basis how many passengers would be traveling on their vessels?

Will the End of the Rainy Season Change Anything?

Again, the end of the rainy season may bring some relief. However, since tarpaulins on the pump boats have to be removed or rolled up, some passengers will continue to complain about the heat. The tarpaulins acted as a roof for protection from the sun, but the tarps may have contributed to the capsizing of the boats on August 3.

The wooden-hulled banca boats were first ordered to modernize back in 2016. They’re to be replaced with steel-hulled craft or fiberglass boats. However, nothing was done. Frankly, don’t count on anything happening on that front anytime soon.

The proposed “fairy tale” Iloilo to Guimaras bridge may never become a reality. In light of the Iloilo Strait tragedy, politicians have been pontificating and making “privileged” speeches. Local political boards have passed resolutions urging the government to start work on the bridge. There’s plenty of talk. However, there’s been little action.

Almost four years ago, I lost a good friend, Larry. He died, along with eight other people one Sunday afternoon. He was the Captain of the “Tawash.” The ill-fated craft also fell victim to a sudden storm. The boat capsized.

For two weeks, the wearing of life jackets was made mandatory. The tarpaulins were not rolled up or taken down at the time. There was no pump boat suspension. After two weeks, after Guimaras lawyers complained of getting rumpled shirts and suits from wearing their life jackets, the life jackets weren’t demanded anymore from the Coast Guard or boat operators.

I suspect that after awhile, things will go back to “normal” in Guimaras. The pump boats will be allowed to operate with little or no restrictions and the wearing of life jackets will not be made mandatory. Pump boats will not be modernized. One shovelful of dirt won’t be turned to start construction of the long sought after bridge from Iloilo to Guimaras.