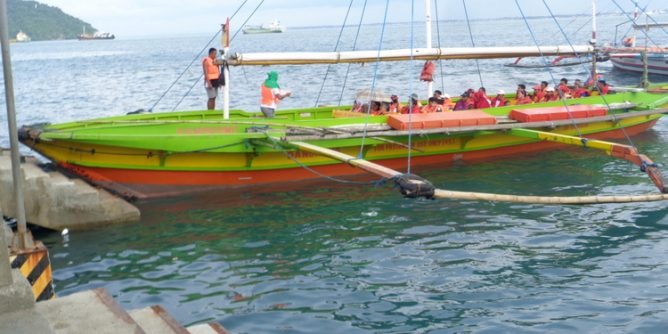 Our British friend, Paul Toplis, and his charming asawa, Janeth, had to endure a 5 ½ hour wait to reach their home recently. Guimaras’ power couple were in Iloilo City. However, due to inclement weather, the “fast craft” journey to Guimaras, normally a 10-15 minute trek, delayed them for hours. Furthermore, my asawa and I planned to go with our niece April to Iloilo this past Tuesday. Our niece had to catch a flight to Manila at 3:45 pm with Air Asia.

Torrential rains from Tropical Storm Liwayway had been pounding us since 3 am. The weather forecast called for a possible clearing after nine am. Cloudy skies and hazy sunshine by the afternoon was predicted. I hoped the AccuWeather prognosis was correct.

Furthermore, there was no way the pump boats would be operating during the heavy downpour. The “fast craft” and RORO, roll-on, roll-off ferry, were our only options. However, with the daily commute of almost 15,000 passengers going from Guimaras to Iloilo, the lines at both ticket office venues would be extremely long.

My asawa and April started getting ready. Our niece was packed and ready to go. We left our house around 8:00. A light sprinkle of rain splattered across the windshield of our XLT Ford Ranger. I was concerned the pump boats would still not be allowed to operate. The August 3, 2019 sea tragedy on the Iloilo Strait had claimed 31 lives. The Coast Guard had imposed restrictions on when and how the boats could operate.

I rode shotgun. I always do. My Filipina wife obtained her license back at the States at the age of 40. She is more patient then me. However, it was good to see her expressing her displeasure at some of the moronic tricycle drivers who don’t use the slower right lane.

These slow-moving operators refuse to get out of the passing lane.

Frankly, Guimaras has way too many trike drivers. Most of the time you’ll see them driving around with an empty trike buring up 50 pesos of gas to look for a 10 peso fare.

We reached the intersection which goes right to the Jordan Wharf, where the pump boats dock; left takes you to the fast craft and RORO dock.

“Where should we go?” my wife asked.

“Let’s take our chances and see if the pump boats are operating,” I responded.

Fortunately, the boats were operating. The ticket office was distributing tickets but the individual crew members on each vessel would be collecting the fares. This helped move along the long lines at the ticket window.

The rain had stopped and the hazy sunshine that the AccuWeather had predicted had already arrived. We arrived at Parola Wharf in Iloilo City without incident.

A porter carried our niece’s luggage to a nearby taxi. We planned to have the cab drop off our niece at the SM City’s Traveller’s Lounge.

However, we would make a stop at Robinson’s first so my wife could get her hair cut at David’s Salon. We gave April enough money for the taxi to go to SM City. We would meet her later.

Unfortunately, after my asawa’s hair cut and an early quick lunch at McDonald’s, we found ourselves making our way to the nearest emergency room!