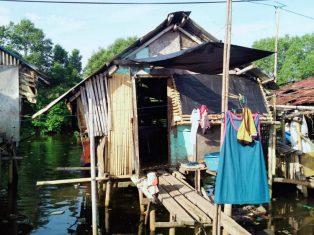 An “aswang” is a shape-shifting demon, or witch, that spends its days in female form. However, at nighttime, the creature scours the countryside looking for babies to snatch and devour.

Furthermore, my own spouse and her family survived an aswang attack years ago. The aswang was targeting my wife’s sister Emily, who was a beautiful “sharp-nosed” baby at the time.

Sadly, the body of the parent’s baby was discovered Saturday morning. The child was floating in a portion of a creek under a neighbor’s house. Only ten meters from the couples house. About 33 feet.

However, a Philippine National Police, PNP, spokesperson deemed the case closed. The police determined that the baby girl drowned to death. Police tossed aside the “aswang” theory.

Their investigation indicated that the baby might have crawled out of their house, which sits in the creek, and fell into the water.

However, the parents believed that an aswang snatched the baby. This is what they determined after consulting a “lady quack doctor.” [Editor’s Note: “Lady quack doctor” is the term used by the Daily Guardian that reported this story. I use the term “healer” in this post.]

The healer advised the couple that one of their neighbors might be a “witch” that preys on babies. No word on whether the “aswang” neighbor has been uncovered or not.