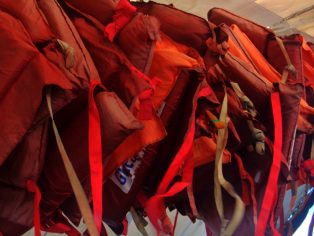 The Maritime Industry Authority (MARINA) has grounded all the motorboats plying the Iloilo Strait indefinitely.

In October 2015, nine people lost their lives when the Tawash capsized. On board was my friend, Larry, a crewmember. Larry left behind a wife and five daughters.

For two weeks, the Coast Guard poked around making sure all passengers were using life jackets. However, after two weeks, the wearing of life jackets was no longer required. In four years since the Tawash tragedy, my wife and I have made hundreds of trips between Guimaras and Iloilo City.

In those four years, not one single pump boat crew member has instructed the passengers to don their life jackets.

Phasing Out of Old Pump Boats

Furthermore, Commodore Allan Dela Vega, PCG-Western Visayas district commander said it’s time to review the design of the pump boats. Hence, the Coast Guard Commodore said if they’re proven to be vulnerable to the elements, the boats must be phased out.

“In land, we are phasing out old jeepneys. Meanwhile, sea vessels here in Iloilo-Guimaras are still traditional, wooden boats with outriggers. What is it about the design that makes these boats very vulnerable when there are squalls?” Dela Vega said.

Likewise, MARINA, the Maritime Industry Authority, issued a memorandum in 2016 for the phasing out of all wooden-hulled passenger sea vessels. A MARINA engineer wondered why Guimaras has not begun any such modernization in the last three years.

I wonder why, also.

However, the banca boat suspension has left sea travelers with long waits this week. My sister-in-law in Guimaras waited four hours to board an Ocean Jet fast craft on Friday, August 9. That’s unacceptable.

The Status Quo is not Good Enough

Frankly, the status quo is not good enough. It’s tragic that it has taken 31 lives lost to talk of any possible change regarding passenger safety.

I’ve met Governor Gumarin a couple of times. Nice man. Friendly. Approachable. I have no doubt that he’s concerned with the passenger safety of travelers from Guimaras to Iloilo and vice versa. I’m hopeful he can make some positive changes and resolve this safety issue.