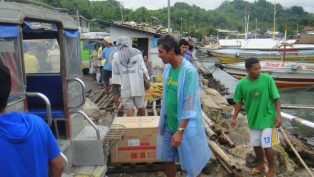 Sadly, it took at least 31 people to lose their lives before overdue changes for passenger sea travel between Iloilo and Guimaras may be underway. The Maritime Industry Authority (MARINA) has grounded all the motorboats plying the Iloilo Strait indefinitely.

In lieu of the motorboats, according to MARINA, people traveling to Iloilo City from Guimaras and vice versa would be served by two Roll-on Roll-off (Ro-Ro) barges of Tristar and Montenegro shipping companies.

It allowed the Ro-Ro vessels to increase the frequency of their trips.

In addition, MARINA has stated that two fast craft companies, Ocean Fast Ferries and the 2Go Group, will be plying the Iloilo-Gumaras route.

Commodore Allan Dela Vega, PCG-Western Visayas district commander, said it is time to review the design of the pump boats. Hence, if they’re proven to be vulnerable to the elements, the boats must be phased out.

“In land, we are phasing out old jeepneys. Meanwhile, sea vessels here in Iloilo-Guimaras are still traditional, wooden boats with outriggers. What is it about the design that makes these boats very vulnerable when there are squalls?” Dela Vega said.

Some of the survivors claimed that the tarpaulin cover of the pump boat was a factor in the capsizing of the boats as the sudden wind gusts lifted up the boat before crashing it onto the water.

Some casualties were also trapped in the upturned hull and tarpaulin cover.  Tragically, this is what happened to 11 passengers of the Jenny Vince.

An investigation is underway as to why the Coast Guard allowed the Jenny Vince, bound for Buenavista, Guimaras, to make their trip. Three hours earlier, the Keziah 2 and Chi-Chi had already capsized around noon.

There were no divers from the Coast Guard to go under the capsized vessels to bring out the victims.

They were ensnared in the hull of the vessels. Little air was available.

Porters from the Buenavista wharf jumped into action. Armed with axes, they boarded other pump boats to help the victims of the Jenny Vince.  However, the hulls of these pump boats are made of tough wood. The axes could do little to rip open the hulls and give the trapped passengers much needed air.

The Philippine Coast Guard was woefully unprepared. (With reporting from The Daily Guardian)

ADVISORY from the U.K.

“On 3 August 2019, three ferry boats capsized in the Iloilo-Guimaras straits, with at least 30 lives lost. Avoid travel on ferries and passenger boats if possible, particularly in the rainy season (June-December),” according to the travel advisory released on Aug. 5, said.

In its updated travel advisory, the UK Foreign and Commonwealth Office (FCO) noted that passenger boats “are often overloaded, may lack necessary lifesaving equipment or be inadequately maintained and have incomplete passenger manifests. Storms can develop quickly and maritime rescue services in the Philippines may be limited.”

Guimaras Vice Governor John Edward Gando said that the latest advisory might affect the tourism industry and image of the province.

But as to what extent, Gando said it will be determined after evaluation.

Gando said they could not determine the number of British citizens residing and visiting the island province.

In general, Gando said the incident will have a negative impact on the province since it involves the safety of sea travel to the island.

We will be severely limiting our trips to Iloilo City now and plan to travel by the new fast craft services.

(With reporting from the Daily Guardian)