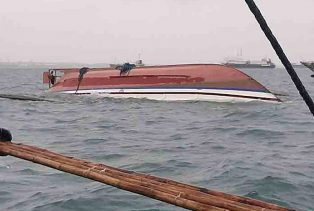 At least 31 people lost their lives Saturday, August 3, 2019. Three banca boats capsized. The latest casualty figures come from the Inquirer.net. The three motorboats capsized after being buffeted by strong winds and big waves off Iloilo and Guimaras provinces on Saturday, bringing the death toll to 31, the Philippine Coast Guard said.

De la Vega said that as of 3 p.m. on Sunday, 62 passengers and crew had been rescued, while three others remained missing.

Fishermen carry the body of a passenger, one of at least 31 who died after their motorboats capsized in the waters between Iloilo City and Guimaras Island during stormy weather on Saturday afternoon

According to the philstar.com,  two passenger pump boats – MB Chi-Chi and MB Keziah 2 – collided and capsized on the way to Jordan Wharf in Guimaras from Iloilo City.

“There was zero visibility when the incident happened. They might have collided after strong winds struck their vessels,” Mercurio said.

For some asinine reason, the Coast Guard, three hours later, allowed the MB Jenny Vince to operate! The Buena Vista boats are smaller than the vessels that run from Iloilo to Jordan, Guimaras.

“Why they authorized the motorboats to sail when in fact there’s a sea mishap that happened in Jordan?”

Sadly, this tragic event brought back some sad memories of another similar incident back in October 2015.

That’s when I lost my friend Larry, skipper on the Tawash. Sadly, nine people lost their lives when the MV Tawash capsized during a sudden storm one Sunday afternoon.  The tragic event also occurred on the Iloilo Strait between Iloilo City and Guimaras.

However, I don’t think much will change. Maybe lawyers from Guimaras will complain again about life jackets causing crumpled suits.

After the Tawash tragedy, life jackets were required on all banca boats for about two weeks. In the past four years, we’ve made hundreds of trips from Guimaras to Iloilo and vice versa.

Not ONCE has any crew members required any passengers to wear a life jacket.

Regional Tourism Director Helen Catalbas had this to say after the Tawash tragedy “sea tragedies happen anywhere in the world.”

What a sympathetic reaction, huh?

Oh, some politician make give some “lip service” and demand some changes, but sadly, I think it will be back to the status quo again very soon.

Moreover, that, my friends, is a tragedy in itself.

Our thoughts and prayers go to the families of those who lost their lives in this recent tragedy.

Furthermore, we will be severely limiting our trips to Iloilo City in the future. We now plan to use the RORO Ferry which is much safer than the banca boats. We will not transfer our Ford Ranger on the RORO, we will simply board as passengers. Our brother-in-law and niece used the RORO from Guimaras on Sunday for no charge.