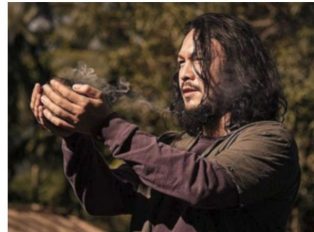 Because I’ve been watching “Ang Probinsyano” for over three years now, I’m always curious when a new guest star appears. Consequently, I’ll check out the star’s story on the World Wide Web. Baron Geisler showed up in late April. At one time, Geisler was rumored to be dead. However, now the 37-year-old is “Ang Probinsyano’s” Born-Again Bad Boy. (Photo from Baron Geisler’s Instagram Page)

Drugs, sex, rock and roll. Yeah, Baron Geisler’s done that and then some.  The ex-brawler and self-confessed former alcoholic now claims to be a devout Christian. He now shares the Word of God instead of getting into fistfights.

According to Wikipedia, Geisler was born to Gracia Bayonito of Bicol, Philippines and Donald David Geisler Jr., a German American who was stationed at the former U.S. military base in Angeles City.

Geisler entered show business as a child actor in 1994. He appeared on the hit kiddie/teen gag show, Ang TV. In 1995 he officially became a part of ABS-CBN’s roster.

His future at ABS-CBN was bright.

However, at age 13, Geisler started hanging out with the “wrong crowd.” Baron starting drinking heavily. His list of wrongdoings and scandals grew longer: brawls, sexual harassment, and assault. His drunken and aggressive “wild child” image was in the public eyes. Baron Geisler was the Philippine showbiz’s official “Bad Boy” poster child.

In March 2018 Geisler was arrested for threatening to kill his brother-in-law Michael Robin Stone with a knife. While sitting in jail, he had a vision from God.

God told Baron that he really was a bad person. God also sent Baron this warning: “You better repent if you want to live. If you don’t stop this, either you go to hell or go to a mental institution.”

A rehab center was Geisler’s next stop. After six months, Baron was officially clean and sober. He opened a barber shop in Cebu hoping for a return into show business. Coco Martin, instrumental in giving other down-on-their luck actors a second chance, hired him for the hit show, “Ang Probinsyano.”

On Instagram, Geisler said he was grateful for the opportunity to be part of the top-rating show.

“Answered prayer. Thank You, Lord! Big thanks,” he said.

The actor plays the role of Dante, the newest enemy of lead character Cardo Dalisay (Coco Martin.) Baron portrays an extremely wicked character on the show, no doubt tapping into his past inner demons. Martin gave Baron this advice: ‘Bro, I will help you, but help yourself too… just get along…just be professional.”

God Bless you, Baron. Most of us need a second chance sometime. I’m praying you’ll make the most of yours.

With reporting from Rappler.com and PhilStar.com.