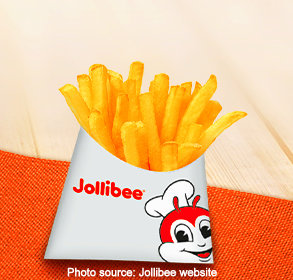 Burned by a recent French fry review, the big fat red bee is smarting. “Jollibee Stung by Horrific French Fries Review” has got the bee and his Filipino fans buzzing. That’s what Yahoo News is reporting on a story first published on Coconuts.

“[T]he fries on my visit weren’t really up to snuff,” writer Lucas Kwan Peterson wrote. “They had a vaguely sweet, almost pastry-like overtone that didn’t jibe with their being otherwise fairly flat and tepid.”

Peterson tried French fries from 19 different fast-food chains in the United State. Furthermore, he judged them according to their taste and texture.

Jollibee ranked 14 spots lower than McDonald’s, which came in at number two.

And the winner is

First place? The top spot went to burger chain Five Guys. Peterson described their fries as a “generous heap of hot, properly salted, natural-cut spuds, with a good balance between crispy fries and the odd one that’s pleasingly soft.”

More controversial than Jollibee’s ranking, though, is that the article placed cult favorite and California icon In-N-Out at the very bottom.

Because I’m an American, I certainly may be biased towards McDonald’s. While I’ve eaten at Jollibee’s numerous times in the past ten years, their French fries don’t compare to McDonald’s.

Sorry, Bee, I’m with the food critic on this one.

OK, while I’ve already got the fat red bee on the ropes, I also don’t care for the Jollibee’s Champ Burger.

Furthermore, I don’t know who is conducting their polls, but Jollibee’s commercials proclaiming they have the best-tasting chicken, Chickenjoy, is way off the mark.

KFC’s and Max’s chicken offerings beat Chickenjoy any day of the week, in my personal opinion.

Take that and stick it up your stinger, Bee!