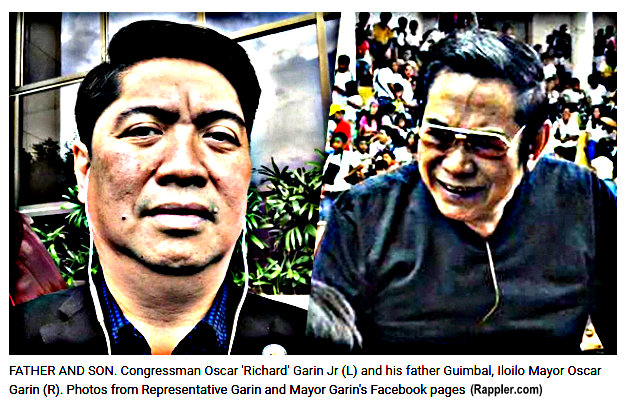 The past Health Secretary is herself facing murder charges over the Dengvaxia dengue vaccine she helped implement. Hence, at least 62 deaths have resulted from the controversial Dengvaxia vaccine’s  enactment.

The Manila Standard reports that 28 Guimbal constables have requested reassignment. Their appeal follows the beating of PO3 Federico Macaya by Mayor Garin Sr. and his son, the Congressman.

The alleged mauling occurred around 3:20 am on Wednesday December 26th  at the Guimbal town plaza.

What’s surprising to the Crusty Old Expat is that none of the many “goon squads” employed by some Filipino politicians didn’t carry out the thrashing instead of the mayor and his son.

Police said the father and son reportedly took Macaya to the Guimbal Public Plaza in Iloilo, disarmed and handcuffed him.

Then the Mayor Garin held Macaya at gunpoint while his congressman son slapped, kicked and spat at him.

John Bulalacao is the Chief Supt. Director of the Western Visayas Regional Police. He has ordered the relief of Police Senior Inspector Antonio Monreal, chief of the Guimbal municipal police station.

Monreal was present during the incident but did not attempt to arrest the Garins.

Bulalacao said he has ordered the recall of the Garins’ police escort, and requested the cancellation of Mayor Garin’s deputation over the PNP.

“I told Cong. Garin that I’m taking this incident as an affront to me. I will not let this pass without taking action against them,” he added.

Earlier, Rep. Garin was supposed to run for Iloilo governor but later withdrew his candidacy.

Incident that Sparked the Attack

Director Bulalacao said the incident stemmed from Macaya’s failure to arrest the suspect in an altercation involving the congressman and two others.

Macaya said he could not arrest the suspect because the victim refused to file charges because he didn’t want his parents, who are OFWs, to know about the incident.

According to a report in the IMT News, the Garins were reportedly mad at Macaya for the non-filing of charges against one of the two protagonists in a town plaza rumble on December 22, 2018 involving Virgil Gegato and Noel Gicana.

Gegato, son of a town councilor, reportedly hit Gicana with an empty bottle during the melee.

Macaya insisted “he did not interfere” when Gegato and Gicana “agreed” to settle the feud. Gegato allegedly paid Gicana P1,500, 30 US Dollars for his hospital bills.

The Iloilo Metropolitan Times, IMT, also states that it was not the first time that Rep. Garin allegedly mauled a cop.

Several years back when he was the mayor of Guimbal, he also kicked and manhandled a police officer. Why? Garin was pissed because the cop failed to immediately respond to a police call. The officer refused to file charges against then mayor Garin.

Son Apologizes but Charges are Filed

In a previous statement, the younger Garin apologized to the PNP, promising that he will take full responsibility for his actions.

“I sincerely ask for your forgiveness of what I did. I reiterate my apologies for my actions, which I take full responsibility,” the congressman said.

Still, Bulalacao said that they would file charges of physical injuries, alarm, and scandal, direct assault against an agent of person in authority, and grave coercion against the two Garins. 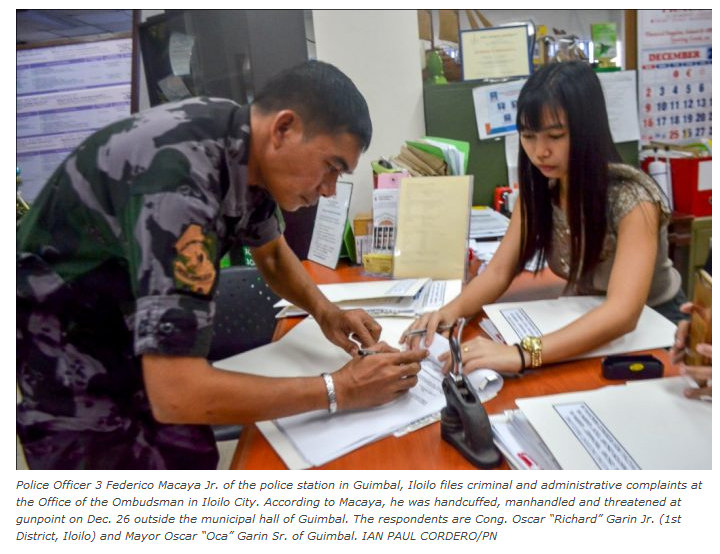 The Panay News reports that the following charges will be filed:

Article 148 of the Revised Penal Code penalizes anyone charged with direct assault against a person in authority or any of his agents with prision correccional in its medium and maximum periods and a fine of not less than P1,000.

Prision correccional suspends an official from public office for six months to six years and prohibits him from practicing a profession or calling.

Consequently, according to The Panay News, PNP National Director General Oscar Albayalde of the Philippine National Police (PNP) cancelled all gun permits and licenses of the two Garins. 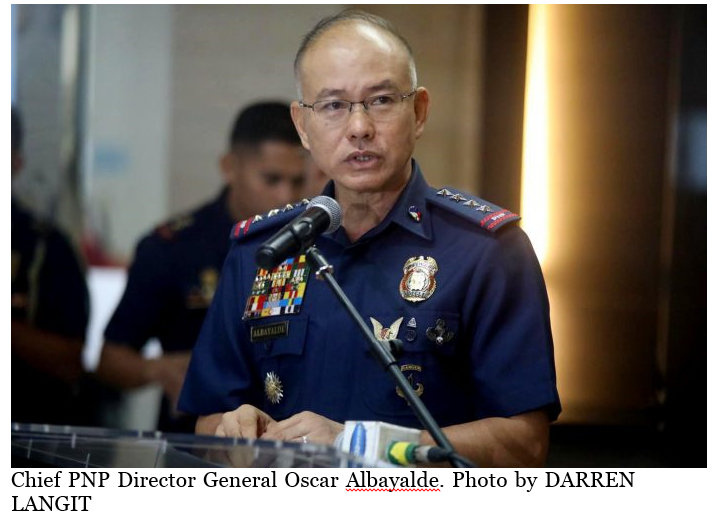 Photo from The Panay News

The cancellation of the Garins’ Permits to Carry Firearms Outside of Residence (PTCFOR) and License to Own and Possess Firearms (LTOPF) has already been issued.

“This is an administrative action in relation to a criminal case involving the use of firearms,” said Albayalde.

Therefore, under Republic Act (RA) 10591 (Comprehensive Firearms and Ammunition Regulation Act), the PNP is the regulatory agency for firearms ownership and possession.

The Garins would be duly notified of the administrative sanction and will be directed to immediately surrender all their registered firearms to the PNP.

Owning and carrying firearms is a privilege pursuant to RA 10591, stressed Albayalde.

Under Section 39 of the Implementing Rules and Regulations of RA 10591, the Chief PNP or his authorized representative may revoke, cancel or suspend a firearms license or permit on the grounds of commission of a crime or offense involving firearms.

Above all, the revocation of the Garins’ permits has effectively made the Garin father and son ineligible to own and possess guns, said Albayalde.