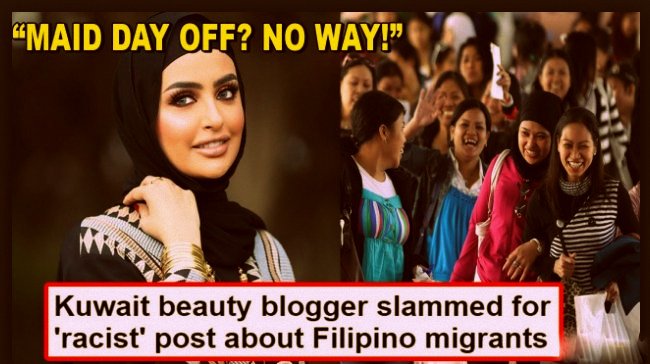 The Manila Standard recently ran a story regarding a Kuwaiti beauty blogger promoting Filipino slavery. Sondo al-Qattan proclaims she will not hire a Filipino domestic helper as they are now entitled to four days off a month. In full disclosure I have a sister-in-law who has been employed as a household assistant in Kuwait for over seven years now. I take this so-called social media star’s racist remarks quite personally.

Despite a severe backlash on the World Wide Web, the Kuwaiti blogger remains unapologetic.

Sondo al-Qattan faces criticism for a video posted on July 10 to Instagram, where she has 2.3-million followers. The belligerent blogger attacked measures introduced in May that grant Filipinas working in Kuwait one day off per week. Kuwaiti employers are also now prevented from keeping their helper’s passports.

Qattan, known for her Internet make-up tutorials, has insisted that the policy of no days off and holding of passports are not an “insult to the employee and do not concern humanity or human rights because I did not deprive the employee of her salary or beat her.”

The racist blogger goes onto to state the following:

“The servant lives in the house just like the owners, he eats the same food, sleeps, rests and goes out shopping… this is a natural right. He’s not like a waiter who works fixed hours, so we give him a weekly leave.”

Migrante International, an advocacy outfit for Filipinos working overseas, called on Qattan to apologize and released the following statement:

“By projecting herself as a slave-owner, Sondos exhibits intoxication in her overinflated ego and false sense of superiority.

At a time when many all over the world are going to and fro online to acquire knowledge and access more information, Sondos should have known by now that workers have rights too and they deserve just and humane treatment from their employers.”

On May 11, 2018, Kuwait and Manila signed an agreement regulating domestic labor, following a diplomatic crisis that led to a ban on Filipino workers going to work in the Gulf country.

In February, Philippine imposed a partial ban on workers traveling to Kuwait after a Filipina maid was murdered and her body found in a freezer.

Arabian Business.com reports that in the face of the public uproar and social media calls to boycott products that have relationships with Qattan, a number of brands have announced that they are cutting ties with her.

“We’ve decided to remove the video sponsored by Sondos on our channels,” Chelsea Boutique, a UK-based cosmetics brand, said on Twitter.

“We believe that decent working conditions should be provided to everyone and such behavior does not represent our brand’s core beliefs.”

Similarly, Phyto, a US-based manufacturer of plant-based hair care formulas, said in a statement on Twitter that it had instructed its partners in Kuwait to end their relationship with Qattan.

“Obviously, we categorically condemn these remarks because they go against the human values defended by our group, its history and its founder,” the statement noted.

“This person speaks on her own behalf and we do not in any way want to endorse her remarks by allowing her name and image to be linked with our brands,” the statement added. “Consequently, we asked our distributor in Kuwait to end his relationship with Ms. Sondos Al Qattan if she does not withdraw her remarks.”

Other brands that have cut ties with Qattan include Max Factor Arabia and French perfume brand M. Micalle.

Slave Conditions for My Spouse in Taiwan

The slave mentality displayed by Sondo al-Qattan was also reflected in the working conditions my own spouse experienced in Taiwan.

My asawa worked as a domestic helper and caretaker for two years in Taipei, Taiwan, before we met and got married. During that entire two year term, my future wife was not allowed ONE DAY OFF. If she complained about this violation of her contract, she knew another Filipina would take her place. My wife’s family was dependent on her overseas remittances.

Hopefully, any remaining sponsors of this so-called Kuwaiti “beauty blogger” will drop her. Such a shameful and discriminatory attitude should be loudly and fervently condemned.