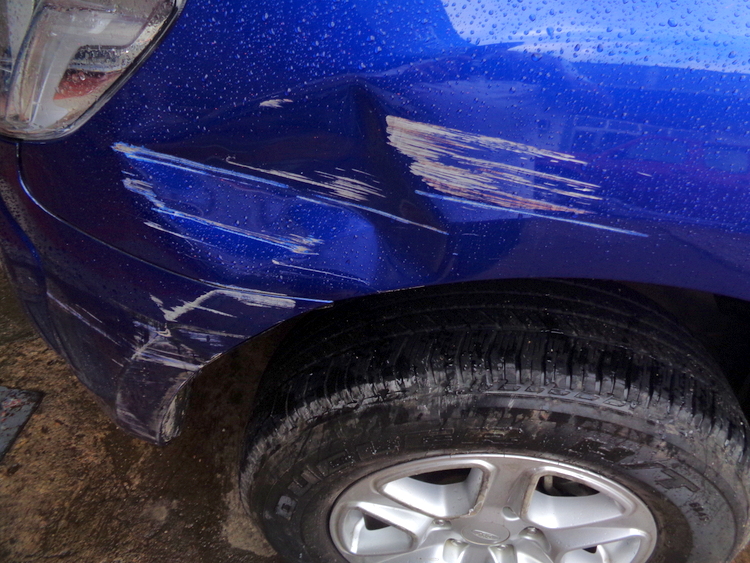 It was around 6:30 pm on a Tuesday. My wife had taken our Aurora blue Ford Ranger to nearby San Miguel, Jordan in Guimaras. Guimaras is the island province in the Philippines we moved to nine years ago. I was parked on our couch watching television when our 20-year-old niece Shaina walked in with her phone: “Tita Daday wants to talk to you, Uncle Dave.” (“Tita (Auntie) Daday” is my wife’s nickname. In the Philippines, if you don’t have a nickname, you might not be 100% Filipino.)

“Dear, I’m at the Jordan Police Station,” my asawa informed me in a very calm tone.

“A truck hit me! I was making a left turn to the New Site and he tried to pass me on the left! He hit me!” my better half exclaimed.

Thankfully my wife was not injured. My asawa had tried to drive it to the local police station but the truck was swerving all over the road.  She left it on the side of the main road. The Philippine National Police who were at the accident site, gave my beleaguered wife a ride to the police station to file a report.

The truck driver was also at the police facility.

Help from a Good Neighbor

I was extremely unsettled over the whole course of events. My wife was only going to get a manicure and pedicure that afternoon. However, she decided to stop by the local New Site Market to pick up some bananas for her Father who lives with us.

My domestic partner did not want me to come over to the police station. It was already nighttime and a hard driving rain was coming down. However, I walked over to a good neighbor, a foreigner who only lived 15 minutes from us.

After shouting from his gate, he eventually heard me and immediately drove me over to the PNP location.

My expat friend patiently waited for me as I walked inside the police station.

My wife had already established with the police that she had her left turn signal on at least 15-16 feet before making her turn. The driver had been following her close behind at a high rate of speed.

My spouse has had her driver’s license in the States and the Philippines for a total of over 13 years. She ALWAYS wears her seat belt and ALWAYS uses her turn signal.

In over six years of driving in Central Illinois, my better half never had any accidents or traffic violations. However, as Scott H so eloquently expressed it, a “Combat Driving” style is the norm for the Philippines.

After a lengthy discussion at the police station the truck driver agreed to submit a claim to his insurance company and even gave my wife a sketch of the Iloilo City repair shop where we could get an estimate for the damages.

We only have the minimum liability insurance on our Ford Ranger as required by the Land Transportation Office, LTO. At this point our vehicle couldn’t be driven for any distance as we couldn’t have a mechanic look at it until the following morning. Though the mechanic at our local Petron station was able to get our vehicle up and running, the exterior damages of the Ranger still had to be addressed.

The exterior damages did not seem extensive