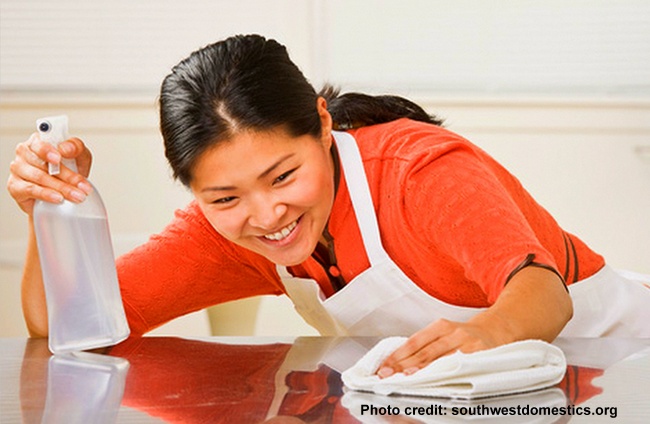 Run naked through the streets and shout it from the housetops! “New Philippines Domestic Helper Hired!” OK, you might want to skip that running naked part. Nevertheless, dear readers, The Crusty Old Expat is as happy as a turd in a toilet bowl. Moreover, my friends, that is about as a happy as a turd can get, though I haven’t spoken to any turds recently. “Poop-heads?” Well, that’s a different story.

However, enough poop talk, let’s get down to the real nitty-gritty. As mentioned in a previous post, my asawa and I needed a domestic helper.

Our previous household service worker, a niece from Manila, had gone back home about two months ago. Unfortunately, one potential household assistant came down with dengue fever before she could even begin working for us.

However, “Niece of Dog Food Lady” decided to stay at home and take care of her two kids.

Two strikes. One more and we’re “out.”

We were considered hiring a worker that was already employed by one of my wife’s thousands of relatives on our island province of Guimaras. The woman informed my wife that my spouse’s relative never gave her a regular day off.

The new potential lead, “Ruby,” might be persuaded to leave and work for us, my asawa reasoned. My wife sent a text message to her sister, Alida, to make “Ruby” an offer.

“Ruby” always came by the house to drop off her employer’s young son to the preschool Alida operated.

The next morning, as I was taking a nap, an incoming call on my wife’s phone woke me up. It was “The Dog Food Lady.” She had a woman that was interested in our domestic helper job. “Dog Food” would call when the lady was on the way to our house. I profusely thanked “Dog Food Lady,” “DFL,” and scurried out to our dirty kitchen to let my wife know.

Less than 30 minutes later “DFL” called. The new potential helper was on her way. My asawa was to meet her at a nearby tricycle wait station.

My better half arrived home about 15 minutes later in our Ford Ranger truck. Following her were two young women on a motorcycle.

The new potential hire sat in our “Karaoke Korner” couch, accompanied by her sister-in-law. They talked for a few minutes as I hung out in my “Man Cave,” the Official Headquarters of this website, “Philippines Plus.”

I eventually made my way to the karaoke section of our living room and my wife informed me that our visitor wanted the job. However, the woman had to “settle things” with her present employer.

“How long will that take?” I inquired. “I’m an American and I need to know.”

“It won’t take long” or “in a while” in the Philippines could mean our potential new employee might not be able to start working for us any time soon. Nevertheless, I get it. Any employer deserves notice. Herein lies the rub: the woman informed my wife that once she was able to work, she would send a text message. However, my wife didn’t obtain the woman’s mobile number.

Two days passed. No word yet from the prospective employee. Late Sunday afternoon, our niece Michelle who was visiting us that day informed me that “Ruby,” the woman we were going to offer a job to, had a friend that could start work for us the next day, today, Monday.

My sister-in-law had not told Ruby about the job offer. We were waiting to get word from “Dog Food Lady’s” friend. I sent a message to “DFL” informing her that we had a new helper who would start work the next day since we had not heard from her friend.

You snooze. You lose. I didn’t put that in the text but did thank “Dog Food Lady” for her help.

However, did our new household assistant show up today?

Yes, she did! It only took us almost two months but Praise the Lord, we have our new domestic helper in the Philippines!