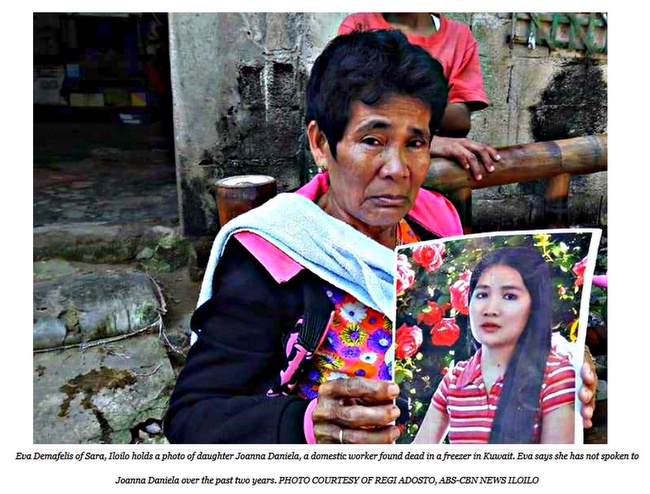 The Crusty Old Expat was saddened to hear of the torture and death of a Filipina, a domestic helper in Kuwait, who was from Sara, Iloilo. Sitting upright in a freezer, with arms crossed was the lifeless body of Joanna Daniela Demafelis, 29. Her body bore torture marks and signs of strangulation. For more than a year, the ill-fated Pinay’s body had been in that freezer. However, despite the increased risk, my sister-in-law Marjorie, also a domestic helper has opted to stay in Kuwait.

Ban on Future OFWs to Kuwait

Philippine President Rodrigo Duterte had already ordered a total ban on the deployment of overseas Filipino workers, OFWs, to Kuwait. After the tragic news of the torture and death of Demafelis, Duterte ordered a voluntary repatriation of any OFWs in Kuwait who wish to return home.

Cebu Pacific Air management has announced it was sending an aircraft to assist the government in its efforts to return overseas Filipino workers in Kuwait to the Philippines. The move followed Duterte’s appeal to airlines to help in repatriation efforts in the wake of recent deaths of Filipinos in Kuwait.

800 individuals from the Kuwait are set to return this coming week.

There are more than 250,000 Filipinos in Kuwait and the majority of them, like my sister-in-law, work as household service workers.

Hunt for the Killers

The Philippine government has filed a homicide case against Lebanese employers Nader Assaf and his Syrian wife, accused of torturing and killing Demafelis. The couple reportedly fled Kuwait in 2016 after an arrest warrant was issued for the Lebanese man in relation to cases on fake checks.

Demafelis was identified through her fingerprints, according to Department of Labor and Employment secretary Silvestre Bello III.

The body was found while authorities were serving an eviction order in an unoccupied apartment.

Kuwait authorities are searching for the couple in Lebanon to arrest them with the help of Interpol. The couple have a known address in Lebanon.

Demafelis’ case is among seven recent Filipino deaths in Kuwait that had prompted the government to order a deployment ban to the Gulf State.

Duterte also threatened to withdraw all Filipinos from Kuwait if another worker dies there. Reports showed that 103 OFW deaths were recorded in Kuwait, up from 2016 figures at 82.

Working to Support the Family

Demafelis went to Manila after graduating from Sara National High School and worked there for several years until 2014, when she went home and asked permission from her parents to work in Kuwait. She wanted to work abroad to help her family and support her siblings.

Demafelis was also paying the tuition of her younger sister, who is taking up a bachelor’s degree in criminology, but the latter stopped going to school when the OFW stopped sending money.

Demafelis worked in Kuwait as a household worker in 2014.

The family said on the first three months, their communication with her was constant. In 2016, Demafelis expressed intent to stay in Kuwait for one more year, according to her sister Juliet.

“She (Demafelis) still managed to call me to say she was extending her stay because she was doing OK,” the sister said. That was the last her family and relatives heard of her.

Gradually, communication stopped, until February of 2017, when family members had to seek help from the Overseas Workers Welfare Administration.

According to OWWA, officials did their best to contact the migrant worker but failed to reach her since her agency had closed down.

This past Friday the OWWA finally reached out to the family. However, there was only sad news to deliver: Demafelis had died.

Ban will Reduce Remittances to Philippines

While the ban of OFWs to Kuwait would reduce its income,   Duterte said the country was ready to suffer but not at the expense of the lives of Filipino workers.

“Do not destroy their dignity as a human being,” President Duterte said.

“Let them sleep long enough. (One) complaint is that they’re fed with leftovers, that’s why they commit suicide. They can’t take it anymore, including rape.”[i] [ii]

OFWs in my Wife’s Family

As mentioned in earlier posts, my own wife worked for years as a domestic helper/caregiver in Singapore and Taiwan. My future spouse worked for two different families in Singapore. Here first female boss in Singapore was abusive. Her second job in the country was as a nanny.

My asawa also worked in Taiwan until the end of December 1999, a few weeks before we were married in Manila. During her two-year employment in Taiwan, she was not given one single day off. She knew that if she complained, another Filipina would only replace her.

Like the poor woman from Iloilo, my wife, too, first left Guimaras, her island home, to work in Manila to help support the family.

My wife’s sister Marjorie insists she has a “good family.” She has opted to stay in Kuwait to help finance her son’s last three years of college in Guimaras. Her son, “Sherman,” our nephew, has lived with us, along with his sister Shaina, since about age six.

My asawa’s brother Moises works as a fishermen off the coast of Malaysia as does a brother-in-law. Luis, my spouse’s brother, worked overseas years ago and was murdered while working on a tanker off the coast of Africa.

Working overseas and being separated from your loved ones is a lonely, hard life. However, over 10 million families do so without complaining in order to support their families. It’s a hard life in the Philippines for millions of people. It’s an even harder life for those Filipinos sacrificing their personal comfort and safety to make sure the family back in the Philippines has enough to eat.

God Bless, Joanna Daniela Demafelis. We extend our heartfelt deepest sympathies to her family as she made the ultimate sacrifice for her loved ones back home.