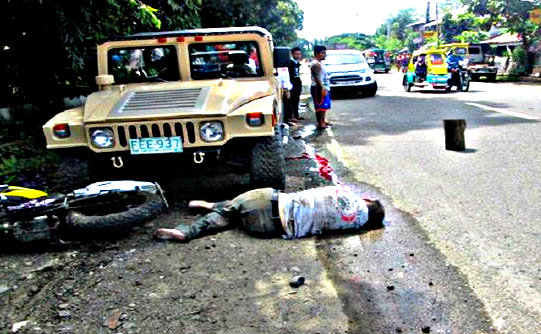 Maybe the helmet was thrown off during the crash. But if you’re riding a motorcycle in the Philippines and a jeepney crashes into your bike, the outcome is never going to be good, whether you have a helmet or not.

Mateo Movillon was a 54-year-old citizen of Texas, the United States of America. The American expat in the Philippines lived in Barangay Baybay Sur, Miag-ao, Iloilo province. Miag-ao is about 47 kilometers from Iloilo City, approximately 90 minutes.

The American expat was taken to a clinic in Miag-ao but the attending physician, Dr. Glen Dale Fantonalgo, declared him “dead on arrival.”

Jeepney Driver Turns Himself in

Mateo was driving a Kawasaki BR200A motorcycle and was bound for Barangay Igtuba proper at the time.

The police report stated that the victim was making a left turn when a public utility jeepney (plate number FVW-865) crashed against his motorcycle. The impact threw the American off his vehicle.

The jeepney driver, 38-year-old Rommel Nagrit of Barangay San Francisco, Anini-y, Antique, surrendered to the Miag-ao police. He was detained at the municipal police station. The article in the Panay News did not state what charges the jeepney driver faces, if any.

Section 3 of the Republic Act No. 10054, known as the “Motorcycle Helmet Act of 2009,” requires the MANDATORY USE OF MOTORCYCLE HELMETS FOR ALL DRIVERS AND RIDERS.

Only tricycle drivers are exempt from this helmet law.

Standard protective motorcycle helmets are appropriate types of helmets for motorcycle riders that comply with the specifications issued by the Department of Trade and Industry (DTI).

Section 7 of the “Motorcycle Helmet Act of 2009” spells out the penalties for violating this law. 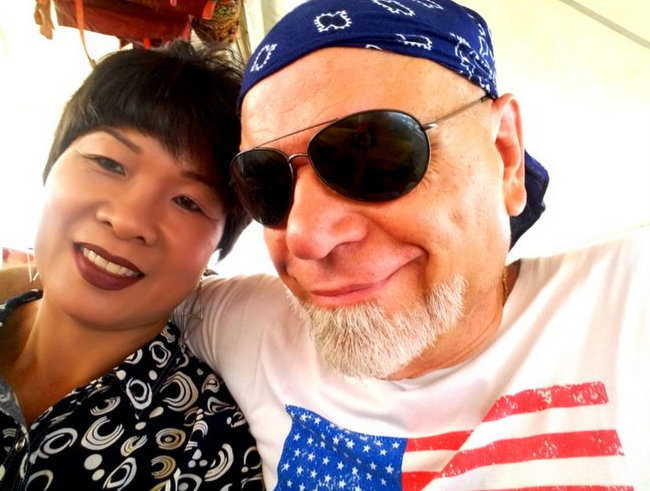 Despite the bandana I wear, as seen in the photo above with my lovely Filiplina wife, I’ve never owned a motorcycle in the Philippines or the States. While a down payment for a new bike in Guimaras, our island province, only costs 2,500 pesos, 50 bucks, I never wanted one. I figure I would get killed riding one within a week. Especially in the Philippines.

Why the Philippines? Because enforcement of the motorcycle helmet act is virtually non-existent, at least on our tiny island province and other provinces I’ve been to in the Philippines.

While I did hear of a police checkpoint last week in Guimaras, I personally haven’t seen one in years. An informal survey I did of 1,000 motorcyclists in Guimaras revealed that less than 10% of the cyclists and their passengers were wearing helmets. Now the American expats that I hang out with on a Friday night that ride motorcycles exercise good common sense and all wear helmets.

Long-time readers of this blog may recall a story I did over eight years ago regarding the death of my asawa’s Cousin Edgar.

Cousin Edgar, one of my wife’s favorite relatives, visited us one Sunday afternoon at my spouse’s home I jokingly called “The Compound.” Many times my better half’s family had visited their cousin who had always given them food and shelter. The affable Edgar had come over to the house on his motorcycle wearing his helmet that day to drop off my father-in-law . 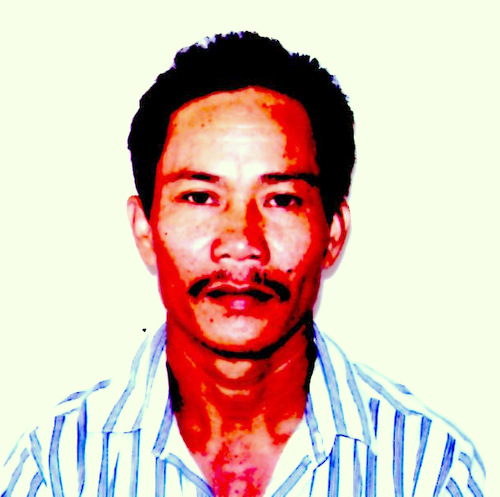 However, the next day, Cousin Edgar, was lying in a coma at our local hospital hooked up to a ventilator. He was in a motorcycle accident earlier in the day near his home and for some reason was not wearing his helmet.

Edgar died of massive head injuries later in the day. Cousin Edgar left behind his wife and three children and was dead at the age of 48.

So please, no matter how much you might dislike wearing a helmet when you’re on that motorcycle, don’t forget what happened to the poor American expat from Texas and Cousin Edgar. Wearing that helmet, might just save your life.