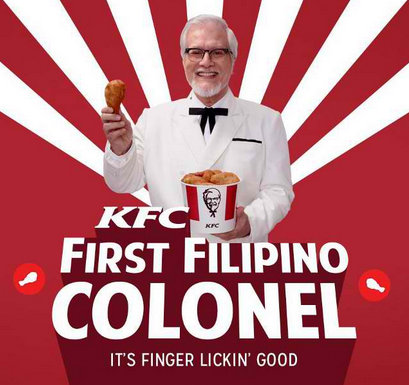 It was around 8:00 pm on a weeknight. Despite numerous power outages from our “service” provider, Guimelco, we miraculously had electricity that evening as I flipped the remote to Channel 2, ABS CBN. It was time for my asawa’s favorite program, ”FPJ’s Ang Probinsyano.” As I steeled myself for a block of 10 minutes of commercials for Tide Detergent, multiple pain relievers from Unilever, and the same tired Selena Gomez Pantene ad, a new advertisement brightened our screen. The search for Kentucky Fried’s first Filipino Colonel was underway!

Now I remember my first bucket of chicken from the Colonel back in the Sixties when our family lived in Springfield, Illinois. We had a KFC joint just across from the Dairy Queen. What could be better than a bucket of Colonel Sanders’ fried chicken, mashed potatoes and coleslaw topped off with a Dilly Bar from DQ for dessert?

So when I saw that commercial where three Filipinos were vying for the title of the first KFC Filipino Colonel, I immediately took interest.

A Filipino version of The Colonel? Outstanding! While I don’t think my asawa understood my enthusiasm, I blabbered on and regaled her with the story of how Harland Sanders began the Kentucky Fried Chicken franchise while in his sixties.

Hmmmm. Seems I had told her that story before.

And the Winner is!

Three veteran Filipino actors were vying for the title of first Filipino Colonel Sanders. I immediately declared Ronaldo Valdez as the hands-down winner. Come on! Valdez had no real competition. Valdez, on the far left, could have passed for the real Colonel’s twin.

The majority of Filipinos agreed with my assessment as Ronaldo Valdez won the title of KFC’s First Filipino Colonel.

“I am proud and honored to be KFC’s First Filipino Colonel. Even before auditioning, I was already a big fan of KFC. My go-to order is the Original Recipe chicken paired with a side of rice and unlimited gravy,” shared Valdez.

“We’re excited to have Ronaldo Valdez on board as KFC’s First Filipino Colonel. I am confident that he can fulfill his duties as Colonel while adding his own Pinoy flair to the iconic fried chicken forefather. This is just the start of many more good things to come for the brand and we look forward to the same level of support from our consumers,” said KFC Philippines General Manager Chacha Juinio. (Source: Manila Standard) 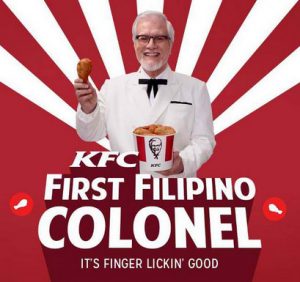 Overdue for a KFC Visit

I’m way overdue for a visit to our local Kentucky Fried Chicken outlets in nearby Iloilo City. My asawa and I haven’t been to a KFC in months. I’m at a loss to explain why we haven’t been to one but we have visited Max’s Chicken, which is my spouse’s favorite chicken joint.

While Max’s chicken is tasty I’m a sucker for some good ol’ Kentucky Fried. We’ll been in Iloilo City soon to do some shopping and I’m going to make it a point to visit the local KFC. And rest assured, I’ll be getting side orders of mashed potatoes with gravy and creamy coleslaw. Make mine Extra Crispy, please.