A serious topic for today’s post: “Expat Healthcare in the Philippines: Are YOU Prepared?” Do you think that if you move to the Philippines and become ill that the Philippine government will help you out? You’re not in Kansas anymore, Pilgrim. YOU NEED TO BE PREPARED FOR ANY CONTINGENCY BEFORE MOVING TO THE PHILIPPINES. There’s no safety net for foreigners in “paradise”.

There’s no forced-fed Obama Care in the archipelago. And there’s no alternative in the States yet either, aside from Medicare, if you’re 65 and over. Plus, you have to be willing to fly back to the USA or possibly, a U.S. territory like Guam, if you’re an American expat in the Philippines.

As a foreigner in the Philippines, your healthcare options are limited.

The availability of cheap cigarettes and booze contribute to health problems in the Philippines. The legislature passed a so-called “sin tax” a few years ago. While it might have added a few pesos to your bottle of San Miguel Pale Pilsen or pack of Fortune cigarettes, I doubt that the tax has done much to slow down the rate of alcoholism or lung cancer in the PH.

But it’s great to live in denial, isn’t it, and think you’re immortal and will live forever? But sometimes you have to come down to earth, and realize that you have a reasonable chance of becoming ill sometime in your life.

Plus, as all you old geezers like me already know, the older you get, your odds of become struck down with a major illness certainly increase.

So I beg the question: “Expat Healthcare in the Philippines. Are you prepared?”

IS PHILHEALTH A VIABLE OPTION?

PhilHealth is the national health insurance company of the Philippines. My wife signed us up for PhilHealth several years ago. It CURRENTLY only costs 2,400 pesos a year, 48 bucks, for both of us.

It came in handy back in December 2015 when my wife contracted both dengue fever and pneumonia. My better half was in the hospital for two days after being admitted to the emergency room. Thanks to PhilHealth, the TOTAL cost of her hospitalization was 100 U.S. Dollars. We only had to pay for some medications, PhilHealth handled the rest of our hospital bill.

Now PhilHealth doesn’t cover everything so if you find yourself needing any major operations, you need a back-up plan.

That said, I strongly recommend signing up for PhilHealth if you intend to live in the Philippines. Is PhilHealth available for foreigners that are not married? Yes.

Foreign citizens with valid working permits and/or Alien Certificate of Registrations (ACRs), working and/or residing in the Philippines my qualify in the Informal Economy Members classification per the PhilHealth website.

If an existing medical condition is hampering your own move to the Philippines, keep in mind the low cost of doctor’s visits, only about $7.00 in most cases.

BUT, if you have major health issues, you might consider staying right were you are. While doctor’s visits are cheap in the Philippines and caregivers can be hired at extremely reasonable rates, I personally wouldn’t move to the Philippines without a safety net.

As this post goes to press, there is word that PhilHealth is going to substantially raise their premium rates for foreigners this coming June 2017.

We’re currently eligible to be covered on our spouse’s plan (at 600 pesos a quarter), or independently at the same price, but that is about to change. For those of you on SRRV visas the premiums will rise from 2,400 pesos annually to 15,000 pesos.

For other foreigners the fees will be an extra 2,000 PHP on top of the SRRV rate.

Despite the increase, I will continue to stay on my asawa’s policy. I’m fortunate to have Medicare Parts A&B (I intend to keep Part B, no cost for Part A.) I also have health insurance options as part of my retirement benefit package from AT&T where I worked for almost 30 years.


HAVE AN ADEQUATE EMERGENCY FUND

My spouse and I also have a very adequate emergency fund in addition to all the healthcare options we already have. While I’ve had a few kidney stone attacks in the Philippines, I haven’t had any major health issues, fortunately.

Regular readers, don’t let the past stories about partying at the Manggahan Festivals in Guimaras or Red Horse fool you. We don’t even have any alcohol in the house. When we go out, I rarely drink more than two bottles of San Miguel Pale Pilsen.

I don’t smoke. Never have. My pool boy activities give me plenty of exercise. No, I just don’t rub sun tan oil all over some pretty pinay’s back, I actually clean our pool twice a day. This takes me anywhere from one to two hours daily. It’s tough being the resident sexy pool boy.

Expat Healthcare Philippines: Are YOU Prepared?

Pacific Prime offers health insurance plans for expats throughout the world. I used their insurance quote tool to get a look at what plans are available for a 65-year-old crusty old expat. Here are the results of my inquiry: 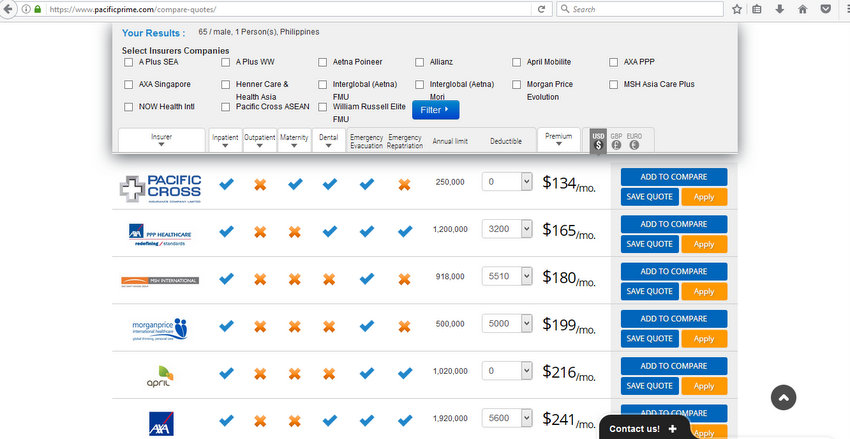 Pacific Cross doesn’t have any deductible and has the lowest monthly cost. However, it only offers an annual limit of 250,000 dollars. If you don’t have any retirement insurance benefits available like I have from AT&T, it might not be a bad idea to check out expat healthcare plans Pacific Prime offers. (Editor’s Note: I don’t receive one centavo of compensation for mentioning Pacific Prime or Pacific Cross in this post.)

AS A FOREIGNER ARE YOU REQUIRED TO HAVE OBAMACARE?

Are US citizens living or working abroad required to get affordable health care insurance or pay the penalty under the Patient Protection and Affordable Care Act (PPACA), Obamacare?

If you are a US citizen or resident alien abroad and you meet the bona fide resident test* or the physical presence test**, you are considered to have essential minimum coverage under the Act.

You will not be required get affordable health care insurance or pay the penalty under the PPACA for the month or months that you qualify for either of these tests.

The Physical Presence Test is one of the two tests US citizens and green card holders living abroad can use to qualify to claim the Foreign Earned Income Exclusion, the Foreign Housing Exclusion, or the Foreign Housing Deduction. If your tax home is in a foreign country, the Physical Presence Test or the Bona Fide Resident Test can be used by an expat to maximize the exclusion of their foreign earned income and avoid double taxation.

What are the requirements to meet the physical presence test?

To meet the physical presence test, you must

1. You must be physically present in a foreign country or countries for at least 330 full calendar days during a period of 12 consecutive months

2. Be a US citizen and resident alien

Again, if you have a serious medical condition and are considering a move to the Philippines, weigh your options very carefully before making your move. And, if you don’t have a guaranteed monthly source of income and only have limited savings, you might be wise to stay put.

Many future expats believe they can move to the Philippines and find a job or start their own business, like opening a resort on a tropical beach. While it is not impossible for a foreigner to survive in the Philippines without a guaranteed monetary safety net, it won’t be easy.

Please don’t end up like the befuddled old foreigner my asawa and I have seen wandering the streets of Iloilo. He’s emaciated, wears filthy ragged clothes and could very well be homeless. For your own sake, please make sure you have a viable plan for moving to the Philippines before you even think about coming here. “Expat Healthcare in the Philippines: Are YOU Prepared?”