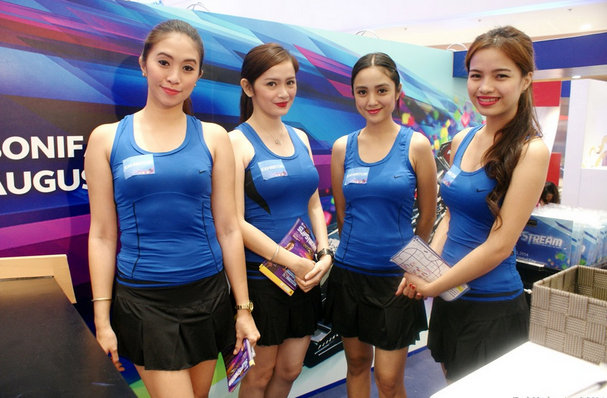 I’m excited about Globe’s new sensational super duper internet plan, which is simply called “The Plan”. Brothers and Sisters in the congregation, lift up your hands and shout “Amen!” It’s a joyous day for this American expat in the Philippines. I’m more excited than Thor at a two-for-one sale on hammers!

MIRACLE AT “THE FARM”

First of all, let me give you some background on my past experiences with Globe Telecom.

Globe WiFi  was first installed for us at “The Farm” but their so-called “fair use” policy was a pain in my posterior. “The Farm” was our residence in Guimaras before we built our new home in the Philippines.

After eight months without an internet provider at our rural location on our island province, we finally had access to Al Gore’s World Wide Web. As a result, I had to download any new stories for “Philippines Plus” to my flash drive and then sojourn to our local internet cafe.

Because I had an “unlimited” plan with Globe for 999 pesos a month, 20 bucks, I assumed my internet speed would be reasonably fast throughout the whole month. I assumed wrong.

Why was the so-called “Fair Use” Policy implemented by Globe in the first place?

The telecom claimed that they wanted to “protect” the experience of 97% of their subscribers from the evil 3% who took up more than their fair share of the network bandwidth.

Globe claimed those most likely to be affected by the Fair Use Policy were those who use peer-to-peer applications to download large files. Or use their mobile phone as a personal hotspot. Or stream videos heavily on a daily basis. Problem is, I didn’t fit into any of those categories but my 999 peso a month “unlimited” plan was slowed down to dial-up speeds when I exceeded 3GB for the month.

As a result, by the middle of the month it would take almost an hour to check my email and hours to even write one short post for this website. Therefore, I drastically reduced my input for this blog. I would have to wait until the start of the next month to resume my normal speed. It was frustrating to say the least.

But hallelujah!  I’m speeding along the internet today and it’s near the end of the month. So what do I owe this auspicious event to? The expiration of my asawa’s text and calling plan.

My spouse’s plan cost 999 pesos a month, 20 US Dollars. However, it didn’t even allow her unlimited calls and texts to other Globe subscribers. The plan also did not include any separate internet allowance for her phone.

But when we walked into the Globe outlet at SM Delgado in nearby Iloilo City to renew our contract, our customer service rep informed me of their new plan, simply referred to as “The Plan.”

My wife was able to keep her current number with her new plan for a cost of only 799 pesos a month, 16 US Dollars. Not only did her new plan include “unlimited” calls and texts to other Globe subscribers, it also gives her “unlimited” texts to other carriers such as Smart. I was impressed. And my wife will get a new phone to boot (the office was currently out-of-stock for the new phone she wanted.)

Then it came to my internet service. As mentioned, my previous 999 peso “unlimited” postpaid plan only let me surf up to 3G before my service slowed to a crawl.

My new plan, however, now gives me 16G of monthly service for the same price as my old plan, 999 pesos a month! That’s an increase of 13G’s!

Regular readers of Philippines Plus know that I, the crusty old expat, occasionally rant and rave on this site (and in public.)  But I’m here to tell you that I received exemplary customer service from the employees at Globe SM Delgado.

I was first in line at Globe the morning we went. (I sneaked in through the SM Supermarket which opens at 8:00 am. The rest of the mall opens at 9:00. Since the supermarket is now remodeled I don’t have to wait for the overhead gates to open. I used to sneak under the gates before they opened all the way and piss off the supermarket security guards. Now you can exit without having to wait for the overheads to open.)

I had just edged out another “kano” who sat next to me who evidently went through the main mall entrance.

The Globe representatives were very helpful and polite. I was required to open up another line to “avail” of the new internet plan but the reps filled out all the paperwork for me. As a result, all I had to do was sign my name on the forms they had completed.

What with me only waiting 10 minutes to do my Annual Report as an Alien at Immigration, I’m on a roll. Two positive customer service experiences in the Philippines in a row. I’m happier than a unicorn eating cake on a rainbow!