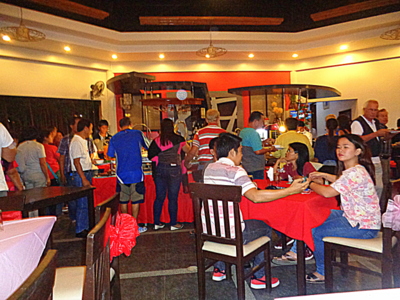 My lovely asawa and I recently witnessed a St. Valentine’s Day Massacre at the Guimaras Mountain Resort. OK, I, confess. Maybe only a few turkeys and chickens were actually sacrificed for the buffet dinner. However, Valentine’s Day, 1929,  in Chicago, produced a very “Bloody Valentine.” Seven members of “Bugs” Moran’s gang were gunned down. The slaughter was attributed to rival gangster Al “Scarface” Capone.

Our buffet dinner at the Mountain Resort in Guimaras was a bit milder event for the most part.

Fistfights could have broken out during the long lines at the event. Only one serving line was set up at the buffet table. But since the majority of the crowd were Filipino, and not teeth-grinding impatient foreigners like myself, no donnybrooks ensued.

The lead photo shows part of the massive crowd that showed up for the Valentine’s Day Buffet Dinner. The event, which we were told by staff on an earlier occasion started at 6:00 pm, actually was scheduled  to start at 6:30 pm.

It didn’t begin until almost 7 in typical “Filipino Time” fashion. I grind my teeth some more.

Word is a local mayor saw the long lines and left. Can’t blame him. 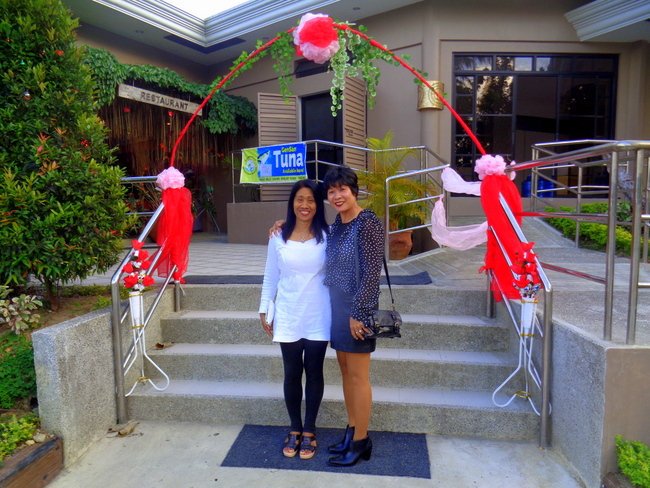 My lovely asawa on the right with one of her buds. 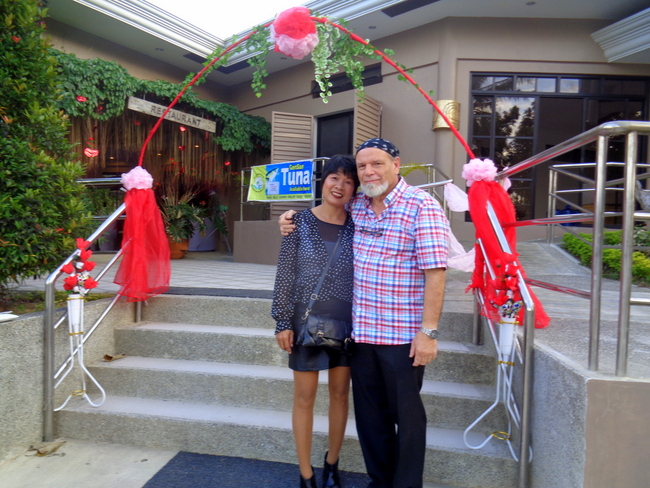 My special Valentine and “The Kano”, “Beauty and the Beast”

LIVE BAND FOR THE EVENT

The Guimaras Mountain Resort also scheduled a live band for the event, a trio with a female lead singer. The group played for about two hours. My asawa really liked the band. Me? I was indifferent since my main focus was on getting more turkey, a rare dish in the Philippines.

Kudos, to the Resort, however, for the elaborate decorations that were furnished for the event. The establishment went all out in providing a special Valentine’s ambiance for the occasion. 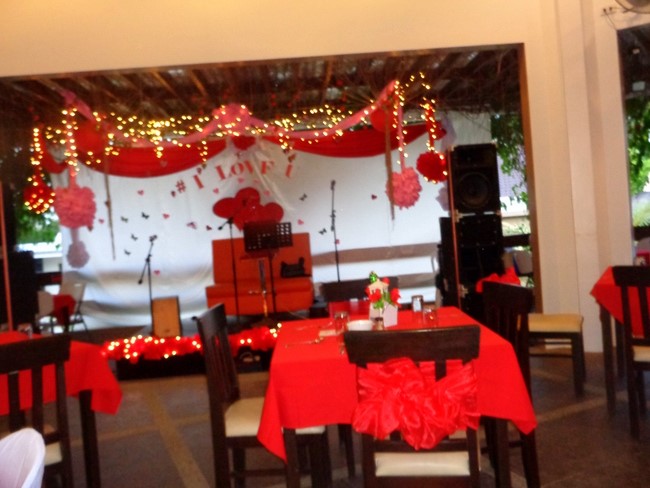 SPECIAL RESERVATIONS FOR THE FOREIGNERS 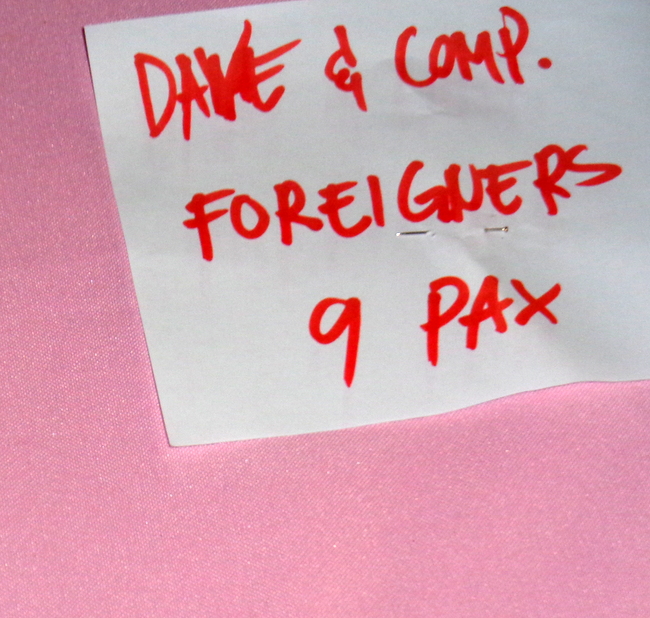 Our group really didn’t have to show up so early. Again, we were told the event started at 6:00 pm, not 6:30. As soon as we entered the dining area we were approached by the manager.

“Because I’m an American, ” I replied, “plus, your staff told us on Friday that it began at 6:00.” We had been at the Guimaras Mountain Resort the previous weekend. Another expat with us, confirmed he was told the same.

But because I’m an a crusty old expat with a failing memory, I couldn’t even remember what I had posted on an earlier article regarding the resort. The joint, indeed, had displayed a 6:30 start time. 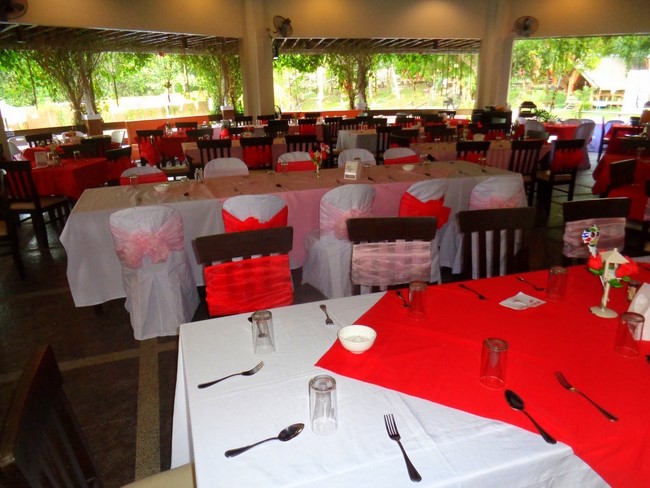 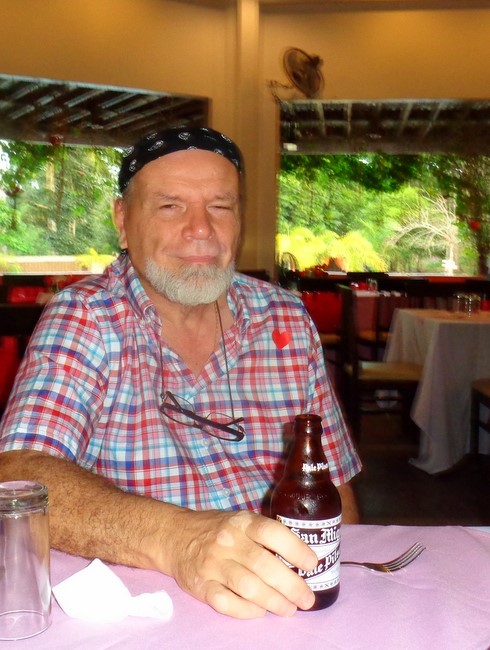 Check out the old geezer glasses I have on a string around my neck. One sure sign you’ve got one foot in the grave.

I had only quaffed one San Miguel Pale Pilsen as my stomach growled waiting for the buffet to start (beer was not included in the buffet dinner price of 390 pesos each, almost eight bucks.) My usual dinner time starts around 4:00 pm. It was already past 6:30 and I was growing surlier by the moment. But my wife and her friends were having a great time, chatting and patiently waiting. 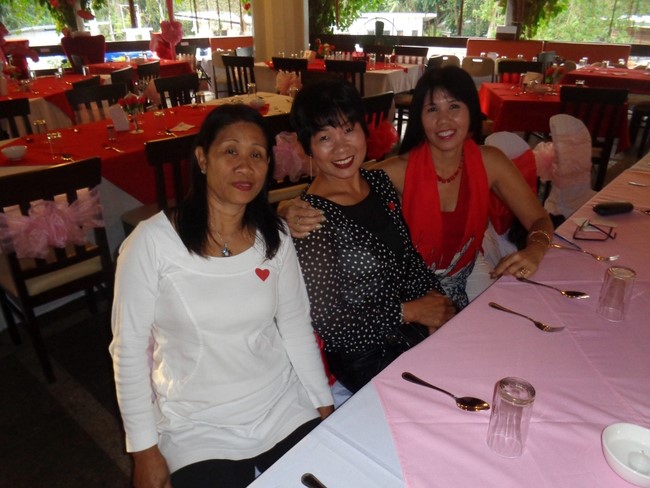 Finally, about 6:55 pm the buffet began. Only customers that had paid were allowed to go to the buffet first. Dozens of people were still at the entrance of the resort trying to pay.  Only one cashier handled the overflowing crowd.

I made a beeline to a roasted turkey I spied at the end of the line. Nothing else on the menu really appealed to me. I passed on the Ox Tongue.

But there was no one to carve and serve the turkey.

Finally, after complaining to three employees and five minutes later, a server carved the bird.

I get even grumpier than usual when I’m hungry.

Aside from rice, which was on the menu of course, there was salad, chicken and a couple of Filipino dishes I passed on. Frankly, there were not that many dishes to choose from and the buffet was a disappointment.

That said, my asawa and her friends had a good time. They always do.

The event closed at 9:00 pm. All the food was gone. I spent the bulk of the evening speaking to a British and Australian friend. 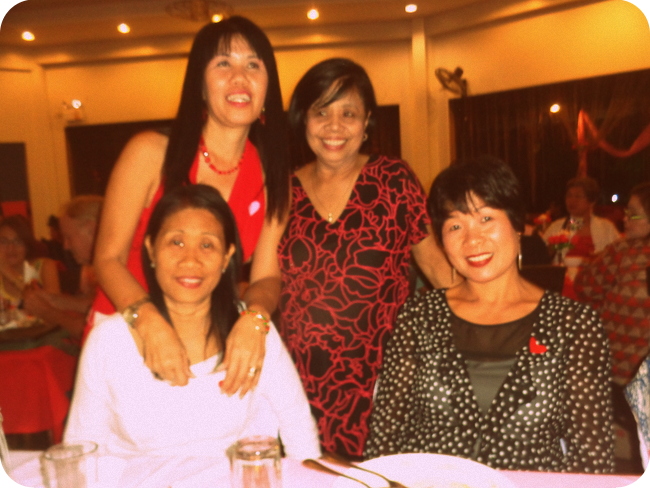 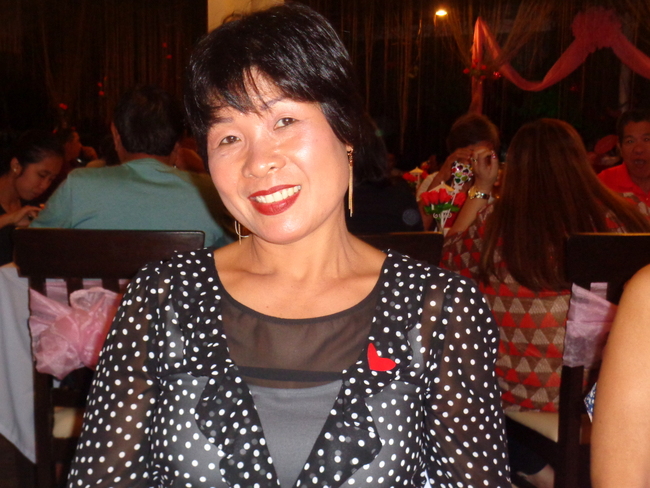 BUT IT WAS A  SPECIAL VALENTINE’S DAY CELEBRATION

OK, despite my lack of enthusiasm for the food, it was a special Valentine’s Day celebration. It seemed like hundreds of people turned up for the event. The Guimaras Mountain Resort was the place to be on our island provincial home that evening. And my spouse enjoyed herself; that’s really all that matters, right?

Here’s an extra-special Valentine’s Day story I saw in the Panay News.

Loser Live-in Partner Runs Off with the Cash

Almost P200,000 in cash and personal property was stolen from a woman on Valentine’s Day. That’s about 4,000 in US Dollars, Pilgrims.


Jennifer Franco, 39, Iloilo,  filed a disturbing report to the cops. On Feb. 14, Valentine’s Day, she gave 39-year-old Shermay Abadonio – her live-in partner – P100,000 in cash and instructed him to process the tax declaration of a land.

Abadonio, however, disappeared after receiving the money, claimed Franco, a vendor at the Iloilo Terminal Market.

France also told the police that Abadonio also took her daily earnings amounting to P52,000 and two pieces of gold necklaces worth P42,000.

Franco learned that the suspect went to General Santos City together with a certain Rafie Bancuyo, police said.

President Duterte wants to bring back the death penalty. The former live-in  partner should be the first to be hung, in my books.