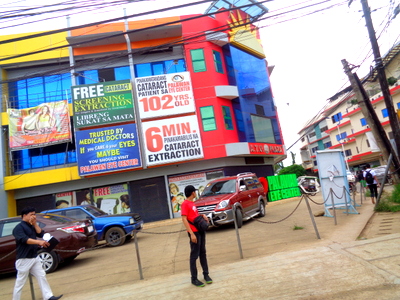 Puerto Princesa Palawan Paradise. Some mortals claim the Philippines is a heavenly utopia. Paradise, if you will. I retired to this archipelago over seven years ago. Paradise, it ain’t.

That said, I’m enjoying a comfortable, relatively stress-free life in Guimaras. Guimaras, an island located in Western Visayas, known for having the sweetest mangoes in the world. It’s the Filipino version of Mayberry RFD. They roll up the sidewalks at 6 pm. The most excitement we have is when a carbao takes a crap on the road and someone accidentally steps in it.

I have extensive experience on “stepping in it” and being “full of it.”

My lovely asawa and I recently traveled to Palawan, home of the world renown Underground River. We had three basic reasons for traveling there: 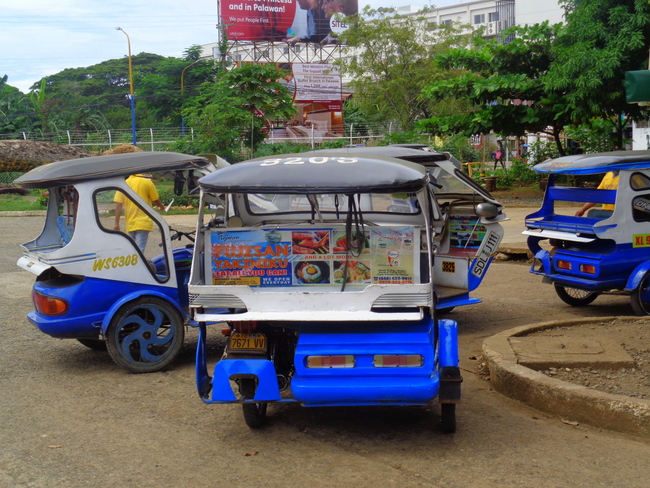 NO DOGS, NO LITTER

As soon as we took our first trip through downtown Puterto Princesa my asawa and I both noticed how clean the streets were. In Guimaras, and nearby Iloilo City, where we go shopping, the streets are littered with garbage.

Not so in Puerto Princesa. We traveled via tricycle almost 25 minutes and did not see one single piece of litter on the sidewalks or streets. We both were astonished.

And, we did not spy one single dog on the streets.  Stray dogs are as common in Guimaras and Iloilo as fixers at the Bureau of Customs. I was dumbfounded. We did not encounter one flea-bitten canine until the last night of our stay in Puerto Princesa. It was around 8:00 pm and the lone mutt was eating from a trash dumpster. My wife and I were headed back to our hotel after visiting relatives at the local Robinsons.

I’ve been informed that a city “dog catcher” makes the rounds every day in Puerto Princesa. All stray dogs are impounded for 20 days. If the owner does not claim their canine by then, the dog is euthanized.

A better fate, I suppose, then ending up on someone’s dinner table.

The city dog catcher was probably at home that night watching FPJ’s Ang Probinsyano kicking back with a Red Horse (the beer, that is.) The stray dog I saw that evening would live to see another day.

After checking in at Islands Stay Hotel in Puerto Princesa (more on the hotel in a future post), we made our way to our first stop at Robinsons Mall. SM (Shoe Mart) is building a new complex in PP but construction is not completed yet.

Our tricycle driver, seen below, charged us 80 pesos, 1.66 US Dollars, for the 25-minute trip, the going rate. My asawa tipped him a hefty 20 pesos. He was pleased to get the tip. 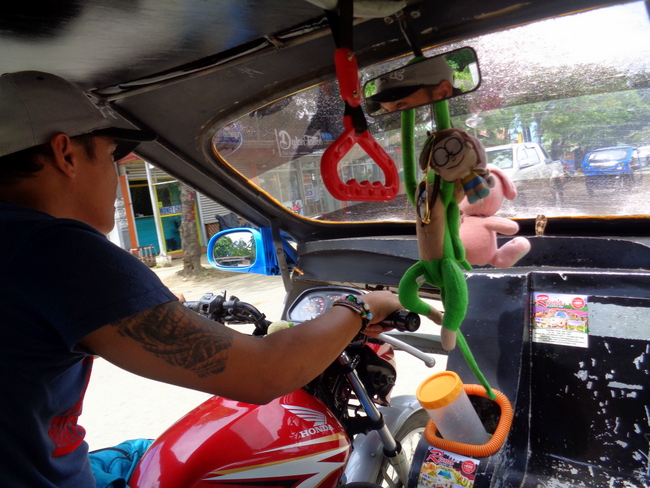 We were going to relax our first day in the city as we had planned a tour to the Underground River the next day. Traffic was snarled in the city. Our trike driver zipped in and out, even going on sidewalks at times to make his way through the congestion.

I was later told by one local that the traffic problem in Puerto Princesa has been a recent one. A few years ago there were no car dealerships in town. If you wanted to purchase a new vehicle your only options were to go to Iloilo City or Manila and pay cash, no installment loans were available. You also had to pay for shipping your vehicle to Puerto Princesa, so there were not many private vehicles on the road for years.

But now the local dealerships offer payment options and a person can buy a new vehicle with as little as 6,000 pesos, 125 US Dollars down!

The traffic tip came from an individual who used to work for a collection agency that handled motorcycle repossessions.  A dangerous job at times. One time, an angry individual went after the collector with a bolo! No motorcycle was repossessed that day. 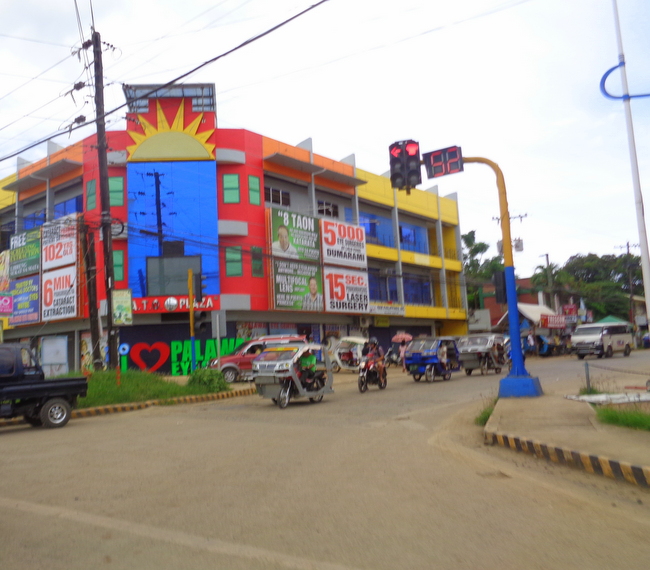 We arrived at Robinsons Place and my asawa agreed to pose in front of the mall for me. I always make it a point to have my wife photographed in front of every major mall we go to. It’s a pleasant reminder of various shopping outlets we have visited over the years. 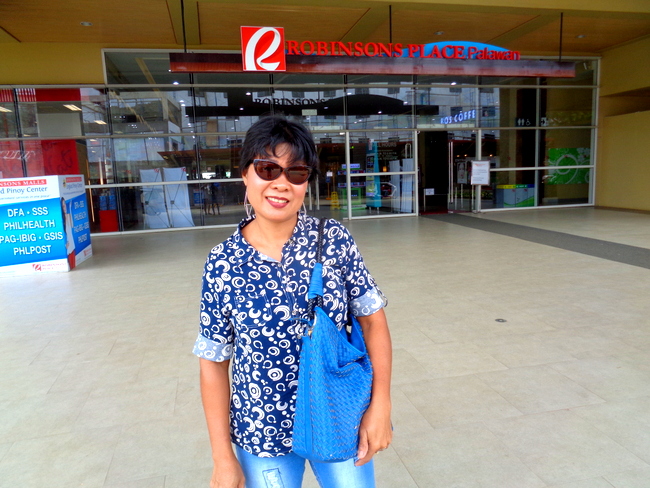 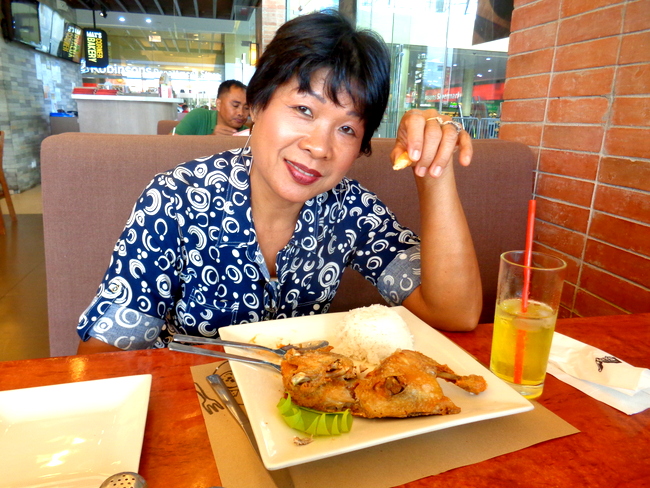 Also, I usually take a picture of the restaurants we have been to.  The picture above shows my lovely asawa enjoying a half chicken dinner for 299 pesos, about 6.25 US Dollars, at Max’s Restaurant. 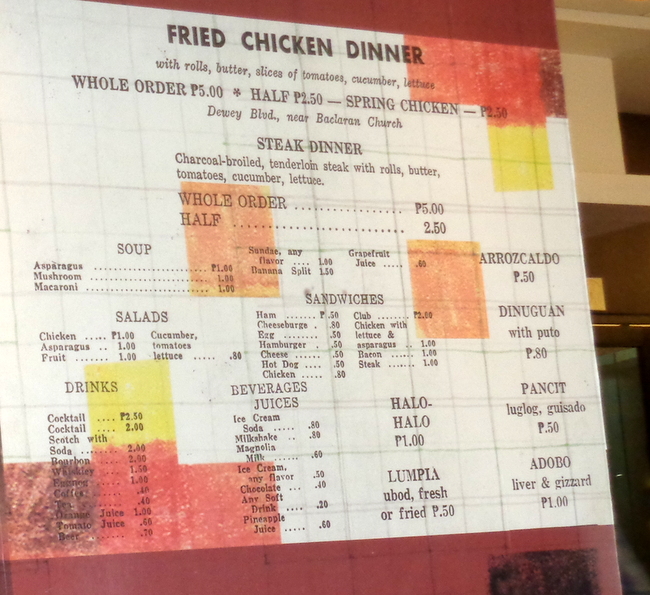 I like Max’s chicken. My asawa loves it. KFC still makes my favorite chicken but the offering from Max’s is perfectly acceptable. Here’s a look at what the first Max’s Restaurant in Quezon City looked like. 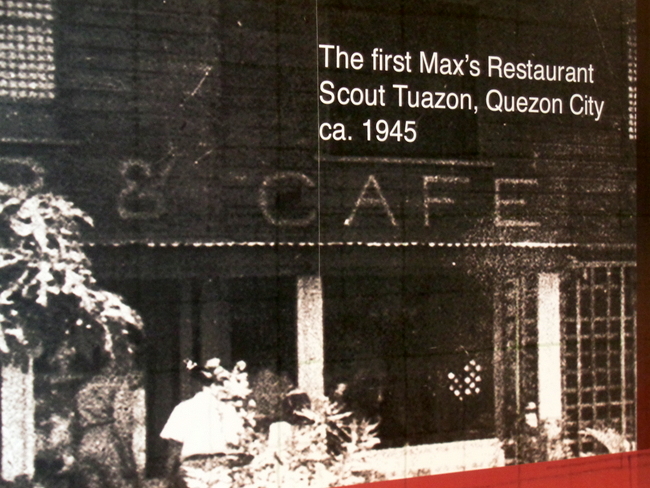 After we had our chicken dinners, accompanied by a small dish of ice cream for dessert, my spouse and I both had manicures and foot spas done. Total price of the package, which included pedicures, was 1,200 pesos, 25 US Dollars.

While back in Guimaras, however, we could have gotten the same package for less than half that price. But since we were on vacation, splurged and spent the extra cash.

We checked out a few shops at Robinsons after our manicures and pedicures and headed home.

Finally, though it was evening, we felt safe riding through the streets of Puerto Princesa, in another tricycle. There are not many taxi cabs in the city and the trikes are a great way to get around.

NEXT UP: OUR TRIP TO THE UNDERGROUND RIVER…OR SO WE THOUGHT