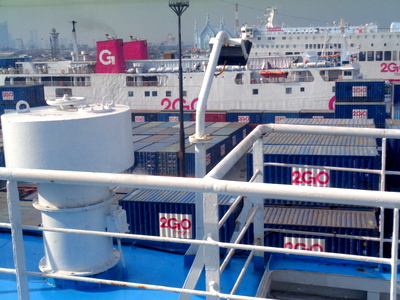 An unfortunate incident occurred during our luxury 2go cruise from Manila to Iloilo.  In a previous post, I related the tragic event in which a man jumped from our ship. At this time, the man’s body has not been found.

The 2Go M/V St. Therese of the Child Jesus cruise from Manila to Iloilo City was first-class all the way. The vessel’s last stop was Bacolod City but since we live in Guimaras, Iloilo would be our departure point.

All the perks we enjoyed on our voyage made the 22-hour-cruise pass by quickly.

That’s my lovely asawa relaxing on one of the double beds the room offered. The cabin’s total space was larger than some homes I’ve been in… approximately 125 square feet! Our space was at least three times bigger than the room we had at the Stone House Hotel Pasay City. 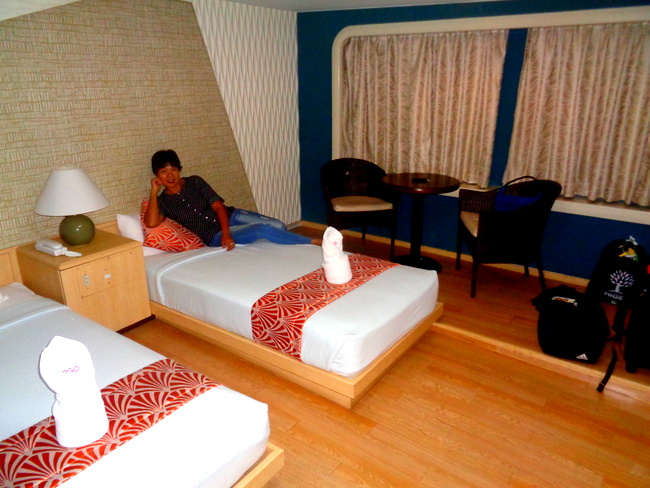 Two helpful employees from 2Go took our bags to the room after we checked in at the accommodations desk. The suite door was unlocked. My wife and I simultaneously exclaimed “WOW!”

We had never seen such luxury accommodations on any passenger ship we’ve traveled on in the Philippines.

The trip’s total cost? 4,289 pesos, about 91 US Dollars, from Manila to Iloilo.  We definitely had gotten our money’s worth. 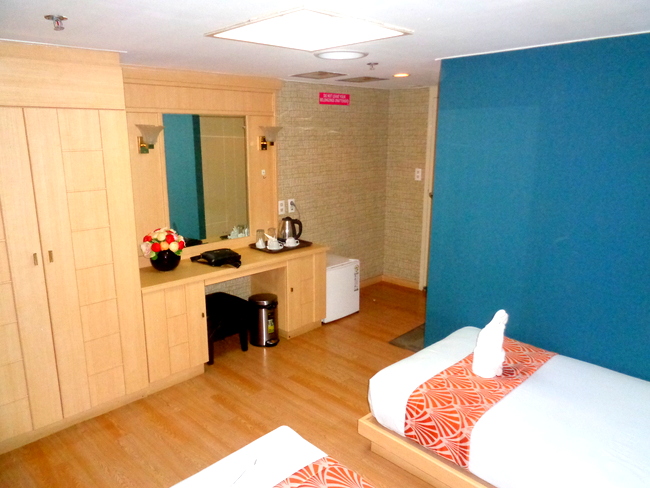 The room even had a mini-fridge plus a large wardrobe and cabinet space.  There was also an electric pot to boil  water for coffee or tea. If we would have known we had the hot pot, we would have brought along some of our favorite instant coffees.   Coco Mocha and Berry Mocha from Nescafé are some new products I’ve been trying. 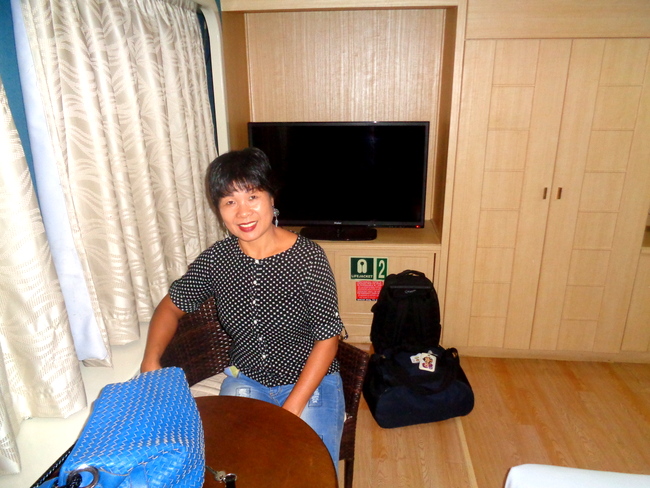 Another one of the amenities we enjoyed on our Luxury 2Go Cruise Manila/Iloilo was the large 50″ flat screen television. I had fully expected that we would lose the picture once we left Manila as has been the case on previous cruises we have taken.

But I was surprised to see that we kept a clear signal from all three major networks from the Philippines, ABS CBN, TV 5 and GMA during the whole voyage. We also had the Living Asia Channel and Star Movies.

I can only assume that the ship has some sort of satellite feed on board as all the programs were current. My wife got to watch the latest episode of her favorite show at 8 pm,  FPJ’s Ang Probinsyano (The Man from the Province.) 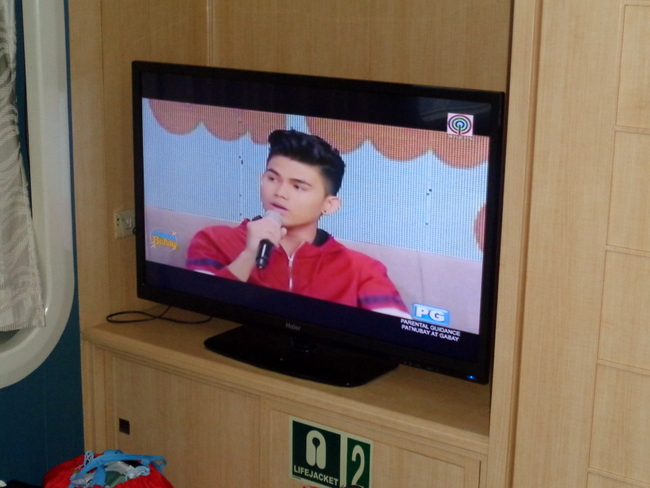 We even had a spacious CR, Comfort Room, in our 2Go luxury suite with a bathtub! And the toilet even flushed! 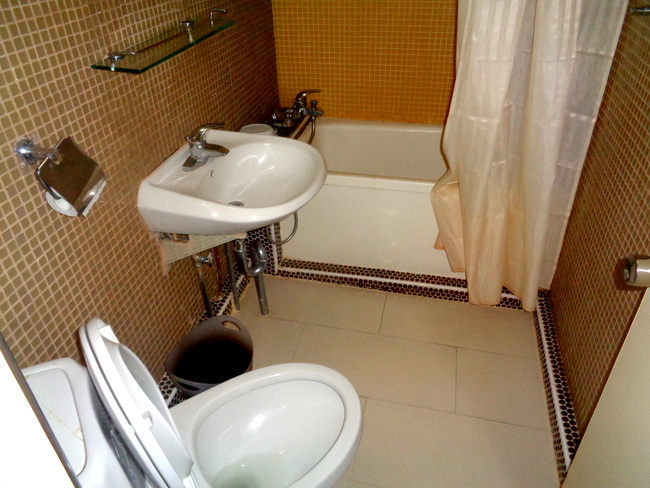 Meals were included in our ticket price. I took the following photo of my lovely asawa as she stood inside the Horizon Cafe. The restaurant itself was the best dining room we had even seen on any shipping vessel in the Philippines. The meals, however, were a disappointment. 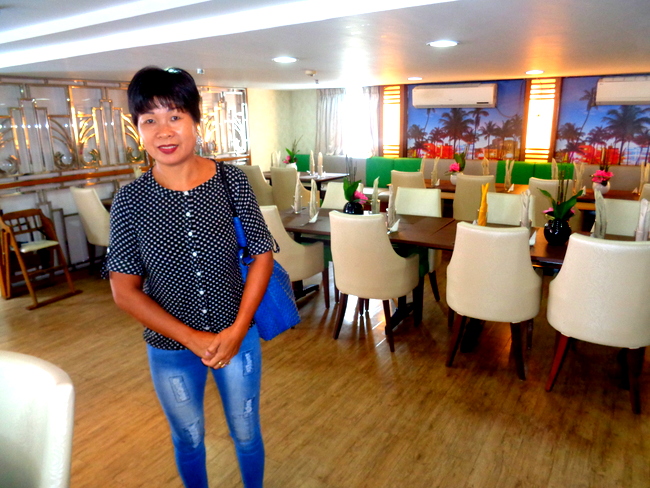 My wife might be smiling for this next photo, but I wasn’t happy about our fish filet lunch. Though the meal was superbly plated, the portion-size wasn’t nearly enough for a large American expat like myself. Soft drinks were an extra 40 pesos.

The fish fillets were alright. Problem is, we only got a few small pieces. My spouse even remarked that the meal wasn’t large enough and she rarely complains.

No going back for seconds. The meal was only dished out by the 2Go wait staff.

While the servers were polite and professional, our culinary experience aboard the 2Go M/V St. Therese of the Child Jesus was not the best. 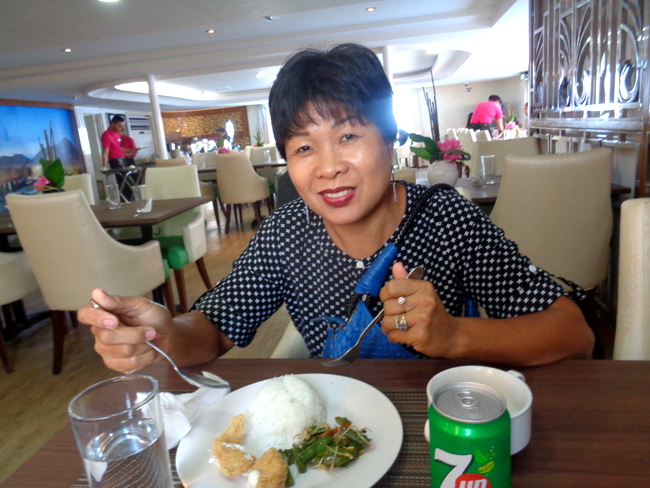 Dinner was even worse. We chose a beef dish which I found completely inedible. The beef was tough and chewy. I tired one tiny morsel of it and left it on my plate.

The ship did have a canteen on board where snacks and drinks were offered. But I snacked on a bag of white cheddar popcorn that I had purchased from the Mall of Asia SM Hypermarket the day before.

My popcorn, a Frito Lay export from America, claimed it was a “heart-healthy” snack. I really didn’t care. It tasted a lot better than my beef dinner.

There was even a spa on board the ship offering manicures and pedicures.  Our Luxury 2Go Cruise Manila/Iloilo had it all! My wife and I were extremely pleased with the amenities offered on this cruise and would definitely travel on this vessel again. We both highly recommend the luxury suite, and despite the unfavorable dining experience, don’t hesitate to give it 4.5 stars out of 5 stars.

I’ll leave you with some pictures I took as we approached the Iloilo Port.  Our departure was orderly and a porter carried our luggage from our luxury suite past a crowd of taxi drivers. We walked across the street from the Port Authority and my asawa hailed a cab for the short ride to Ortiz Wharf. At Ortiz we would catch a pump boat back to Guimaras, the island province we call home. Our journey from Manila was now completed. 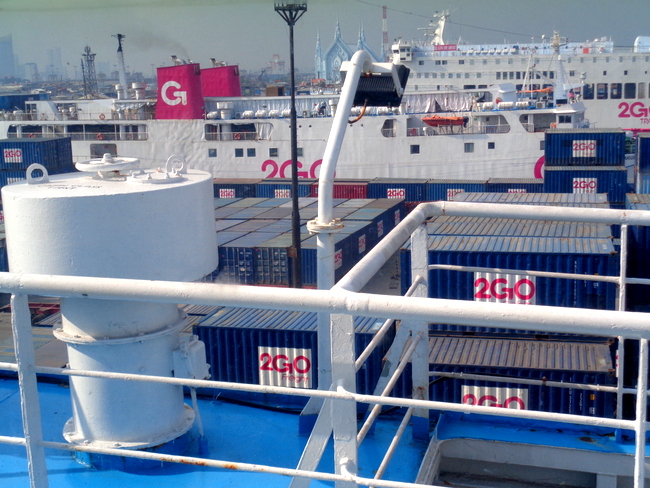 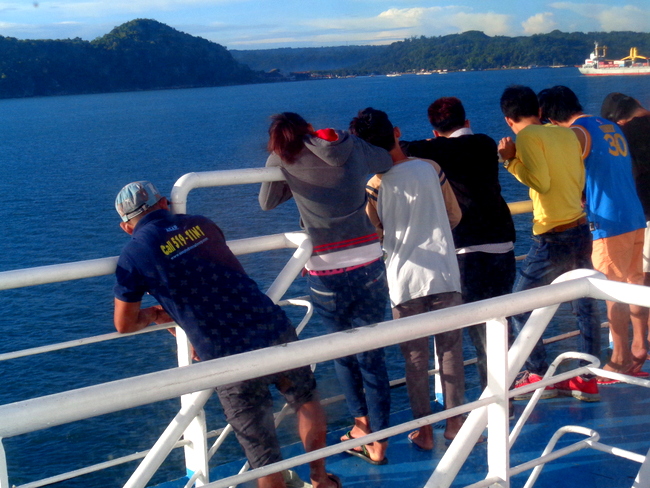 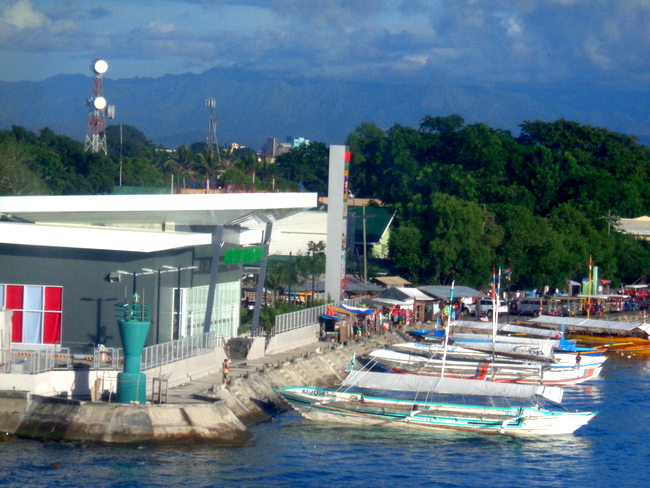 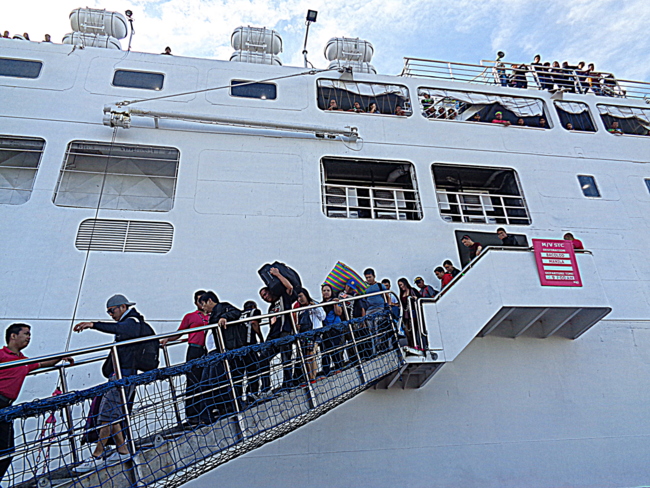 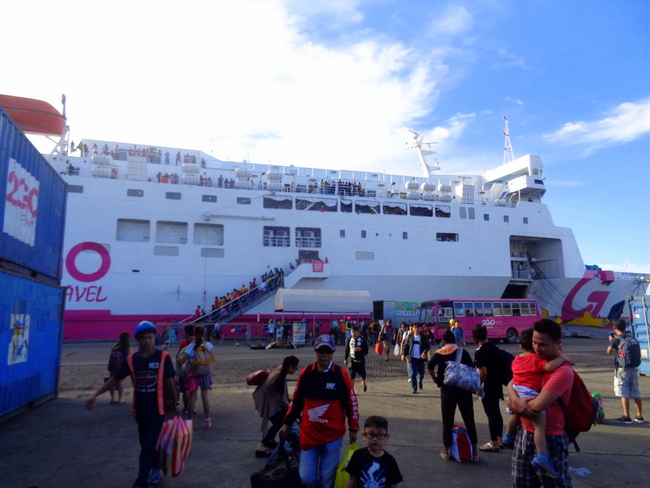