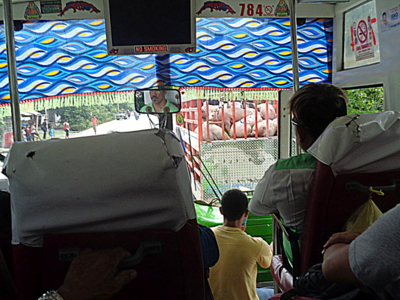 “The Dimple Star Road Trip from Hell: Guimaras to Manila, Part Two.” The madness continues. Why would any sweaty, overweight American expat in the Philippines subject himself to such torture? After seven years of living in this Southeast Asian archipelago, you’d think I’d have better sense than to board a bus without air con.

Our Dimple Star transport was packed to the gills with Guimarasons. After leaving our starting point at the “New Site” in San Miguel, Jordan, we arrived about 15 minutes later at the Jordan RORO station.

The RORO, Roll On, Roll Off Ferry, shown in the next photo, would take us to nearby Iloilo. The trip only takes about 30 minutes. This was the first of three ferries we would need to take us to our destination, Batangas. 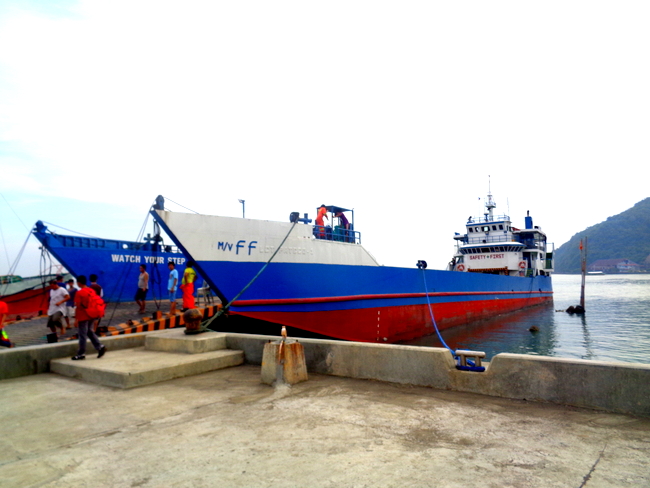 As we approached the Iloilo Ferry Terminal at Parola, I wondered if the powers-to-be had indeed closed down the old Parola Wharf. Iloilo City’s mayor had threatened to shut down both Ortiz and Parola Docks leaving the new terminal the only option for banca boats traveling from our home province of Guimaras.

Upon our return from Manila, Ortiz was still open. 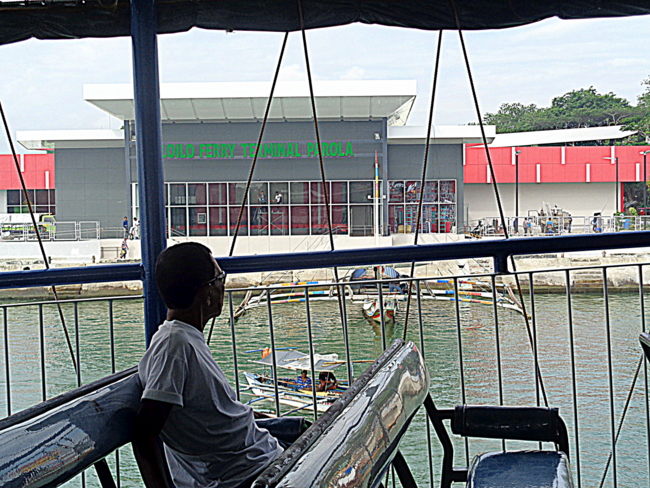 We will have to check out whether the new City Mall has opened though when we passed by it, we saw a multitude of workers still on site. 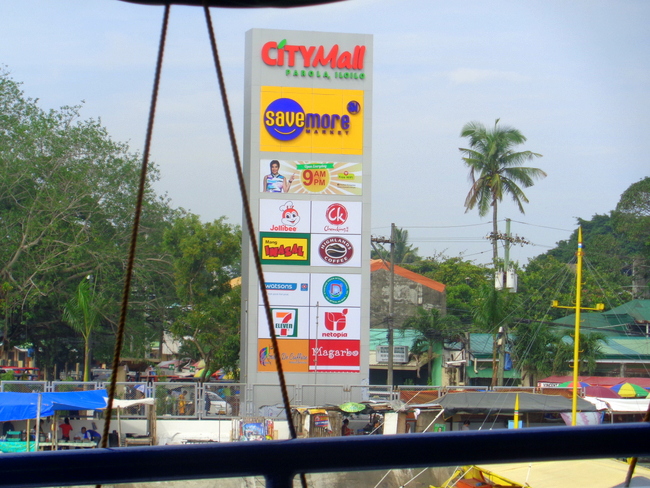 It was a cloudy day as we traveled through Panay Island. Our driver made the entire trip with a towel over his head but thankfully not over his eyes. Our conductor sported a multi-hued blonde hairstyle and was helpful in answering any questions we had.

A bathroom break was made around 9:30 am. My asawa and her sister Marjorie took advantage of the CR, Comfort Room stop. I stayed inside the bus, sweating like a pig at a Bacon Lover’s Convention. 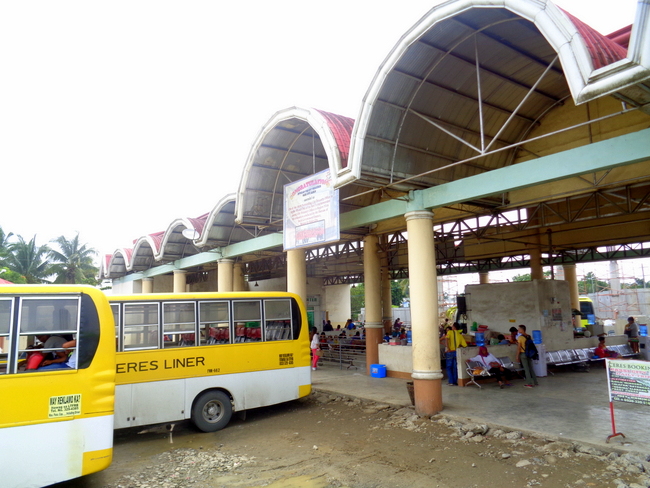 We made our next stop at noon. It was a 20-minute lunch break at a typical native-style eatery. I had no desire to go in. My spouse and Marjorie ventured inside and returned with a plastic bag of fried chicken for me along with a Coke.

Whitle it wasn’t KFC or Max’s but it was edible. The bus fired up its engine and headed for Caticlan, the gateway to Boracay.

Now we had been to Caticlan and Boracay last month but this trip took us a little longer than our previous one, about five hours. En route to our next RORO ferry in Caticlan my wife noticed a distinct, pungent odor.

“We must be near a piggery!” my wife exclaimed holding her nose.

Well, in fact, as the following two photos will attest, the piggery had come to us. Thankfully, for my spouse’s sake, our driver quickly whizzed by the porkers.

Me? The smell didn’t bother me that much. I remember as a kid riding with the family on old Route 66 in Central Illinois and being stuck behind many a truck packed with prime Illini piggies. 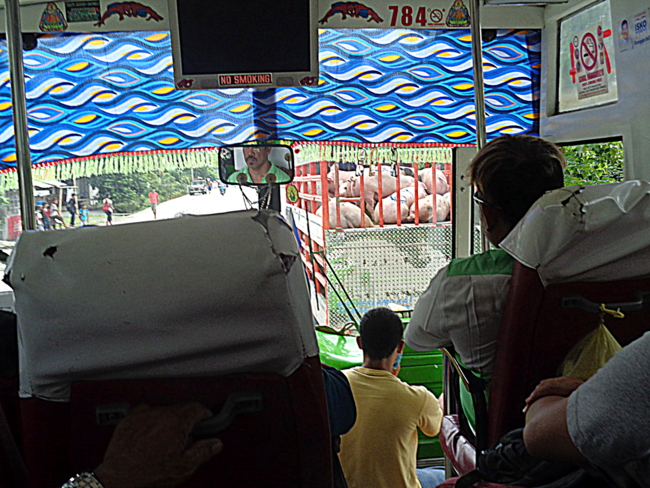 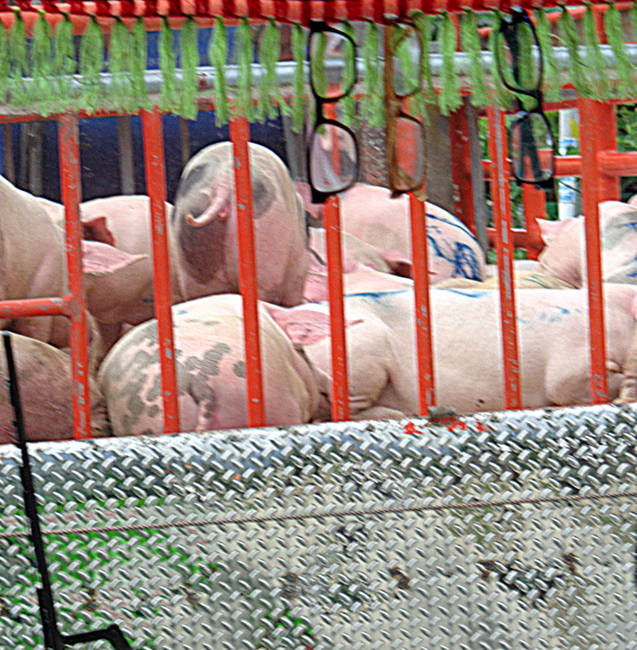 After lunch, I somehow was pushed back from my middle position and had to sit on the aisle seat. My asawa had lost her spot next to the window and sister-in-law Marjorie was now enjoying most of the breeze (and smells.)

I was offered the prime window seat but deferred. I regretted that later as a hard rain came down for a few minutes and Marjorie closed the windows.

After the rain stop I made sure the windows instantly came back up.

It wasn’t long, however, until we reached Caticlan. We boarded a Starlite Ferry after waiting about 30 minutes in an extremely warm bus. The RORO would leave at 4 pm. We had been traveling since 8 am and still had a long journey ahead of us.

As you can tell by the following picture, my wife, far right, and Marjorie, checking her text messages, were relaxing in comfort and taking full advantage of this break from the bus.

We had been taking it easy in a larger lounge with air con but upgraded to the following section at a cost of 80 pesos per head. It was worth the extra money to get reclining seats with flat screen televisions and less people. It was a welcome change after being cooped up in the Dimple Star bus. 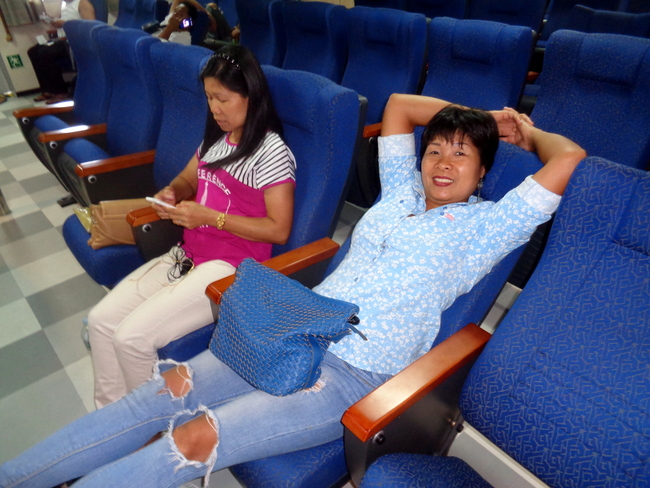 Oriental Mindoro was our next stop. We left the luxurious quarters of the lounge and made our way back into our Dimple Star bus. It was now around 9 pm. Much as we dreaded it we still had a two hour bus trip to our final ferry stop, Calapan. Here is where the fun really starts!

(Next up: The Conclusion: “The Dimple Star Road Trip from Hell: Guimaras to Manila”)