The Dimple Star Road Trip from Hell: Guimaras to Manila 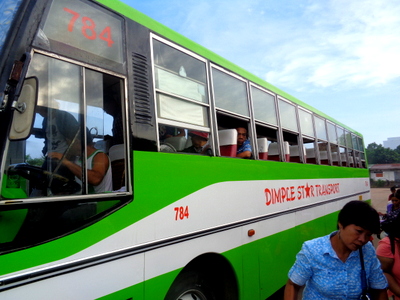 It took a few days, dear readers, but I’ve finally recovered from a recent trek to Metro Manila. “The Dimple Star Road Trip from Hell: Guimaras to Manila” beat the living snot out of this crusty old expat. By the beard of Zeus! Why would an American expat living in the Philippines subject himself to such torture in the first place? I retired to the Philippines over seven years ago. I knew there were other travel options such as flying via Cebu Pacific. 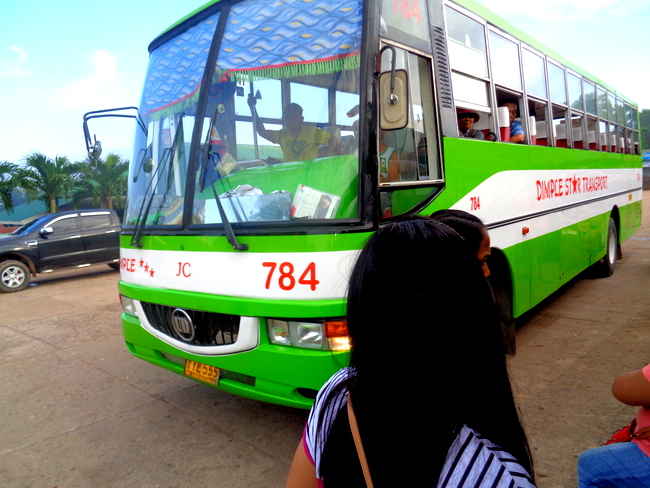 We also could have taken to the seas. That’s what we did on our return trip, though one of the passengers jumped ship en route (more on that in a later post.)

Common sense flew out out the window when I agreed to an almost 24-hour trip on a NON-AIR CON Dimple Star Bus.

My apologies to Dimple Star. They did their best. It’s not their fault I’m so cheap and stupid.

And as savvy geographically-minded readers already know, part of the trip had to be done on a RORO ferry. In fact, three different ferries. There’s no Guimaras (our home province) to Manila super highway and there never will be.

There has been talk for decades about an Iloilo to Guimaras highway. Politicians like Grace Poe always promise to build that highway every time an election comes around.

Iloilo is a short 15-minute pump boat ride away. But like Chicago Cubs fans who dream of a World Series victories for their beloved Cubbies, that road to Iloilo will never be realized, either. Put it right up there with the proverbial snowball’s chances in hell.

The main reason we took Dimple Star, aside from cost, 1200 pesos each, 25 US Dollars,  for our Guimaras to Manila ride, was my sister-in-law Marjorie.

Marjorie had been staying at our new home in the Philippines for a couple of months but had to catch a flight in Manila. The OFW, Overseas Foreign Worker, needed to return to her domestic helper job in Kuwait. She told her sister, my asawa, that she needed to take Dimple Star.

Why? Dimple Star would stop at a bus terminal in Metro Manila she needed.

At the bus terminal Marjorie would be able to take another bus to Novaliches. In Novaliches she would be staying with her oldest sister before leaving for the airport a few days later.

Now I’m sure that with a little research I could have found a bus terminal near Pier 4. Pier 4 is the port our 2GO ship departed from on our return trip from Manila. We could have gone by boat.

But I felt adventurous that day and advised my asawa to purchase our Dimple Star tickets in advance. The tickets could be obtained from our “New Site” Wet Market in Guimaras.

The “New Site” is just down the road from the “Old Site”. This wet market has vendors offering the freshest fish, meats, fruits and vegetables on our island province.

I was in the headquarters of Philippines Plus slaving away on an antiquated world wide web internet system courtesy of Globe which operates mostly on “Filipino Time” Our helper suddenly popped into my office and informed me that my asawa was trying to reach me.

I had been in the CR, Comfort Room, and never have my wife’s Globe Samsung mobile near me. She carries our Sun Samsung when she goes anywhere.

Our maid handed me the phone. The signal was breaking up as usual and my wife, irritated that she couldn’t reach me, was at the Dimple Star office, an eatery at the “New Site.”

She advised me that an air con bus was going to leave on July 12th. We were supposed to leave on the 13th but that bus did not have any air conditioning.

“What?” came my spouse’s anxious reply.

“Take the air con bus on the 12th. I don’t want to travel that far with air con. We’ll just leave a day earlier.” I said.

“OK, sure, I’ll just sweat all the way over and raise my blood pressure,” came my sarcastic reply, with the cell phone signal from Globe still cracking up.

“OK, I’ll get tickets for the 13.” my aswaa informed me, oblivious to my remarks about the lack of air con.

[Editor’s note: In the Philippines it’s common practice to pronounce only the number of a date. Even on Filipino television the broadcasters never use the th, nd, rd” and “st” when pronouncing a date.]

So that’s how I ended up on a Tuesday morning in Guimaras waiting for our Dimple Star bus to arrive.

We arrived at 6am in front of an eatery which served as the local Dimple Star outlet. The restaurant’s owner offered me two plastic chairs, one stacked on top of another, to sit my fat kano butt on. He set out a single seat for my wife and sister-in-law.

The proprietor obviously knew I had already dispatched three of the pale turquoise plastic chairs commonly found in the Philippines.

We started boarding the bus around 7:30 am. The owner’s wife graciously seated my wife and I first. There are perks to being a celebrity in the Philippines.

Finally, after calling out the name of one passenger several times, who never boarded to my knowledge, we began our adventure: “The Dimple Star Road Trip from Hell: Guimaras to Manila.” It was a journey I will never forget.