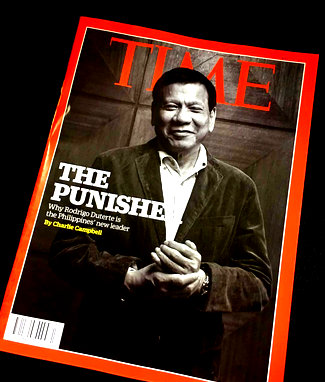 There’s a new sheriff in town: Rodrigo Duterte, the incoming President of the Philippines. Duterte has been called Asia’s Donald Trump. Like Trump, Duterte speaks his mind and doesn’t seem to care who he might offend, even if it’s Pope Francis, who he called a “son of a whore.”  Love him or hate him, you have to admit the new guy does have a set of balls.

“‘Rody,”‘ popular with the locals due to his successful zero tolerance policies against criminals in Davao, has earned the nickname “The Punisher” from Time Magazine. The Davao Death Squad, DDS,  tied to Duterte, is thought to be responsible for the execution of drug traffickers, criminals, gang members and other lawless elements.

Between 2005 and 2008 alone, more than 700 people went missing in Davao, presumably killed by the squad.

Duterte once told reporters, “I killed 700? They underestimated the figures.”

Reporters laughed, then one of them asked, “How many, Sir?”

As President, “The Punisher” has pledged to kill 100,000 criminals and dump so many in Manila Bay that the “fish will grow fat” from feeding on them.

Over a period of 20 years, “Duterte Harry” turned Davao City from the “murder capital of The Philippines” to what tourism organizations now describe as “the most peaceful city in southeast Asia,” and what numbeo.com ranks as the world’s fourth safest place.

Duterte is threatening to deport Indian nationals if they do not stop extending loans at exorbitant interest rates of 20 percent the moment he assumes the presidency.

He noted that some Indian nationals  lend money to Filipinos through the “5-6” scheme, where the interest rate is deemed usurious. Duterte added that some Indians, called “Bombay” lenders by the locals, would also force their customers to buy refrigerators and other items even though they do not have electricity.

“Those who practice 5-6 everywhere, they lend money and make people buy blankets and furniture. So I will talk to the ambassador because this burdens the Filipino, we are made to suffer on bended knees). The Filipino is suffering, sad and hungry. I have to stop it,” he said.

“I’d like to ask the ambassador of India to help us advise their nationals not to do it, that is too much, or I will deport all of them for acts inimical to the interests of the Filipino people,” he added.

[Editor’s Note: I had to look this one up, maybe you didn’t. “Inimical” means tending to obstruct or harm.]

He, however, emphasized that those who do not practice the 5-6 scheme will be left unharmed. “We love Indians. They have been good to us,” he said. 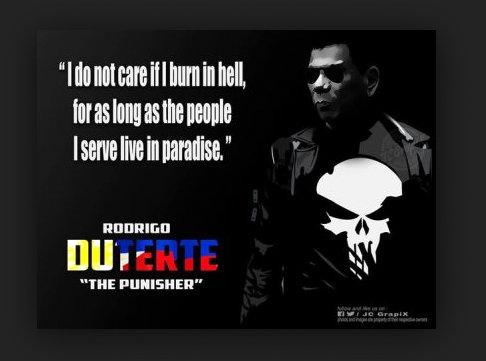 But rest assured, Bombay boys, there’s a new sheriff in town in the Philippines. It’s time to get out of Dodge.

Winning presidential candidate Rodrigo Duterte will also impose a nationwide curfew on children and is also considering banning the serving of alcohol after midnight, his spokesman recently announced.

The uncompromising mayor of Davao floated the idea a day after securing a landslide election victory built on a pledge to wage war on crime and corruption.

“Duterte will impose a curfew on unescorted minors past 10 p.m.,” spokesman Peter Lavina told reporters. He might also impose a liquor and curfew ban like in Davao in public places, upon consultation and a review of laws.”

As part of an all-out war on crime in Davao, Duterte has banned the sale of alcohol in public between midnight and 8 a.m.

Pubs and bars caught violating the law risk having their business permits revoked.

Those under 18 are also banned from drinking liquor and cannot go out without adult escorts after 10 p.m., while vehicle speeds are set at 30-40 kilometers per hour in some city sections.

The proposed liquor ban will not outlaw alcohol consumption inside people’s homes.

11 thoughts on “There’s a New Sheriff in Town: Rodrigo Duterte”