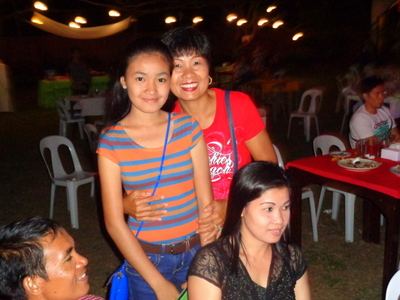 We kicked off the Chinese New Year with a celebration at the Mango Terrace in Guimaras. The Mango Terrace Pension Hotel, the former Shirven Hotel, is under new ownership and management. The establishment featured an all-you-can-eat buffet at 400 pesos a head, 8.50 U.S. Dollars, this past Monday evening to ring in the Year of the Monkey.

The new man in charge, Jack, came over to a long table where my lovely asawa and I sat with other expats and foreigners from our island province. Jack is a very personable Filipino and I commended him for hosting such an event. I remarked to him that after six years of living in the Philippines, I had never seen such a huge crowd at this establishment.

Our nieces and nephew from our mango province were also in attendance along with their Nanay, Mom, Alida, seen on the far left. Papa Joery, our brother-in-law, was also present but had left the table the time I took this photo.

Our youngest niece and nephew were there to see the advertised Dancing Dragons, who unfortunately, did not show up. There was some kind of excuse from the group, that was to come from Iloilo, that it looked like rain. It never rained one drop throughout the evening. Frankly, the Dancing Dragons were the main reasons the kids were there and they were quite disappointed. 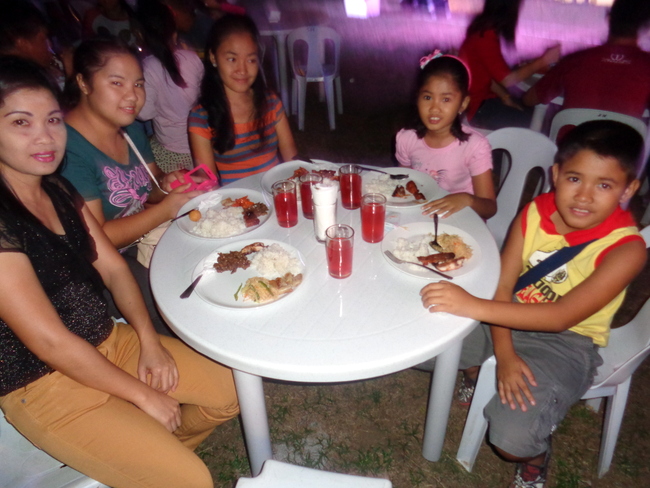 The buffet started on time and with a crowd I estimate at around 150 people. There were three tables set up throughout the grounds of the Mango Terrace featuring chicken, sweet and sour fish, rice (of course), bihon, and beef sisig. 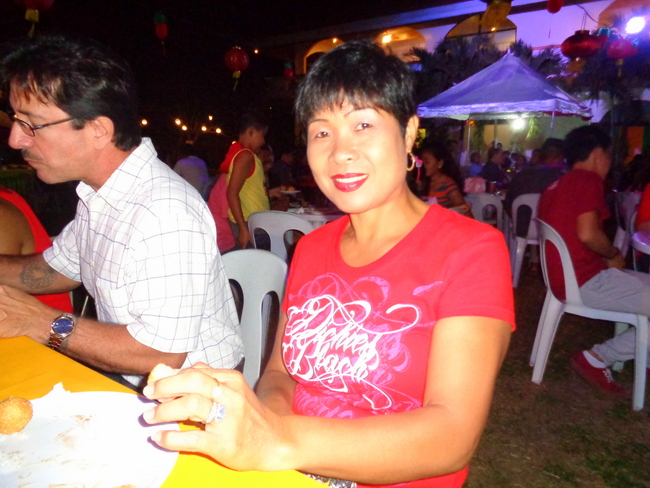 That’s my sparkling spouse, The Sainted Patient Wife, sitting next to one of our American expat friends, Steve. 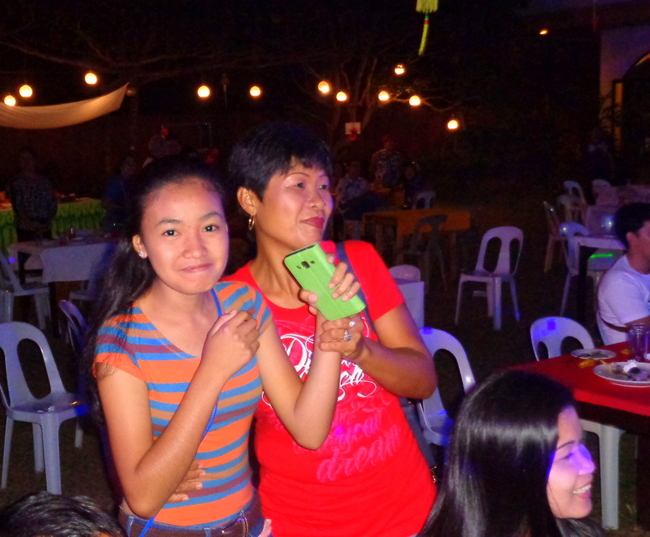 Niece DenDen and my beautiful wife

Unfortunately, food quickly ran out, save the rice, at all three buffet tables. After several inquiries directed at the wait staff we were informed that more food was on the way.  I would estimate that it was around 30 minutes or so before the next batch of food arrived.

You had to be quick, however, because once the new grub was served, the hungry massed descended on the buffet tables like voracious vultures, leaving nary a crumb behind.

We were fortunate to have one of the servers drop off a plate of chicken wings for us at our new table. Captain Tom, on a three-week furlough from Florida, had secured a table away from the stage where live musical performances were drowning out any possibility of conversation.

Tom, seen below,  is accompanied by one of my wife’s hundreds, if not thousands, of relatives on the island, the lovely LenLen, in the next photo. The couple plan to be married. LenLen will join The Captain in the United States once the necessary Immigration paperwork is completed. 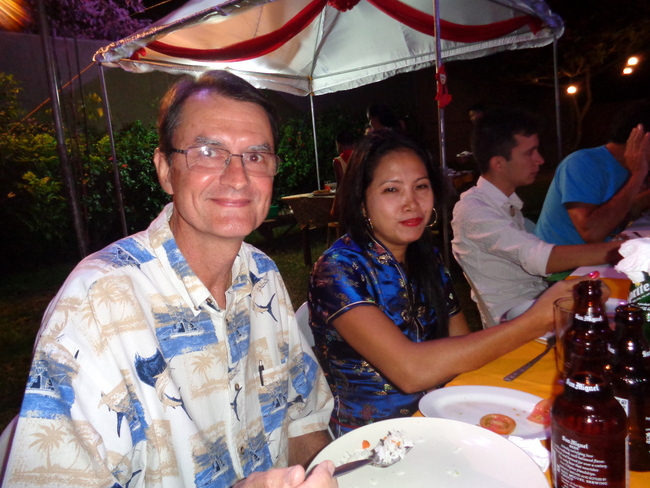 The music began with a few solo performances which included a Frenchman playing an accordion. I haven’t been to any Chinese New Year celebrations prior to this, but I doubt that many of the Lunar New Year’s events included any accordion players.

I, however, am no stranger to the accordion, having been raised in Central Illinois and having Slovak relatives on my Mom’s side of the family. Whenever we visited my Aunt and Uncle in the local Slovak neighborhood of our small town, my aunt would always have a program broadcast from a St.Louis TV station which featured polka music.

Every Saturday afternoon my aunt would sit with with her two toy terriers, Pixie and Dixie, with a Camel cigarette dangling from her lips and a cold bottle of Busch beer in her right hand, listening to her favorite polka performers. 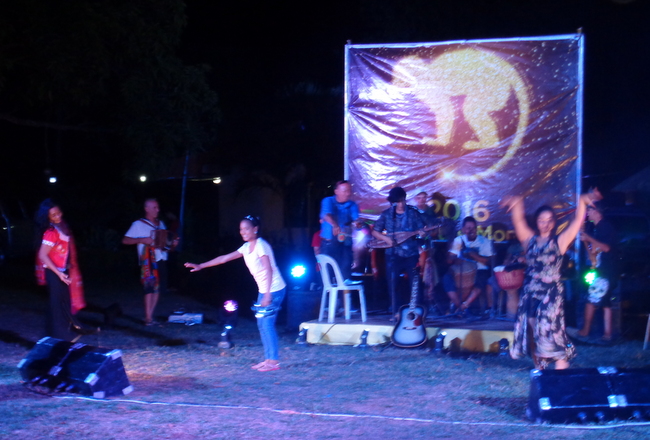 My own asawa, who only had consumed one shandy, a beer and Sprite combination, joined the dancers from the live band on stage. My wife loves to dance. Me? I usually sit and watch. 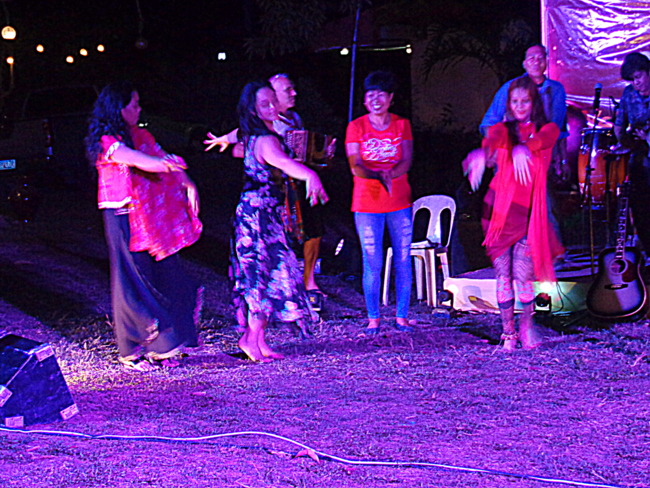 I, did, however, while watching the dance performance, manage to snatch a chunk of chicken from a tray of a waiter who was passing by. Good thing. Once that plate of chicken hit the buffet table, it was gone quicker than a deadbeat dad trying to avoid child support. 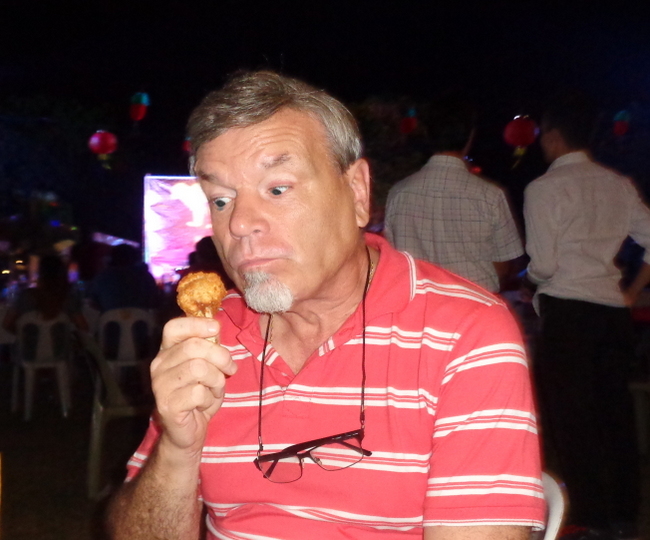 Of course, Captain Tom, who had quaffed a bottle or two of San Miguel Pale Pilsen at this point, joined in the festivities. Tom, known throughout the Orlando Florida area for his dancing skills, also participated at a local Manggahan Festival while living in Guimaras several years ago. 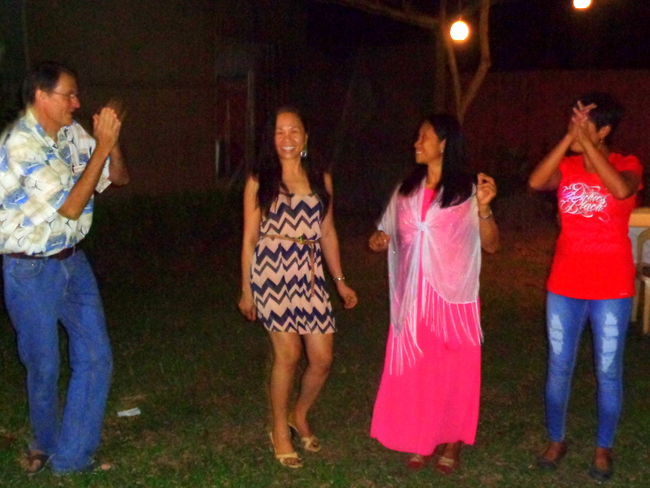 I commend Jack and the crew at the Mango Terrace Pension for a terrific Lunar New Year’s celebration. I know he has other events planned at the hotel and look forward to what he will come up with next.

The Mango Terrace, in San Miguel, Jordan, Guimaras, has also drastically reduced their room rates and now offer their prime rooms, such as the Cashew Crunch, Citrus Spill, Pineapple Jam, and Mango Sweet Rooms for as low as 1,100 pesos a night. That’s 800 pesos cheaper than the previous Shirven Hotel rates. At around 23 U.S. Dollars a night, that’s a terrific bargain for a quality hotel.