A Good Man in Guimaras is Laid to Rest 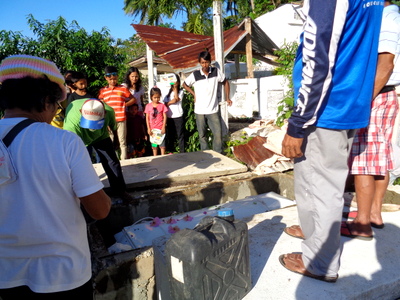 A Good Man in Guimaras is laid to rest. Our worker, Melchor Tacaisan, 42, was laid to rest this past Sunday afternoon, at St. Michael the ArchAngel’s Church in San Miguel, Jordan, Guimaras.  Melchor is survived by his wife and five children, ranging in age from two months to a daughter in her first year of high school.
Our friend and employee was savagely gunned down by his younger brother, Paterno, during a birthday celebration outside of their parent’s home in Guimaras at 8:10 pm on January 20, 2016.

Melch had worked for us for over a year and was an integral part of the crew that built our new home in the Philippines. He was also a laborer on our new pool project in the Philippines and would always greet my wife and I every morning. It’s hard to believe that such a good man is gone. 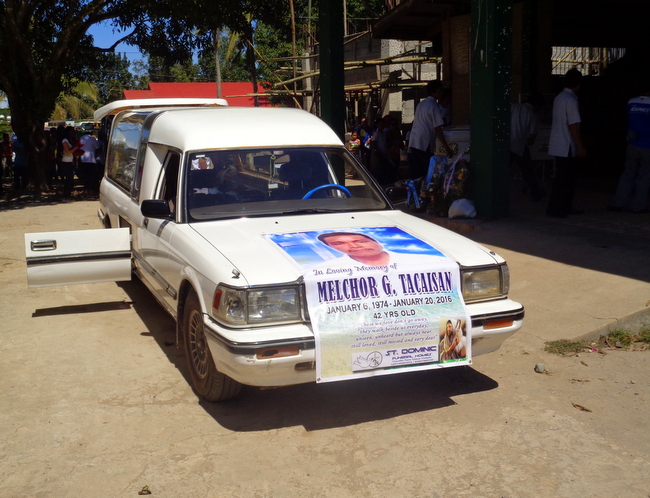 A funeral mass was held for Melchor. St. Dominic Funeral Home handled the arrangements. The mass, held at the same church my asawa and I were married in, was about 90 minutes long.
I had never attended a Catholic funeral mass before despite having lived in the Philippines for over six years now. I have visited a few cemeteries when bodies of loved ones were being laid to rest. 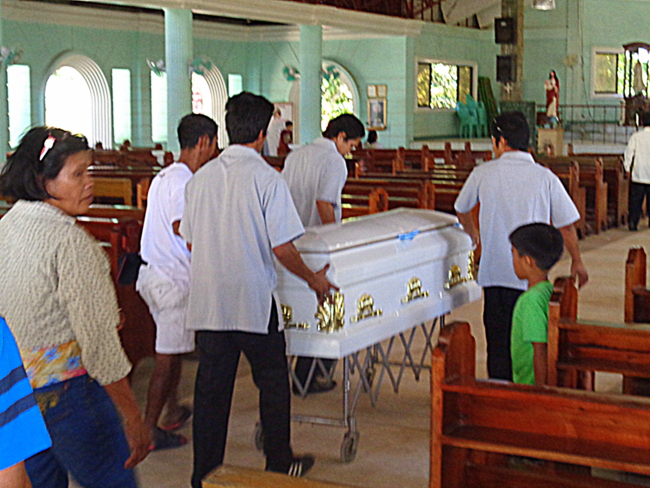 Melchor’s coffin is brought up to the front of the church. We arrived for the mass 45 minutes early but by the time the service began, the church was almost full, with a crowd I estimate at around 350 mourners. 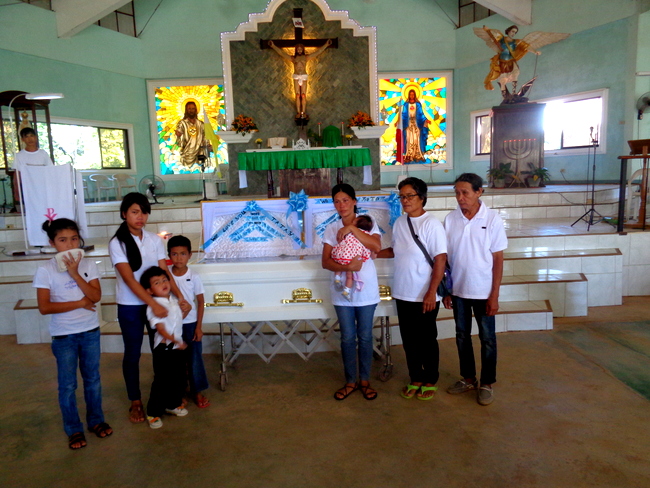 His five children, shown above, along with his wife and Mother and Father gather around the casket after the funeral mass. He had two sons and three daughters. 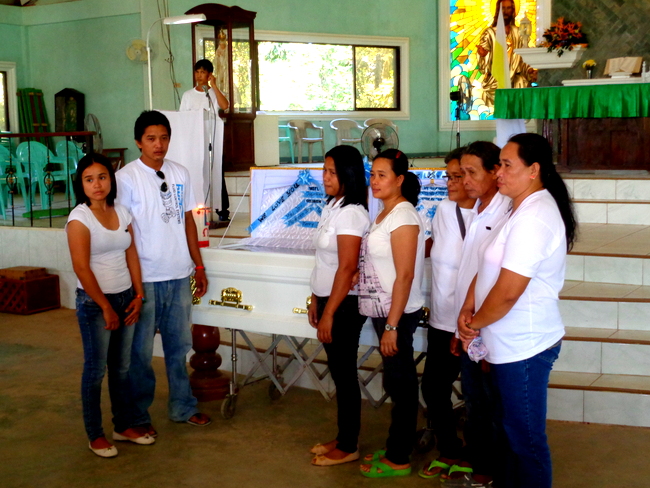 Melchor’s siblings are shown in the photo above. Other relatives gathered around after this shot to also have their pictures taken around Melchor’s casket. 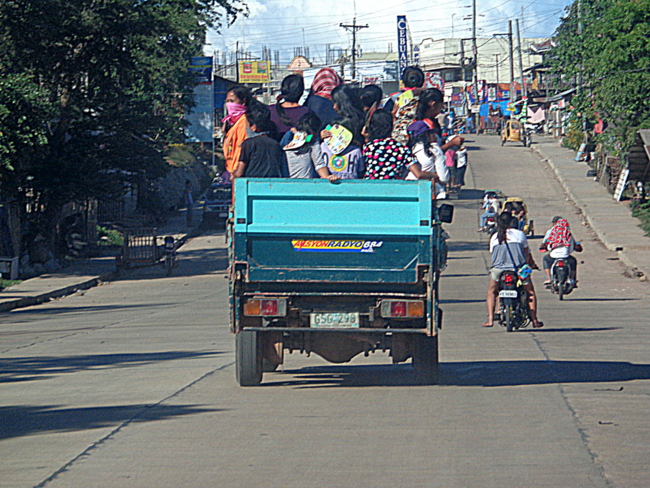 There was a caravan of vehicles on the way to the Jordan Municipal Cemetery that hot, dry dusty Sunday afternoon.
We followed behind this vehicle in our Ford Ranger XLT. Once we got out of San Miguel proper, the funeral procession was able to proceed without interruption and allowed to go through a PNP, Philippine National Police, checkpoint, without having to stop. 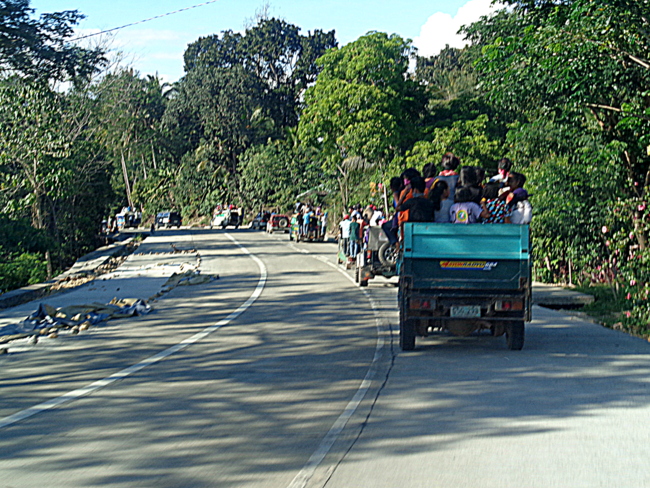 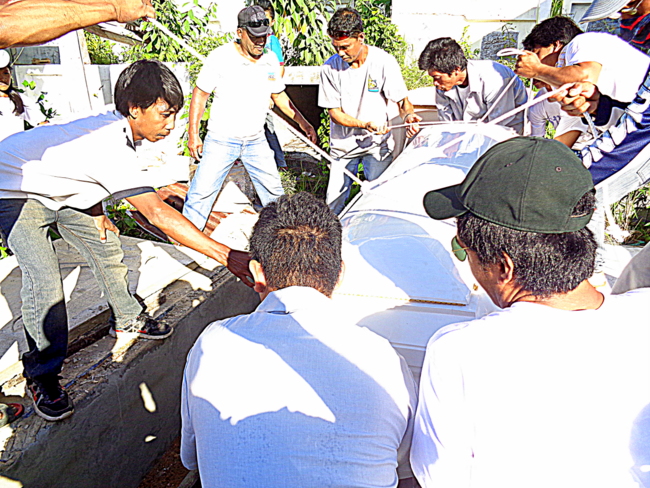 After a long and winding walk uphill, Melchor’s casket is laid to rest. There were times when the funeral home employees had to really struggle to get the coffin through some narrow passageways in the cemetery which is almost full. My asawa informs me a new cemetery is going to be built in Guimaras. 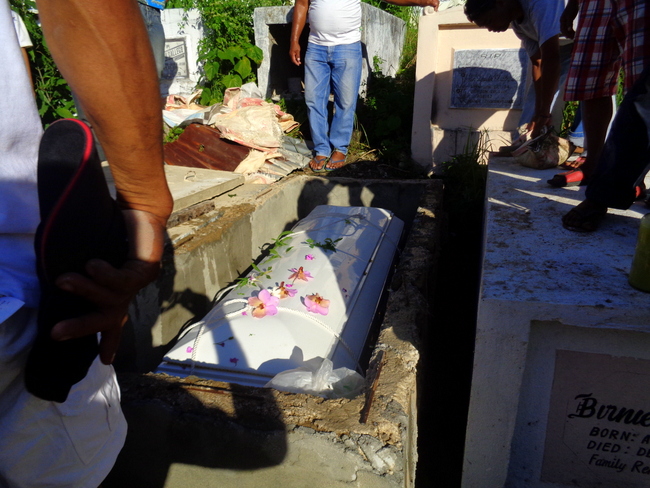 We pause to throw flowers on our friend’s coffin, saddened, but believing in our hearts and souls, that he is in a better place now, resting in the arms of our Savior, Jesus Christ.