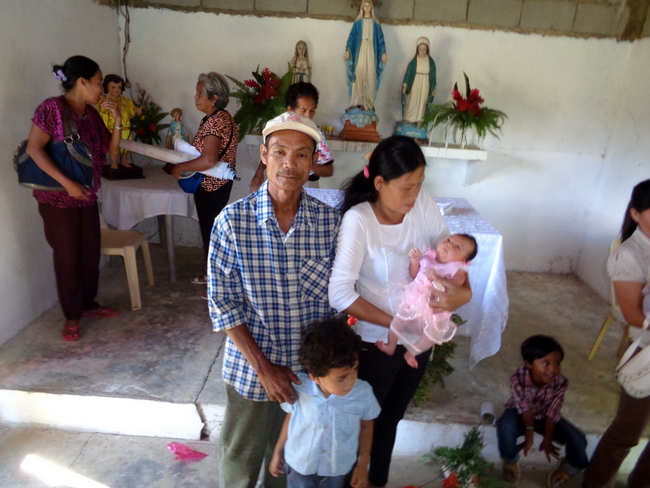 I was inside working on the 2016 updated, revised version of my book, “The Philippines Expat Advisor.” I heard my asawa talking to someone outside. I peeked from my man cave window and noticed it was one of our former workers, Melcher. He had some coconuts. Not surprised, he’s the nephew of the brothers that sold us our property and he’s a neighbor. My wife had sent some leftover Christmas fruit salad to his Mother via our nephew Sherwen the day before. After his visit, I was informed that we would be in attendance for the christening of Merry Joy in the Philippines the next afternoon.

We were to be a “Ninang,” Godmother,  and “Ninong,” Godfather,  to the latest addition to Melcher’s family, a baby girl born only two weeks ago.

The christening, baptism, for Merry Joy was to be held at Mass during a fiesta at our local barangay at 1 pm. My wife came into my headquarters to inform me and explained that it is considered taboo to turn down a request to become a Godmother or Grandfather.

I informed her that I had no problem with it. We are already Ninang and Ninong to  a little boy, relatives of good friends of ours; the husband is an Australian expat who only lives only a 15-minute walk from our new home in the Philippines.

My asawa buys the little guy gifts for his birthday and Christmas and brings him snacks whenever we visit our friends, who live nearby the tot.

Me? I don’t even know when the kid’s birthday is. Many Filipinos take this responsibility seriously. I respect that tradition but let my wife handle all the cultural niceties involved in living in the Philippines. I just try not to act like a butt hole around the kid since a Godfather and Godmother are supposed to be good influences. 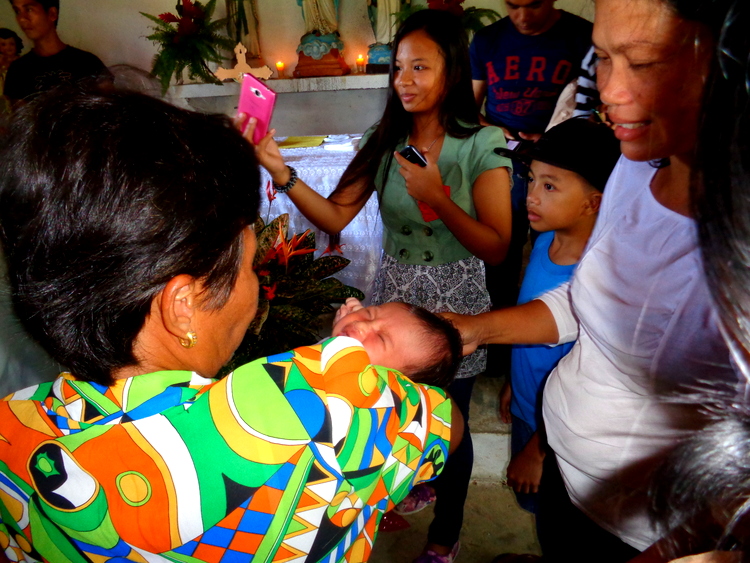 My wife stood near the proud Lola, Grandma, seen cradling Merry Joy in the picture above. That’s Mom on the right. My job was to take pictures. It was difficult to get a good shot as the small church, which barely held 60 people, including lizards, didn’t give me a lot of room to work in.

I’m sure the local priest from the municipality of Jordan appreciated the flash from my camera going off. I could have turned it off but the room was too dim to take a decent picture without it. Hopefully I will be forgiven this inconsiderate behavior in the House of God.

But I think the bonehead who kept their cell phone on should be banished to purgatory for eternity. 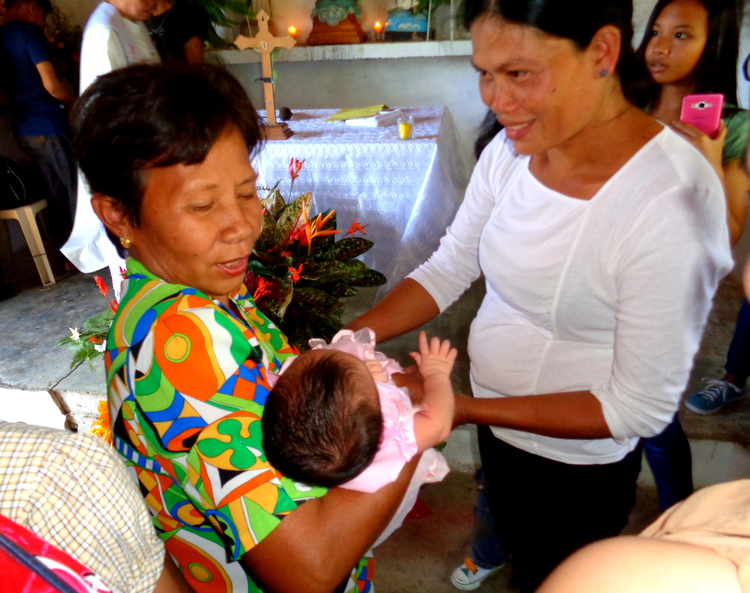 I managed to get a photo of the priest blessing little Merry Joy. Though the christening was to be held at one, it was 1:45 before the ceremony began. But Father whipped through his duties in record time, and with only two babies to be baptized that day, he finished in about 15 minutes. 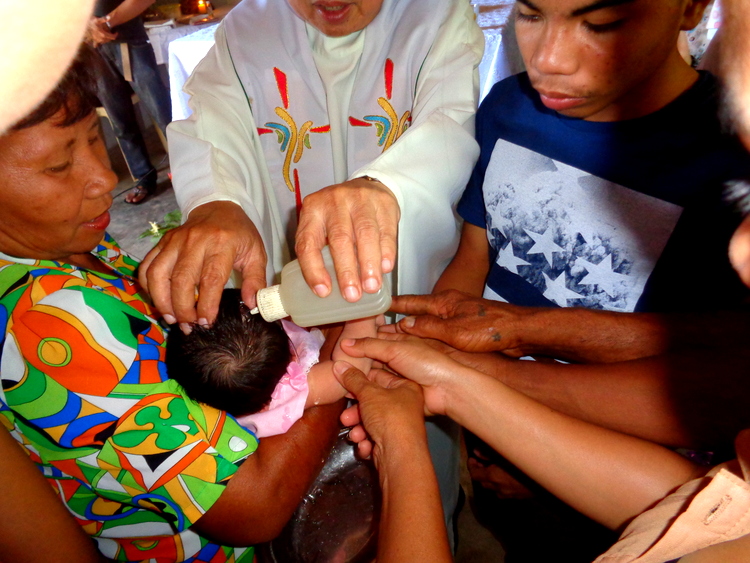 That’s my lovely spouse on the left in the next photo along with some other relatives of Merry Joy. Please don’t ask me their names. I’ve lived in the Philippines for over six years and have met a ton of my wife’s own relatives. When we meet them again, I rarely remember their names or that I had even met them before.

Most of the time when we meet one my wife says to me: “You remember Cousin TinTin, right?” “Oh, sure, ” I reply, “how are you?” Later I have to ask my wife when it was I met Cousin TinTin in the first place. 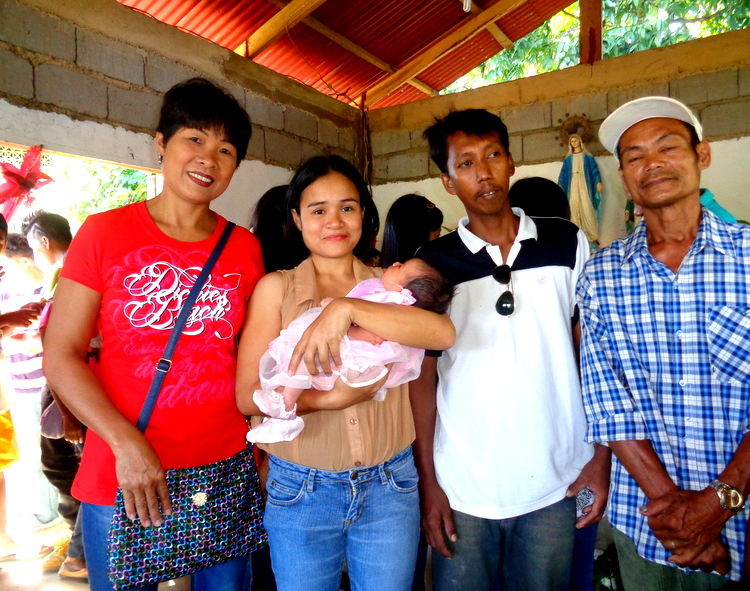 That’s me, The Kano, in the next picture. I’m wearing a new MaxWear polo shirt my wife got me for Christmas. You married guys probably already know this but it’s always a good idea to wear clothes your spouse gets you as soon as possible. The fact that I wore the shirt in public and at a Mass Christening scored major points for me. 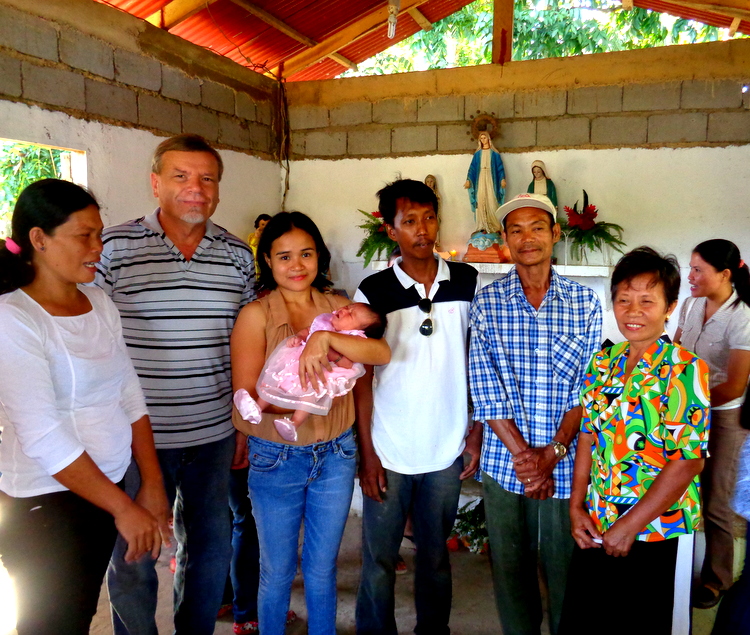 Here’s the proud “Ninang” holding the newly christened baby. I don’t hold babies. I figure they’re going to pee, poop or spit up on me and I’m also afraid I might drop them. 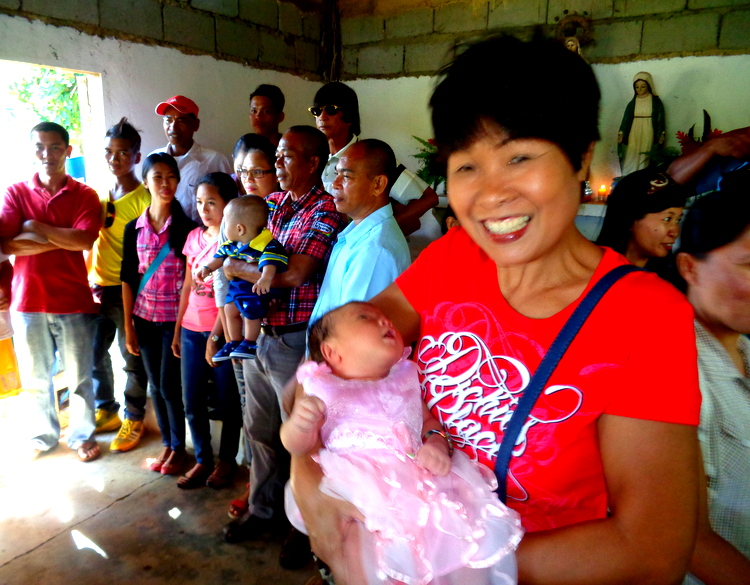 After the ceremony we headed out to Melcher’s Mom’s house, only a few minutes walk from our own home and the barangay church to celebrate the blessed event with a little food and drink. 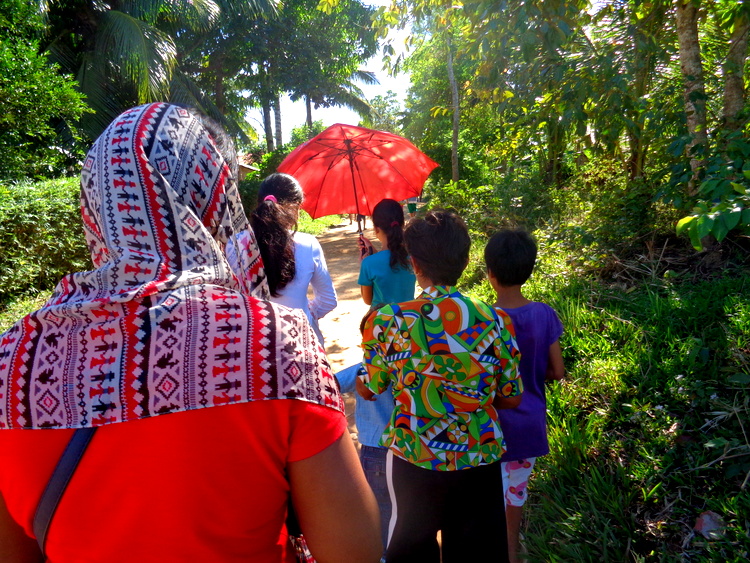 We ate some bangus, milk fish, quaffed a bottle of Royal orange soda, and hung out for about 90 minutes. Every one kept bringing us more food and Melcher hopped on his motorcycle to buy me three bottles of San Miguel Pale Pilsen. I only downed one of them and left the rest for Melcher.

On the way out we saw these kids who were excited to see a “kano.” They were quite friendly and having a great time playing on the tricycle. I jokingly asked if the trike belonged to them and they just laughed.

“The Christening of Merry Joy in the Philippines” was a happy event and we were proud to be a part of it. Another day in the life of an “American Ambassador” in paradise. 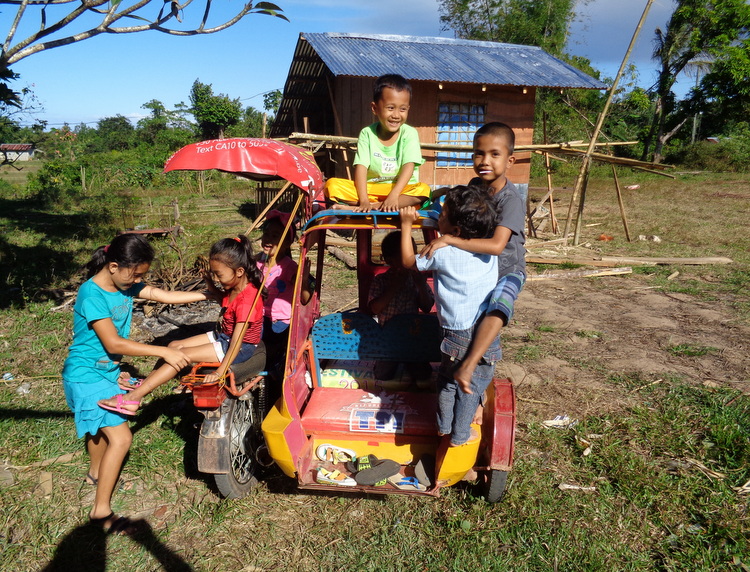 3 thoughts on “The Christening of Merry Joy in the Philippines”