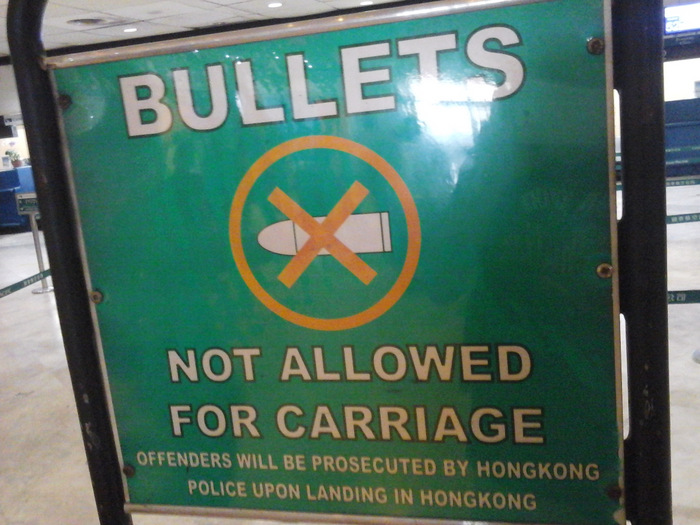 Travel Advisories in the Philippines

China has issued travel bans because of their ongoing dispute in the South China Sea with the Philippines. A travel advisory issued by Beijing has caused a disastrous fall in arrivals from China.

“We are worried and we are affected,” said Dionisio Salme, president of the Boracay Foundation Inc., the island’s resorts’ association.

While bars and clubs on Boracay’s main beach are said to be still crowded with Filipinos and tourists from other countries, the large resorts which take in busloads of Chinese tourists are almost empty.

In its advisory, the Chinese Ministry of Foreign Affairs cited a “worsened security situation in the Philippines” that may see Chinese nationals targeted. (Source: BBC)

The Department of State warns U.S. citizens of the risks of travel to the Philippines, in particular to the Sulu Archipelago, certain regions and cities of the island of Mindanao, and the southern Sulu Sea area. (Oct. 21,2015)

Yep, pilgrim, it’s the usual warning the State Department has been putting out for years. BUT, and this is a bigger butt than Kim Kardashian’s,  you still need to pay attention to the advisories.

The Abu Sayyaf Group is demanding P1 billion ($21 million) each for the release of the hostages abducted in a resort on Samal Island, Davao del Norte last September 21.  Samal is a 15 minute boat ride from Davao City.

Please try to maintain some kind of low profile. These guys were hanging out on some luxury yachts.  Sweet crackers! A white guy in the Philippines stands out like a turd in a punch bowl. Take my word for it. I know my turds.

Abu Sayyaf members are threatening  to kill the hostages if their demands are not met. 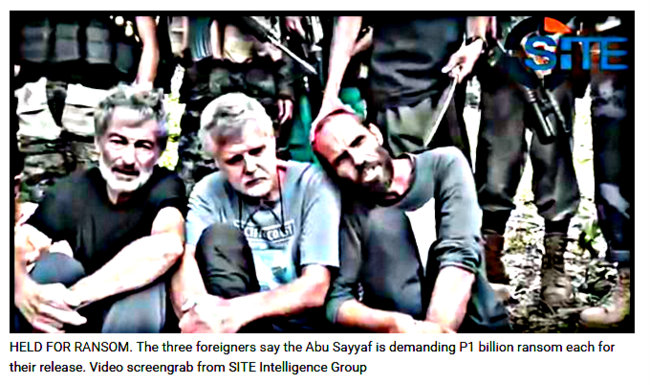 According to the State Department, over the past nine months, at least 15 separate kidnappings have been reported across Mindanao.

That said, readers like Todd, Tom Ramberg and others have spent extensive time in Mindanao without any problems. Folks, as I point out in my e-book, “The Philippines Expat Advisor,” you have to exercise some good COMMON SENSE.

Do you think I walked the streets of downtown Chicago without some trepidation? I always traveled with a group or at least one companion. That’s good common  sense no matter where you live.

The State Department strongly recommend that U.S. citizens traveling to or residing in the Philippines enroll in their Smart Traveler Enrollment Program (STEP). STEP enrollment gives you the latest security updates, and makes it easier for the nearest U.S. embassy or consulate to contact you in an emergency. If you don’t have Internet access, enroll directly with the nearest U.S. embassy or consulate.

The Brit’s Foreign and Commonwealth Office (FCO) advise against all travel to southwest Mindanao and the Sulu archipelago because of on-going terrorist activity and clashes between the military and insurgent groups.

The FCO advise against all but essential travel to the remainder of Mindanao for the same reasons.

The Limeys note that there is a high threat from terrorism, including kidnapping. Information as of late October 2015 indicates that kidnap for ransom groups may be planning operations in North Mindanao including the islands off the coast.

Latest advice, 30 Oct 2015
The Aussies intel coincides with their British counterparts. Information of late October 2015 indicates that militants may be planning a kidnapping operation in North East Mindanao, including the islands off the coast.

Resorts in the area are being notified to take extra precautions. Expect increased security and travel disruptions during the period surrounding the APEC Leaders week 16-20 November.

The level of advice has not changed. The Land of Oz continue to advise its citizens to exercise a high degree of caution in the Philippines.

The Australian government advises visitors to exercise a high degree of caution in the Philippines due to the high threat of a terrorist attack and the high level of crime.

These so called “tanim bala”  [planting of bullets] incidents have SURGED in 2015 at the Manila Airport.

(C’mon guys, I know you’re not looking at the luggage in this photo)

Some workers at the Ninoy Aquino International Airport have been extorting money from travelers by planting bullets in their luggage.

The head of the Department of Transportation and Communications (DOTC) wants the public to put things in perspective.

The 0.004 percent translates to 1,510 people.  Abaya lamented that the so-called laglag-bala or bullet planting scandal had been blown out of proportion and there is no syndicate known to be behind the scam. (Source: Yahoo! News)

Abaya goes on to state that “Although we are talking about statistics in the decimals, let me emphasize that a single case of any passenger wrongly charged, extorted upon by planting and unjustly charged in court is unjust. It is not something that government should ignore. It is something that it should put full force and attention to and likewise it is a great concern for the state,” he said.

No matter how small the number of incidents, this bullet planting scheme has given the Philippines a black eye and will certainly have some negative impact on its tourism.

Is travel to the Philippines safe? Yes, in my opinion. I’ve lived in the Philippines for over six years without as much as getting my pocket picked on jeepneys. Again, exercise some good common sense and you’ll be just fine.

6 thoughts on “Is Travel to the Philippines Safe?”